I know some people are going to grouse that it’s too early. They don’t want to have to think about Feb. 2 and the elections to be held th 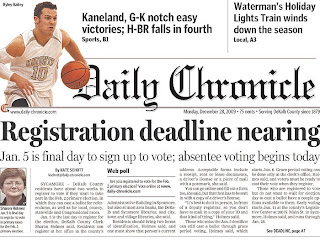 at day until after they’ve recovered from their New Year’s hangover.

But considering that it was possible for some people to begin casting their votes for a U.S. senator, governor, other statewide officials and legislators beginning Monday, that probably means it is time for us to kick outselves out of apathetic mode and consider who they want to vote for.

NOW I’M NOT about to preach to you at this point who should get your vote. I don’t think you’d listen to me if I tried.

This is more about the whole concept of casting a ballot, and why it should matter.

People who are voting now are the ones who for whatever reason cannot make it to the polling place on Feb. 2. So they’re using an absentee ballot. Under changes in state law, it is being made easier to use the absentee process because one no longer has to give a specific reason why they can’t show up on Election Day.

Of course, the one time in my life I used an absentee ballot, all I told them was my job at the time would have me out of town on Election Day (which was true), and it was accepted. No one challenged me or demanded that I prove I had to be in another city.

SO WE HAVE the option of people headed to their clerk’s offices for the application to get the absentee ballot.

That is, of course, if they don’t just decide to wait a while for the early voting centers, which will be opening up soon enough (Jan. 11, to be exact).

For what it’s worth, I used an early voting center the last time I cast a ballot. I happened to be near a facility on other business and noticed they were virtually empty. I was able to get in, get my ballot, cast it and leave within minutes.

There was a certain convenience to it, and I may do the same thing some time during the coming month if I get the chance.

THERE IS A part of me that is a little saddened at the thought that the actual Election Day has the potential to become less important. Rather than being the collective day we gather to pick our leaders, it merely will be the day we expect to hear the results of elections that have been ongoing for over a month.

But at least it does encourage people to vote, which ultimately is a good thing.

Because for all too often, the people who can’t stand measures that boost the voter turnout are the political partisans – the ideologues who are so wrapped up in their causes that they can’t stand to think that other people might think differently.

And I’m not singling out any political party on this ground. I have heard the ridiculous rants from officials of all sides.

SO NOW, WE have to start thinking about what kind of electorate we truly are when we cast our votes. I’d like to think we are the responsible type who put great thought into picking officials who will represent our public interest.

There I go again, sounding as naïve as a Chicago Cubs fan who every spring thinks that this is FINALLY the year their favorite ballclub will win a championship of sorts.

It ain’t gonna happen on the baseball field, and it probably won’t happen at the voting booth either.

This is going to be the extremely partisan electoral cycle where we are going to hear the name “Blagojevich” screamed at us so many times like it is an epithet. How many voters will be swayed is something I am unsure of.

MOST PEOPLE I have encountered are either inclined to disregard it, or their disgust level with electoral politics has become so intense in the past year that they are most likely to ignore Election Day altogether.

I have no doubt that some people will say they are voting knee-jerk Republican as a response to the former Illinois governor’s behavior in office. Yet I can’t help but think that the bulk of those people are ones who NEVER under any circumstances would have picked the name of a Democratic Party candidate on a ballot. This is an election cycle where I am not inclined to predict now what will happen due to the ballots that are being cast over the course of the next 35 days.

Of course, I can think of one more positive aspect to the idea of early voting. If it means that fewer people actually wait until Feb. 2 to vote, it means there is less reason for candidates to engage in the last-minute bursts of negativity (particularly on television) that turns off many real people.

That would be a positive.

EDITOR’S NOTES: There are going to be countless libraries, park district buildings and schools throughout Chicago (http://www.chicagoelections.com/page.php?id=9) and the surrounding suburbs (http://www.cookcountyclerk.com/elections/earlyvoting/Pages/EarlyVotingLocations.aspx) that will serve as polling places in coming weeks – for those people who just can’t wait until Feb. 2 to express their political preference.

This might have been written from the perspective of the suburban Cook County voter, but the procedures (http://www.cookcountyclerk.com/ELECTIONS/EARLYVOTING/Pages/default.aspx) for casting an early ballot are identical across the state of Illinois.
Posted by Gregory Tejeda at 12:01 AM