A DAY IN THE LIFE (of Chicago): Winter street “dibs” is anti-Chicago spirit

Now that the “holidays” are over with the completion of Christmas and Hanukkah (and proceeding through Kwanzaa), the bulk of 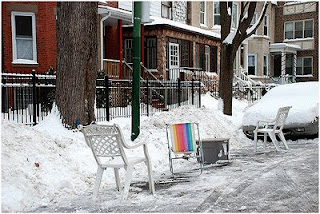 us can move on and accept the fact that we’re now in winter.

And with the coming of the heavy snowfalls of recent days, we’re going to get to hear more blowhard rhetoric from people who claim they’re “sticking up” for their inalienable right to park in front of their home – even if it means they have to turn the street into a junkyard in their attempt to “claim dibs” on a parking spot.

COUNT ME AMONG the ranks of those who thinks it downright ridiculous that Chicago would want to claim this bit of selfishness as some sort of character trait.

But there are those who will claim it is part of what makes Chicago unique that some of us think we have the right to own a parking spot for our automobiles once we have dug them out of the heavy snow.

These people think that because they were inconvenienced by snow, they now deserve some sort of perk. That’s ridiculous.

To me, it is one of the realities of urban life that automobile parking is inconvenient. I accept it as a fact that when I venture into certain neighborhoods of the city, it will be difficult to find a parking spot if I choose to bring my car. On days when it snows and some potential spots get covered over, it becomes that much more difficult.

SO THE IDEA that some people think they can “own” the space where their car was just because they had to dig out the shovel is so anti-urban. If you’re really that determined to hang on to that parking spot, then perhaps you shouldn’t move your car.

My basic philosophy on this issue is “you move your car, you lose the spot.” If you want to be able to drive around and have some sort of guaranteed parking near your humble abode, go live in a suburb.

Those people who insist on cluttering their vacated spots with old chairs or other junk are merely one step up from litterers. I have no problem with the police treating them as such. The fact that the Chicago Sun-Times went so far Sunday as to editorialize on the side of the nitwits (http://www.suntimes.com/news/commentary/1958985,shoveled-own-it-editorial-122709.article) is a holiday-season embarrassment for the newspaper.

What other “issues” are of concern to those of us who choose to live on the shores of Lake Michigan at this time of year, rather than along the Gulf of Mexico or some other place with warm weather?

I WISH THEY’D MAKE UP THEIR MIND: My brother, Chris, and I have always joked about Sam Sianis, the long-time owner (and nephew of the founder) of the Billy Goat Tavern, whom we claim will go along with any gag if it means free publicity for his chain of establishments.

So it wasn’t any surprise (to me, at least) that Sianis played along with celebrations marking the 75th anniversary of the opening of the original Billy Goat on Madison Street near what is now the United Center.

He even went so far as to correct Gov. Pat Quinn, who according to news reports botched the old “no fries, cheeps” line from the old Saturday Night Live sketches that allegedly were based on the Billy Goat shtick.

The problem is that I know that at least one of the Billy Goat locations, at 303 S. Wells St., actually serves fries, no cheeps. Not that they’re particularly good fries. Besides, there’s still the sentiment that the only “real” Billy Goat (http://www.suntimes.com/news/metro/1960293,billy-goat-cheezborgers-122709.article) is the one on Hubbard Street underneath Michigan Avenue.

WILL LES EXPOS LIVE ON?: I understand that Chicago Cubs fans are going to get all worked up into a lather over whether former outfielder Andre Dawson deserves to be in the baseball Hall of Fame. He had a couple of respectable years playing with the Cubs in the late 1980s.

Perhaps I should say more than “respecta 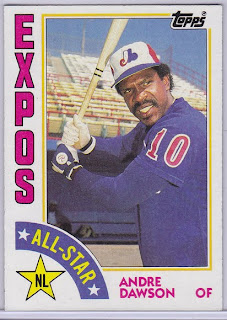 ble,” on account of that Most Valuable Player award he took while (http://www.chicagonow.com/blogs/league-of-her-own/2009/12/chicago-cubs-headlines-for-sunday-let-the-annual-hawk-in-the-hall-discussion-begin.html) playing for a last place Cubs team.

Yet I’m just wondering how much Cubs fans are going to rant and rage if Dawson actually gets 75 percent support from the sportswriters who will vote this year, on account of the fact that Dawson actally played more seasons and had the bulk of his best years as a player with the now-shuttered Montreal Expos.

Will we have to endure some sort of claim that the Cubs are being slighted when Dawson’s bronze plaque depicts him wearing the “MB” logo of the Expos rather than the cutesy “C” of the Cubs? It will be even more ridiculous than the occasional White Sox fan who still rants that Carlton Fisk’s plaque emphasizes his time with the Boston Red Sox.

While I became of a fan of Andre's when he donned a Cubs uniform, I'm a fan of his period. I don't care if he is enshrined as an Expo or a Cub as long as he gets in. It's amazing he hasn't been inducted yet considering he is only one of three players to amass 400 HRs and 300 SBs and has 8 Gold Gloves. 2010 is The Hawk's year!

Charley
Andre Dawson for the Hall of Fame
http://www.hawk4thehall.blogspot.com