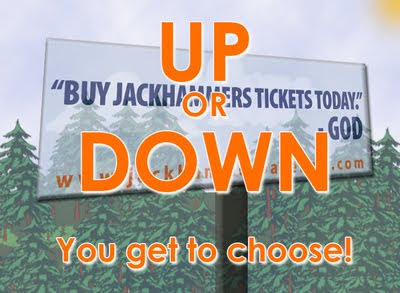 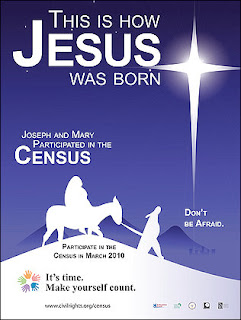 there should be more Latinos serving as elected government officials both tried to use imagery inspired by the religious in their new campaigns, which means both groups are getting hit with accusations of having committed blasphemy.

IN THE CASE of the NALEO, they are trying to encourage Latinos to realize they should take it seriously next year when the Census Bureau sends them a form so they can be included in the official population count. For the Jackhammers, they’re trying to sell season tickets for 2010.

How does religion get involved in either of these “causes?”

For NALEO, they cited portions of the New Testament that would indicate that Joseph and Mary were headed to Bethlehem so they could be included in something resembling a modern-day Census, which would mean the baby Jesus was born just in time to be counted.

Their advertisements literally tell us, “This is how JESUS was born,” and adds later, “Don’t be afraid.”

NALEO IS ONE of about 136,000 groups cooperating with the Census Bureau to try to get as accurate a count as possible in the Census, which officially records how many people are living in the United States on April 1, 2010.

They’re claiming that nothing is inappropriate with their ad, even though the Washington Post recently reported that some Latinos are seeing blasphemy in the very mention of Jesus, or at least a lack of respect for the so-called Son of God.

Of course, some of the people who are most critical are the ones who are trying to inspire Latinos to engage in a misguided boycott of the Census process altogether. They think it will show the rest of the country that we’re disgusted with the way we’re often overlooked, although I still thinik it will merely delight the nativist element that would prefer to think we don’t truly exist and would use an inaccurate Census Bureau count as some sort of justification of their xenophobic thought process.

Then, there is the Jackhammers, a professional baseball team in the Northern League.

THEY’RE TRYING (LIKE they do every winter) to get local businesses and other fans to buy tickets in advance. It helps the ballclub if they have the revenue from ticket sales already on hand before the season starts.

Part of their campaign is a billboard on Interstate 80 near Joliet, Ill., that says, “Buy Jackhammers Tickets Today” and attributes that quote to “God.”

Does the Almighty really have nothing better to do with his/her/its time than look down upon this planet and watch Jackhammers’ ballgames? With all the success they have had throughout the years, I would have thought God to be a New York Yankees fan (does that make the ’04 championship of the Boston Red Sox some sort of Satanic plot?)

Now if one goes to the Jackhammers’ website (http://jackhammerbaseball.com), an explanation is offered that people who buy a season ticket package during the month of December can have the ballclub donate a portion of the purchase price to any church or religious organization the fan chooses.

IN SHORT, ONE can make that thoughtful donation while also ensuring they will have tickets to ballgames for the 2010 season.

Not that such a thought is at all comforting to those people who seem to want to find religious offense in every part of our society these days. To believe some people, rooting for the Jackhammers now is the quickest way to ensure that one will get to spend all eternity under the control of Mr. Applegate.

Some people have been screeching that the billboard needs to come down, although team officials seem to enjoy the free publicity they are getting – saying it will remain in place through Wednesday.

It also would seem that those critics of God being a season ticket pitchman are in the minority – a totally unscientific survey on the ballclub’s website indicated as of Sunday that 93 percent of nearly 140,000 fans think the billboard should remain.

NOW I’M NOT claiming to be a religious scholar by any means. But I have a hard time envisioning people who could have so few problems in their lives that they would have time to worry about either of these two advertisements.

To me, there is a big difference between something offensive and something being trivial. If anything, I would agree that both of these advertisements fall into the latter category. But then again, we as a society have become a group that seems to think there is something significant about the ongoing affairs of golfer Tiger Woods – a saga I personally could care less about.

If anything offends me these days, it is not these advertisements. It is people who want to belive it matters to us what Woods was doing with all those women.

I say it only matters to Elin Nordegren, just as I still have a hard time getting offended by the decade-old behavior of then-President Bill Clinton. I still say that Hillary should have done to Bill what Elin did to Tiger – and that should have been the end of it.

EDITOR’S NOTES: I never realized that baseball (http://jackhammerbaseball.com/news/index.html?article_id=2096) or the Census (http://www.washingtonpost.com/wp-dyn/content/article/2009/12/15/AR2009121502928.html?hpid=moreheadlines) were issues of great theological concern.
Posted by Gregory Tejeda at 12:01 AM