Toni Preckwinkle, the Chicago alderman who’d like to run on what’s left of Barack Obama’s coattails for the presidency of Coo 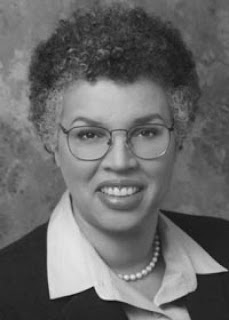 k County Board, is counting on getting a significant share of the women’s vote if her campaign is to succeed come Feb. 2.

SHE’S A PRODUCT of the same Hyde Park neighborhood that gave us Obama (he used to represent the area at the Statehouse in Springfield, compared to Preckwinkle making the trip downtown to City Hall).

But while the African-American vote, some polls indicate, seems to center around city Treasurer Dorothy Brown and incumbent President Todd Stroger (not everybody thinks he’s a goober), Preckwinkle is the one who ran in second place in a recent Chicago Tribune poll, behind Brown but ahead of Stroger and Metropolitan Water Reclamation District head Terry O’Brien (a.k.a., the white guy).

It was with that in mind that Preckwinkle made public on Monday a list of groups that endorsed her – including Planned Parenthood of Illinois (the first time that group has ever bothered to get involved in a county board campaign).

The group cites the fact that they long supported her as an alderman and that she was a backer of the Bubble Zone Ordinance – the measure that prevents anyone from getting within eight feet of a woman trying to enter a clinic where abortions are offered.

SHE ALSO GOT the support of Democratic organizations in Chicago’s 49th Ward (the far north side), along with Evanston, Northfield and New Trier townships (the far northern suburbs of Cook County), and with Citizen Action/Illiinois – a good government type group.

In short, it looks (http://www.tonipreckwinkle.org/page/22) like the same kind of white people who had no problem voting for Obama for president are the ones most inclined to prefer Preckwinkle for county board president.

Which makes me wonder if we ought to quit paying much attention to O’Brien, who was only being taken seriously on the mistaken grounds that white people would mass around his campaign.

Interesting that Planned Parenthood would endorse her. Has she watched the film: Maafa21: Black Genocide in 21st Century America? I suggest she does , before she accepts any funding from Planned Parenthood! Clip here: http://www.maafa21.com

Greg,
I am one of those white people who voted for Obama. But I am going to go with Terry O'Brien. Not because he is white but because of the job he has done which I think shows he has the ability to take his experience to the County Board Presidency. I like Toni but I am not sure she has the executive experience needed at this time. We need someone who has proved they can work with various factions on a board.

I am also a white, Obama voter who thinks Preckwinkle is a great alderman but lacks executive experience. Her liberal agenda sounds good in an ideal world, but is just unreasonable right now. The county needs O'Brien's fiscally responsible agenda to offset all the easy targets the GOP takes (tax-and-spend, patronage, etc.) If O'Brien doesn't win the GOP has an actual shot at taking this seat for the first time in history. O'Brien's msg is the only one with crossover appeal that can preserve the services that cook county has. And quite frankly after this Stroger administration just what the doctor ordered to restore sanity.