Have you seen this face? 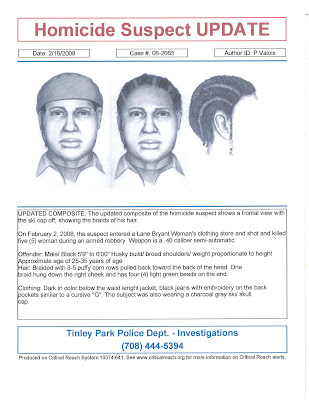 You’re not alone in saying “no.”

Police in the southwestern suburb of Tinley Park have received tidbits of information from more than 5,600 people, yet none of it is solid enough that police could go so far as to make an arrest in the slayings of five women at a Lane Bryant store that took place one year ago Monday.

THE “LANE BRYANT slayings” seem destined to go down in Chicago crime lore along with the Brown’s Chicken killings at a franchise in northwest suburban Palatine. People died in 1993, yet it took nearly a decade before people who knew definitively what happened were willing to come forth and cooperate with police.

One can only hope for the sake of the memory of Carrie Chiuso, Rhoda McFarland, Connie Woolfolk, Sarah Szafranski and Jennifer Bishop, someone can speak up a bit sooner than that.

In the meantime, officials in the suburb plan to mark Monday with a special service – to be held at Noon at the Tinley Park Convention Center, located on Harlem Avenue at Interstate 80. The Brookside Marketplace shopping center where the slayings took place is located on just the other side of the interstate highway.

EDITOR’S NOTE: Officials insist they need to move ahead, despite the inability of law enforcement (http://nwi.com/articles/2009/02/01/ap-state-il/d96318mo0.txt) to complete their work on a case that can be prosecuted in Will County court.
Posted by Gregory Tejeda at 12:00 AM