There are some people who believe that if Rod Blagojevich had made a legitimate choice to replace Barack Obama in the U.S. Senate, 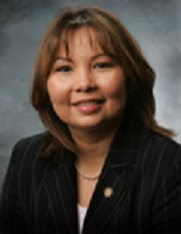 Tammy Duckworth would have been the one who was moving to be a part of the D.C. Scene.

He didn’t (although Roland Burris wasn't the worst pick he could have made). So she didn’t. But as it turns out, Duckworth will get her chance to be a part of the federal government in the Age of Obama. And she’s better off professionally, as a result.

DUCKWORTH IS THE veteran who lost use of her legs in combat during the Iraq War (a helicopter she was piloting was shot down), and came back with such an inspiring story of refusing to give up on life that politics appeared in her future. She gave Rep. Peter Roskam, R-Ill., a run for the money in the 2006 elections, and later got the director’s post for the Illinois Department of Veterans Affairs as a consolation prize.

She got that appointment from Blagojevich, which made him her political sponsor. That means she owed any political allegiance to him. If he had gone ahead and decided to make her a member of the U.S. Senate from Illinois, that would have strengthened her tie to Milorod.

Duckworth would have been Blagojevich’s girl for good, and her career in public service positions likely would have gone down the political toilet along with that of the former governor.

Instead, she is now a pick of Obama to be an assistant secretary for the federation Department of Veterans Affairs.

SO THERE IS a chance that her one-time ties to Blagojevich will wither away, and she will become a part of the Obama saga (for better or for worse).

Of course, it wasn’t purely Obama who decided to steal the Illinois head of veterans affairs for a top post within the federal VA. She had the backing of White House chief of staff Rahm Emanuel and senior adviser David Axelrod.

So the political cynics will cite Duckworth as yet another part of the “Chicago Mafia” that supposedly is taking over the U.S. government (Duckworth herself lives with her husband in suburban Hoffman Estates).

From my perspective, I can’t help but think that this move from the state to the federal Veterans Affairs Department will reinforce the image of Duckworth as an expert in the field of the military and how this country addresses the needs of those one-time soldiers, sailors and Marines once they return home.

IT MIGHT VERY well mean that she will never run successfully for elective office.

She won’t ever serve in the Senate, or the House of Representatives. She won’t be a future governor, or hold any statewide position in Illinois.

But I also get the sense that Duckworth herself is most interested in being a part of the solution for veterans and their needs. It is one she has a first-hand experience with, and it gives her a chance to make a worthwhile contribution to our society.

In fact, it might very well have turned out for the best that Duckworth did not win the Congressional election of ’06. It’s not that Roskam, an attorney and one-time state legislator from Wheaton, has been all that stellar a member of Congress for the past two years.

BUT IT HAS left Duckworth free to pursue other career paths – ones that most likely fall within her true talents and interests.

So it will be interesting to see how the nation responds to Duckworth, who remains a member of the Illinois National Guard (she holds the rank of major, along with her husband, Brian Bowlsbey).

Until Sunday, that is.

GOV. PAT QUINN showed that despite the fact he is now the titular head of the Illinois “establishment,” he still has streaks of his personality developed during his decades of being the chief gadfly of the Illinois political scene.

He named Duckworth’s replacement on Sunday – the day he used to use to announce his activist causes on the theory that it was the only day newsgathering organizations in Illinois would be desperate enough for news content to cover him.

Hence, we now have 28-year-old Dan Grant as head of the state agency that works with the federal agency to which Duckworth is moving up to in order to provide aid to the roughly 1.2 million military veterans who live in Illinois.

Grant graduated from the military academy at West Point and served in the army as a captain during the Iraq War, but that ultimately is not what got him the position.

HE IS A Chicago resident (but Michigan native) who worked for Quinn and showed his loyalty to the then-lieutenant governor, which means he put himself in line to be promoted to a top post when his political sponsor took over as governor.

As it turns out, Grant established his connection to Quinn during what turned out to be his biggest achievement during his six years as Illinois’ lieutenant governor – promoting military interests.

Quinn is the guy who made a point of showing up at funerals of military people from Illinois to show the state’s appreciation of their sacrifice in Iraq or Afghanistan. On occasion, he also visited VA hospitals to try to cheer up the wounded troops, and it was on one of those visits that Grant and Quinn met in 2007.