On the one hand, it was oddly relevant to look at the “front” page of the Chicago Tribune (I’m talking about the tabloid version that was purchased Friday at a drug store).

Half of the front cover was taken up by an advertisement – one for Darvin Furniture, which is having a sale on mattresses to get people to come in this weekend for President’s Day (and I don’t want to hear any bad jokes about Bill Clinton).

WE’RE NOT TALKING about those little one-line agate type “ads” that appear at the bottom of columns on Page One of the New York Times. We’re not even talking about the strips that take up the bottom inch or two of the front page of many newspapers these days, including the Chicago Sun-Times.

We’re talking about a full-fledged display advertisement telling us of “Super Values!” if we need to buy mattresses (which my mother does these days, that is what made it relevant).

The rest of that front cover literally seemed like an advertisement for the newspaper itself, showing us a miniature version of the “Front Page” and telling us that the “complete Tribune” was inside. 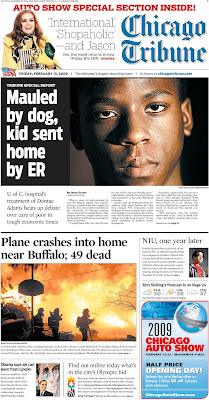 The impact of this "dog bites man, and nobody cares" story was muted in the tabloid version of the Chicago Tribune by mattress sale advertisements.

Now that is how Tribune newspaper types are going to justify this blatant bit of commercialism on the front of a publication that likes to believe it is one of the elite newspapers of the world (it isn’t, but that’s a different story).

TECHNICALLY, THE “FRONT” cover was NOT the “front page.” The first two and last two “pages” of what was a thick newspaper on Friday were actually a Darvin advertisement, with that little touch of the front cover informing us that an actual newspaper lay inside the ad.

It makes me feel like I read the Tribune shopper, rather than the publication put together by a newsgathering organization that used to bill itself as the “World’s Greatest Newspaper” and now brags that it has the “Largest Reporting Staff in the Midwest.”

I don’t care if what on the surface appears as Page Three is the real “Page One,” giving us the same graphic as appeared on the broadsheet paper about the teenager who was turned away from the University of Chicago hospitals even though he had been mauled by a dog.

TO THE PEOPLE who are making an impulse purchase of a paper, this is the publication whose BIG STORY on Friday was the “MATTRESS SALE” by Darvin. The kid and the dog, along with all the other news and features published in the paper, were just a sideline.

I guess that means the recent loss of a Pulitzer Prize-winning reporter and the closing of bureaus in Jerusalem and Rome earlier this week aren’t as important to the product as ensuring that people know where to get a good mattress – which means the “Hero of the Day” at Tribune Tower on Friday likely was the display advertising salesperson who snagged Darvin into buying such a prominent advertisement.

I guess I was always absurd in thinking that the purpose of selling advertisements in a newspaper is to raise the money needed to support the newsgathering operation, and that selling those advertising inserts that come with coupons is to further entice people to buy the paper so they can read all about the significant and interesting happenings of the world – as perceived from Chicago.

Now perhaps part of this is because the Chicago Tribune is, inherently, a broadsheet format newspaper (which is the version that all the subscribers still get).

THERE ARE PROBABLY people who think that the smaller page size gives them some license to do tackier things that they would never dream of doing on the full-sized (which themselves are smaller than they used to be) pages.

That Darvin ad spread out over a half-page of a broadsheet Tribune would be downright tacky – and we’d have the pundits and other pompous people pontificating about crass commercialism.

But it doesn’t have to be this way. 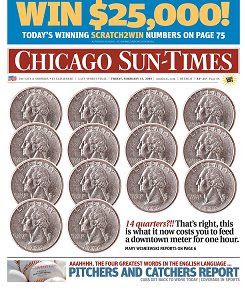 Take the Chicago Sun-Times, which on Friday was the publication that looked staid, serious and respectable by comparison.

THE SUN-TIMES GAVE us a newspaper with an advertising decal that peeled off – promoting the ongoing Chicago Auto Show ($5 off the regular admission price of $10 for adults).

That ad was unobtrusive, actually helps to provide a bit of information about a public event that has become a Chicago tradition, and ultimately was removable, thereby letting me see the graphics for the main story of the day – which was an attempt to dump on Chicago city officials for raising the fees for parking meters by showing us exactly how many quarters it would now take to “feed the meter.”

Now I know some people are going to want to dismiss this commentary as the rant of a crank. They’re going to say that newspapers need every bit of income they can get these days to support the ever-shrinking staffs to keep them from dwindling to even smaller numbers.

But there reaches a point when newspapers alter their product to the point where it becomes shallow. This kind of blatant commercialism in letting the ads take over to where they overwhelm the news product is close to that point. Why should I pay $0.75 for a “shopper” when I can pick one up for free in my neighborhood?

AS MY LITTLE act of protest, all I can say is that when my mother does go ahead and get herself a new mattress, I’m going to make sure she buys it from anywhere EXCEPT Darvin.

Besides, their prices don’t look all that “super.” I’ve seen a couple places advertise mattresses for less.

The content you have provided is pretty interesting and useful and I will surely take note of the point you have made in the blog.

While I was browsing the Internet for ways to boost my website exposure, I read about how effective offline media is for getting additional exposure. Since online media advertising has become so competitive, I thought I will complement the online marketing efforts of my products with offline media advertising like newspaper and magazine advertising. This can be the best way to get a wider coverage for a website and draw additional traffic. I think it is a great marketing strategy to use both online and offline advertising to get more customers.

I thought this information might be useful for anyone looking for solutions to get me-ore traffic to their website.