Mark the dates "July 30 through Aug. 2" on your calendar. 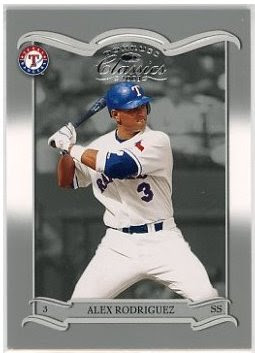 That four-day span over a weekend in the summer of 2009 will be memorable in Chicago for one reason – that’s when the New York Yankees make their lone trip to the Second City this season to play the White Sox.

IT WON’T MATTER just how bad the White Sox or the Yankees are playing (although personally, I think both will contend for something in their respective divisions). That weekend will be significant because it will be the time span when Chicagoans with nothing better to do with their lives than razz Alex Rodriguez will deem it worthy of their time to go to the ballpark.

Who can come up with the most “clever” (a.k.a., insipid) chant? Who will have the crudest sign implying that Rodriguez (arguably one of the best ballplayers ever, even though he’s far from being one of the best Yankees ever) is a drug abuser.

I can already see the spectacle, as certain people will feel like it is their mission in life to single out Rodriguez for even more abuse than they would have because he’s one of the top ballplayers – and because he’s a Yankee.

Now before anyone starts thinking that I’m about to go in defense of a steroid-using ballplayer (as Rodriguez now admits he was), I’m not. But I’m also not going to get all worked up over his activity, because I believe that there are physical consequences he will suffer from the use of certain drugs meant to build up strength.

IN SHORT, I think Rodriguez and all the other athletes who misuse such substances will pay a hefty price later in life (in the case of Ken Caminiti, he paid with his life at age 41). I think people who believe they need to add to the abuse of a ballplayer are just people with nothing going on in their own lives, so they have to mind someone else’s business.

Now as it has been reported in recent days, Rodriguez experimented with certain substances in an attempt to build up muscle mass so as to make him a stronger athlete who might be capable of doing better things on the ball field.

The test to which he came up “positive” was taken in 2003 when Major League Baseball was first trying to get a handle on just how much the use of certain steroids was impacting the game.

In theory, ballplayers were tested anonymously that year, and no one was supposed to know who was who when it came to who tested positive and who tested negative.

SOME MIGHT ARGUE that the real tragedy here is that Rodriguez’ anonymous cooperation with this test was unveiled. But I think of it more as the equivalent of someone who faces serious criminal charges, only to have them knocked down to a misdemeanor (if anything at all) because of prosecutorial misconduct.

Rodriguez can’t officially be punished for “passing” this particular test, even though ballplayers tested since then face a rigorous schedule of suspensions that can ultimately take away their careers (there’s no lifetime ban, but if you start losing entire seasons, it takes away from the interest ball clubs will have in all but the best athletes).

And as far as those people who want to start screaming about “asterisks” and erasing statistics and records set by ballplayers who used steroids, you can’t do that. Trying to erase history and rewrite it in a favorable way is un-American. It happened. Now baseball and its fans have to live with it.

Now I’m not naïve enough to think that steroids are limited to certain ballplayers, or even certain teams.

IT DOESN’T EVEN surprise me to know that professional athletes whose livelihood depends on being in top physical condition would mess with such substances that can – if misused – leave them weakened and susceptible to illness.

With all the supplements and other drugs that bodybuilders and other athletes take out of the belief that they’re doing their bodies some good, why wouldn’t it make sense that some are bound to think these steroids fall into the same class – or ought to, if not for some people who are just too uptight.

While I realize he now tries to back away from his past rhetoric, that was the basic attitude that one-time outfielder Jose Canseco expressed a few years ago when he helped write the book “Juiced.”

Canseco, known for being able to hit substantial numbers of home runs, claimed he thought all ballplayers ought to use steroids, along with weight training, so as to improve strength and the quality of the game.

THAT IS, IF you think the game ought to be nothing more than an exaggerated version of batting practice.

In fact, he may get hit with more abuse from his “hometown” fans in New York than anywhere else. After all, there are many Yankees fans who view Rodriguez’ personal achievements on the field as less important than the fact that the Yankees haven’t won an American League championship since the year BEFORE he joined the team.

WHAT I WONDER is how intense will the disgust level become? Will Rodriguez become the new Barry Bonds (whose home run achievements are despised by many baseball fans and whom many were hoping Rodriguez would someday knock out of the record books)?

Will Rodriguez intensify the notion among many baseball fans (one that I have always thought to be ridiculous) that the Yankees are a team that deserves to be despised?

I can remember as a kid sitting in the stands at the old Comiskey Park, listening to a crowd get all bent out of shape at the thought of trying to throw Reggie Jackson’s concentration off (it never seemed to work).

Is this what we’re destined to see in future years with Rodriguez?

IT MAKES ME wonder if the day will ever come that Rodriguez will regret leaving such baseball “backwaters” as Seattle and Arlington, Texas to play in a place like New York City. I believe there are some fans who would be more willing to forgive him (in due course) if he still played for the Mariners or the Rangers.

Because “big money” + “Yankees” = (in the minds of many fans) Baseball’s “Public Enemy Number One.”

EDITOR’S NOTES: The Texas Rangers baseball club of the early 2000s are developing (http://www.usatoday.com/sports/baseball/al/rangers/2009-02-09-rangers-players-juiced_N.htm) a reputation as a team with many ballplayers who experimented with steroid use.

Some commentators can get a tad irrational (http://www.freep.com/article/20090210/COL10/90210013/Alex+Rodriguez+should+go+to+jail) when it comes to steroid use by an athlete.

For some people, the most interesting thing Barack Obama had to say Monday night was to call (http://www.nydailynews.com/sports/baseball/yankees/2009/02/09/2009-02-09_president_obama_tags_out_arod.html) the Rodriguez steroid saga “depressing news.”
Posted by Gregory Tejeda at 12:01 AM