Perhaps it is just evidence of the differing ways urban vs. rural residents perceive certain things. But the new road markers erected by Cook County to designate which streets it mai 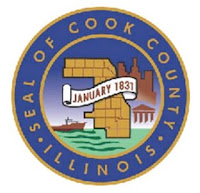 ntains strike me as something more befitting Tazewell County.

Not that I’m taking a dig at the central Illinois county whose major municipality is Pekin (not far from East Peoria, where President Barack Obama will visit the Caterpillar plant to tout the benefits of the potential stimulus package).

BUT THE SIGNS that I first noticed a couple of weeks ago (and which have certain people so worked up that they felt the need to call the Chicago Tribune to complain) seem like something that would fit perfectly in the downstate Illinois counties where there are strips of road that are not a part of any such municipality.

After all, in many of these rural-minded places, not every patch of asphalt upon which cars drive has some proper name. Not every place feels the need to dredge up the memory of even the most forgotten of its past political people by designating a street for them.

There are places in Illinois (even in the outer fringes of the Chicago area) where roads go merely by a set of numbers that only make sense if you look at the respective county as a whole.

So when I happened to be running an errand recently for my mother that took me to the part of the Chicago area where Tinley Park becomes Frankfort (and Cook County morphs into Will County), I first saw the blue with gold trim signs that tell you the road’s number and give you an indication of what direction (north/south or east/west) that road travels in.

I LITERALLY THOUGHT I had somehow lost track of where I was and had stumbled into Will County when I saw I was at W3207 and B6424, until I took a second look at saw that the signs were labeled “Cook County.” I was at 80th Avenue, near 183rd Street.

Now as reported by the Tribune, the signs have some people upset – largely because they don’t get the number/letter combinations that are the official labels for their local streets, rather than the (often) politically inspired names that many people commonly use.

That’s the official label by which county officials refer to Crawford Avenue (which those people who live in Chicago proper think of as Pulaski Road).

But these aren’t letter/number combinations that have ever been in common use by the general public. So they have some people freaked out, although I would guess that motorists who are used to driving on rural roads would see the signs, give them a quick glance, then promptly forget it.

The sight just wouldn’t be that unusual to them.

As county officials explain it, the Highway Department is erecting the signs to make people more aware of just which streets they maintain.

THEY SAY THAT in the event of an auto accident or other incident where someone is stranded, having the county road marker will make it easier for people to tell police or other authorities just where they are, since with the advent of so many street names (and some streets having multiple names), the street number designation might become the one county-wide constant.

In theory, that idea makes sense. Street numbers are easier to remember in an emergency rather than names. It's part of the reason I always thought there was a certain sense to the South Side's street labeling system, as opposed to having to memorize so many obscure names for the North Side.

But in daily use, it’s just so rural that people get irrationally worked up over it. It would require a significant mind shift to get people to quit trying to use the street names in their neighborhood that they have come to know as second nature.

There’s also the possibility that people in the Chicago area don’t particularly care who maintains which road.

FOR THE MAJOR streets in the metropolitan area are maintained by the Illinois Department of Transportation, while some are supported by federal authorities.

Those local side streets (the ones that are always the last to get plowed clear of snow during the winter storms) are maintained by Chicago or the relevant suburban municipality.

The county gets the more significant roads that aren’t quite significant enough to be included in the state portion of Chicago-area streets.

Yet this is all bureaucratic bunk to many Chicago-area people, who just want to think of their local road as a road, and don’t want to have to realize that it is very possible to have within a four-block radius of their home streets maintained by all four (city, county, state and federal) government entities.

I HAVE OFTEN seen people who show up at local government meetings to complain about potholes in the streets near their property, only to become frustrated at learning they’re complaining to the wrong entity. It helps enhance the conspiracy mentality that some people have of government engaging in some sort of double-talk. I’m sure some people view these new street signs with their “never heard of it” letter/number combinations for their streets.

Excuse me if I think this is a silly issue for people to get worked up over. But it appears some have, and they’re even managing to persuade the Cook County Board to rethink the 1,300 signs erected at a cost of $120,000.

This is one of those “issues” that will go away, once people become used to the signs on the landscape. They may even help some police agency more easily find an accident by avoiding confusion over some obscure politician’s name and where his street is located.

At the very least, why waste even more money by feeling the need to remove these signs – which already are paid for? Do we really need them gathering dust in some county warehouse?

EDITOR’S NOTES: Were the new road markers erected around Cook County some sort of (http://www.chicagotribune.com/news/local/transportation/chi-cook-route-signs-12-feb12,0,6103114.story) plot to slip some wasteful spending into the county budget?

Cook County’s highway department has jurisdiction over 1,474 miles of lane pavement (http://www.co.cook.il.us/portal/server.pt?open=514&objID=294&parentname=CommunityPage&parentid=3&mode=2&in_hi_userid=2&cached=true) throughout the county, and these maps can help decipher which streets are which road numbers.
Posted by Gregory Tejeda at 12:01 AM