Listening to Louisiana Gov. Bobby Jindal respond to President Barack Obama’s Tuesday night address was uneventful, as far as I was concerned.

Jindal, a Republican, hit all the GOP talking points when it comes to trying to portray Democrats as out of touch with their vision of what our society ought to be like. And considering that his “official Republican response” came less than a half-hour after Obama finished talking, why should we expect it to be different.

HEARING THE OPPOSITION party provide a response to a presidential address of any kind always struck me as phony. The idea that this person mentally digested everything the president had to say, then came up with a coherent speech in such a short amount of time is ridiculous.

Of course, it’s going to be largely rehearsed, and probably written in advance of the president’s actual comments. At most, there might be a last-minute touchup of language to mildly reflect whatever it was that came from the president’s mouth.

All that is the reason why I found it ridiculous on Wednesday to learn that the political pundits and other observers are trashing Jindal’s response – not so much because they thought anything Obama said was all that profound. 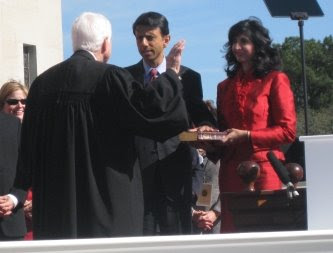 Bobby Jindal takes the oath of office as Louisiana governor, and some people like to dream that he will take a similar oath in Washington in January of 2013. Photograph provided by State of Louisiana.

But they are saying he stuck too close to the GOP ideological line in issuing a politically partisan criticism of the president.

SERIOUSLY, WHAT ELSE was he supposed to do?

To me, the significance of what Jindal had to say was to confirm that the Age of Obama has not taken over the mindset of the nation. There are people who are going to view the Obama Administration as the problem, and will spend their next four (or perhaps eight) years trying to figure out how to stymie it – if not take it down altogether.

That is the reality of partisan politics. And there is a degree to which this is a good thing. The last thing anyone should ever want is a government controlled entirely by one political party or ideological thought process.

There ought to be a strong opposition party in political matters.

THINGS WERE BAD during the two-year span (1995 and 1996) when Republicans ran all of Illinois government, and the fact that the party has so quickly become irrelevant in Illinois is truly pathetic.

Think of how much better off Illinois would be these days if the GOP had some influence. Perhaps former Gov. Rod Blagojevich would have been more compelled to try to work with his Democratic “colleagues” if there was a Republican opposition.

Instead, he took the approach that the Democrats were supposed to follow his ways. When they didn’t, it was their fault for not being properly appreciative of him.

But back to the national scene, where Jindal is being trashed for what some people would say was his “job” on Tuesday night – merely reminding us that Republicans will be an opposition, rather than puppets to go along with his bidding.

HE REMINDED US that the Republicans are not going to go along on the stimulus, and semi-secretly are hoping for something that can be construed as failure – so they can then go around telling us, “we told you so.”

It is because of moments like this that I think Obama’s call for bipartisanship throughout his campaign and in the early weeks of his presidency is a bit naïve.

Sure, it’s nice not to play partisan games with public policy. But it’s not realistic to think that other people are going to feel the same way about Obama.

It even struck me as silly that some people criticized Jindal for his verbal delivery. Some say his voice was “flat.”

ACTUALLY, IT WAS his voice that most caught my attention during his presidential response. Jindal may have an Indian ethnic background, but it became very clear that this is a person who spent the bulk of his life in the rural south.

He had the same drawl as any other political person from Dixie. And I’m sure that is one reason why there are some people in this country who are more comfortable with a Jindal than an Obama (who comes across to some people in this country as way too citified – which is also the reason why others in the country like him as much as they do) when it comes to the type of ethnic minority they are comfortable having as a political leader.

I’m sure some people see a Jindal as trying to talk and sound like “an American” whereas they think Obama has a ways to go.

What I got from listening to Bobby Jindal speak was a reminder that this nation still has its basic ideological split (the blue vs. the red, north vs. south, urban vs. rural, or however else you choose to characterize it).

SOMETIMES, I THINK Obama’s most hardcore supporters are so blinded by their ideological love for the Chicago politico-turned-president that they assume everybody else feels the way they do.

In that sense, Jindal was a jolt of reality that for some people was long overdue.

Nobody should have expected an “Obama-like” moment from Jindal’s televised address (http://www.bloomberg.com/apps/news?pid=20601087&sid=aKyeCP.LGe5s&refer=home) that followed the president.
Posted by Gregory Tejeda at 12:01 AM

This is where Bobby Jindal got his talking point from:

You make a great point. I had no issue with Jindal's speech. I would have thought someone set the bar way too high. I say this because there were some Republicans who were upset about his speech.