There are some political observers who will be amazed that a member of the Democratic congressional delegation from Chicago did not vote in support of the stimulus package touted by our hometown president, Barack Obama.

But I would have been surprised if Rep. Dan Lipinski, D-Ill., had not thrown up some sort of stink, or protest, or other comment of concern. For Lipinski truly takes after his father, former Chicago alderman and Rep. Bill Lipinski, D-Ill., when it comes to going along with the Democratic caucus on partisan issues.

THEY’RE BOTH THE kind of Democrats inclined to think it sad that the “liberals” have taken over the party. But both have too much sympathy to organized labor and people who have to do physical labor to earn a living to ever seriously entertain the notion of becoming a Republican.

Lipinski the elder was a Southwest Side guy, while his son has taken to living in the surrounding (Western Springs, to be exact) suburbs – even though he takes after his father politically. Somewhat conservative on social issues, he’s willing to fight for federal funding for mass transit programs.

Bill Lipinski considered mass transit to be his pet issue, and Dan Lipinski made it clear with his stimulus vote that he thinks of himself the same as his father did. 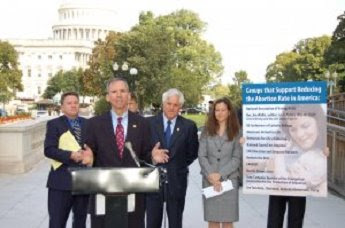 Anybody who has ever heard Dan Lipinski speak about abortion would realize he is capable of voting differently than his Democratic Party colleagues in the House of Representatives. Photograph provided by Rep. Dan Lipinski, D-Ill.

For the record, Lipinski the younger did not vote for the stimulus package. But he did not go along with Republicans in Congress who largely voted “no” on the matter.

He was the lone “present” vote when the issue came up for its final bit of Congressional action. The measure now merely needs Obama’s signature of approval to take effect, and he is expected to do that on Tuesday.

For his part, Lipinski told Crain's Chicago Business he does not oppose the idea of a stimulus package. He’s not playing the ideological game that many Republican legislators are – refusing to participate, then hoping that the measure fails to accomplish much of anything so they can later tell the public, “I told you so.”

He’s upset with the last-minute cuts that were made to the package, of which he thinks too much was taken out of mass transit funding. Most of those projects were for repairs to existing bus and train lines, and to a few expansions that could have improved service.

THAT ULTIMATELY IS a key to mass transit – the more one cuts the service available, the less people will want to use it because it just doesn’t take them to the places they want/need to go to.

Mass transit programs are truly the perfect example of something where one needs to spend money in order to make money.

Lipinski was the guy who tried to get an additional $3 billion for mass transit programs added to the package (that’s for the entire country, not just for Chicago and the CTA). But all of the money he tried to add was ultimately whacked from the plan when Senate and House of Representatives negotiators reached the compromise plan that ultimately was approved by both legislative chambers.

In the end, the stimulus is expected to add roughly $8.4 billion for mass transit programs across the nation, along with the funding for highway and bridge repairs (for those areas that consider buses and subways to be unseemly), and other projects that are intended to create work and give the nation’s economy a jolt from its current recessionary status.

OF COURSE, ONE should keep in mind that the $789 billion spending plan finally agreed upon (earlier versions could have run as high as $835 billion) WILL provide additional federal funding for mass transit.

About $450 million of the total $8.4 billion will wind up coming to the Chicago area, with the Regional Transportation Authority getting that funding to split up amongst the Chicago Transit Authority, and in lesser amounts, to the Metra suburban commuter railroad and the Pace suburban bus system.

So what should we think of Lipinski’s “present” vote?

It is fitting of his political character that he’s not going to be the most reliable supporter of the president’s desires when it comes to the Democratic caucuses in Congress. Anybody who questions that statement should look at Lipinski’s voting record whenever the issue of abortion comes up. 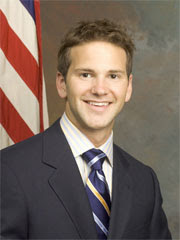 BUT THIS WASN’T some ideological snit fit such as what the Republicans were playing, such as the “no” vote cast by freshman Rep. Aaron Schock, R-Ill. The kid Congressman from Peoria (he’s only 27) was the beneficiary of much Obama attention in recent days to try to get a few GOP supporters.

Schock stood in lock/step with the Republican caucus in refusing to consider a measure to give the economy a desperately needed jolt.

This was more about trying to get a little more to help upgrade our city’s (some estimate Lipinski’s preferred funding level nationally would have translated into an additional $200 million for Chicago) mass transit. It could have helped.

EDITOR’S NOTES: Most of the political people who opposed the stimulus package had a problem how much spending was included in the plan. But Dan Lipinski had a problem with not enough (http://www.chicagobusiness.com/cgi-bin/news.pl?id=33017) being included for his top issue of concern.

After spending a weekend of relaxation in the Hyde Park neighborhood, Barack Obama plans to sign the (http://www.nytimes.com/2009/02/16/us/politics/16talkshows.html?hp) stimulus package into law during an appearance in Denver – the city where he officially got the Democratic nomination for president.

Lipinski is not alone in thinking that mass transit programs were not among the favored (http://www.washingtonpost.com/wp-dyn/content/story/2009/02/14/ST2009021401730.html) programs when it comes to funding from the stimulus package.

Obama tried to appeal to Aaron Schock on grounds that the two Washington-based politicos (http://blogs.suntimes.com/sweet/2009/02/despite_obama_wooing_illinois.html) were veterans of the Illinois Statehouse Scene. It didn’t work.
Posted by Gregory Tejeda at 12:01 AM

I understand Lipinski's sentiments regarding the stimulus bill. Though, I don't think it's Obama he's not backing...it's the final version of the stimulus.