It’s no secret that the Chicago population is a mish-mash of ethnicities. Throughout its history, newcomers to the United States have seen the Second City and its surrounding area as a perfect place to begin their lives in a new country.

In fact, I’d argue that Chicago can serve as the immigration issue’s version of a Rorschach test. Let people take a quick look at the Second City, and we can figure out where they stand on the issue.

THE PEOPLE WHO are misguided enough to think our wonderful city on the shores of Lake Michigan has a problem are probably the ones who are most clamoring for a tightening of the immigration laws in this country so as to remove people from within our boundaries.

But many of the people who have made their lives here are the ones who realize the benefits of a continuous influx of newcomers – it helps keep the region (and ultimately the nation) from becoming stale economically and socially.

The fact that even the long-running families of Chicago can trace their lineage back a few generations to immigrants makes them realize these new newcomers are going to make the same adjustments and become a part of our establishment with the passage of time. 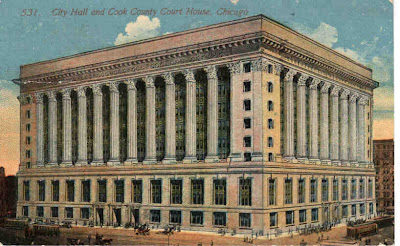 City Hall will be the focus next week of problems immigrants face in dealing with law enforcement. The only difference between today's immigrants and the ones who made up Chicago's population back when this century-old postcard was contemporary is that now they speak Spanish or Arabic, rather than Polish or with an Irish brogue.

That is why Chicago has followed the example of certain other places, such as New York, in declaring itself a “Sanctuary City,” a refuge of sorts for immigrants, regardless of whether or not they have a valid visa or all the proper papers.

NOT THAT BEING an “illegal alien” (to use federal government technospeak) is legal in Chicago. It only means that Chicago police and other city officials, should they stumble across information indicating that a person might not have the proper papers, do not make an effort to point them out to federal immigration officials.

City officials act as though the federal government should enforce its own laws, and not expect Chicago government to do it for them. That is a 180-degree difference from the views of people such as Maricopa County (Ariz.) Sheriff Joe Arpaio, who in recent months has led raids searching for people without papers in the Phoenix area that have resulted in many legal residents being harassed because of their ethnic background.

The legal theory behind a “Sanctuary City” policy is that local officials do not fully appreciate all the nuances of immigration law, and should not be making any efforts to enforce federal acts out of fear they may erroneously penalize someone who has legitimate business being in this country.

Such policy is why the City Council is taking it upon itself to conduct its own investigation into whether or not immigrants are being penalized within Chicago’s boundaries.

NOW THE CITY Council, as a local government body, does not have authority to start penalizing the federal government. The special committee hearings to be held next week at City Hall are more of a symbolic gesture – government officials in Chicago want to show they are supportive of the newcomers to the city.

So council members, led by Ald. Danny Solis (brother of Democratic vice presidential candidate chief of staff Patti Solis Doyle), will be taking the time to let dozens of immigrants tell their stories.

They are going to focus on cases where inmates at Cook County Jail were turned over to federal immigration officials once their local cases were disposed of.

In theory, the county sheriff does inform immigration of the inmate’s existence, but there have been some accounts of people without papers at the jail who were held indefinitely at county expense before federal officials could take custody of them – despite rules that require a 48-hour time limit on such additional detention of would-be undocumented immigrants.

THEY ALSO ARE going to study claims of some immigrants who claim Chicago police officers questioned them about their immigration status during traffic stops, and have contacted federal officials in cases where they suspected someone did not have the proper documents to be in the United States.

Chicago police officials have denied such activity – which would be in violation of the ordinance that made the Second City a “Sanctuary City” – ever took place on their part.

But political people will use the hearings as a chance to bloviate on the immigration issue, largely in hopes of showing people they are sympathetic to the concerns of people who have just arrived in this country and are still trying to adapt to the “alien ways” of U.S. culture.

Of course, immigration rights supporters are not the only ones capable of spewing pompous rhetoric when it comes to the issue. The people who think the answer to the problem is building walls along the U.S./Mexico border and engaging in mass deportations also like to hear themselves talk.

TAKE THE CASE of Rep. Peter Roskam, R-Ill., the lawmaker from suburban DuPage County who sees Chicago’s attraction to newcomers as a problem.

After a recent trip to the Arizona/Sonora border region, Roskam told the Daily Herald newspaper that Illinois is to blame for “illegal aliens” for creating an environment in which newcomers feel welcome.

specifically trashes state government for refusing to allow use of the E-Verify computer program that theoretically allows employers to check if someone is a legitimate resident legally capable of working a job in the United States.

“It creates in them the expectation that if you make it to Illinois, you are home free,” Roskam told the Arlington Heights-based newspaper.

HE IGNORES THE flaws that exist with the E-verify system (which is based off a check of Social Security numbers) that have resulted in legal residents losing jobs, because he’s more interested in making the statement about immigration.

Ultimately, that system’s future is pending in the federal courts, where the Department of Homeland Security (of which immigration is a division) has filed a lawsuit in hopes of getting a court order that would force employers to use the system – flaws and all.

Roskam’s rhetoric is not limited to E-verify. He also proudly cites measures he supports to limit a non-citizen’s ability to get a valid driver’s license or obtain medical care. He even goes so far as to tout measures that would deny U.S. citizenship to people born in this country if their parents were not citizens.

Considering that citizenship is the ultimate accident of birth, the idea of trying to deny that accident is absurd. But absurd rhetoric is comprehendable when one considers that Democrats are putting some funds into trying to knock Roskam out of his congressional post.

HIS OPPONENT IN the Nov. 4 election is a retired Army Reserve colonel who also served as an advisor on public safety and national security issues to Gov. Rod Blagojevich and who supports more sympathetic policies that would allow some of the undocumented immigrants a way to legally remain in the country – despite the goofs who automatically want to label such acts as “amnesty.”

Roskam needs the partisan rhetoric if he’s to appeal to enough social conservatives among the DuPage County electorate to send him back to Washington for another term in Congress.

EDITOR’S NOTES: Rep. Peter Roskam of Wheaton took a trip to Nogales, Ariz., to see the border (http://www.dailyherald.com/story/?id=224030&src=1), and all he brought us back was a load of politically partisan rhetoric on the immigration issue.

Equally partisan rhetoric will come from the Chicago City Council next week when they “investigate” (http://www.chicagotribune.com/news/chi-ap-il-immigrantrights-h,0,177310.story) abuse of immigrant rights by local law enforcement officials.