Night baseball – How much is too much of Cubs for Lake View neighborhood?

It has been 20 years to the day that the Chicago Cubs played their first official night game at Wrigley Field, yet there is a part of the Lake View neighborhood psyche that is still stuck having to argue against the merits of baseball under moonlight.

Officials with Chicago’s National League ball club are preparing for yet another fight with the City Council over whether the strict city codes regulating night games ought to be loosened.

WHILE I CAN understand why the Cubs would want to have changes in the laws that limit the number of night games they can play each season, this is a case where I hope our city officials (particularly those who represent Lake View and the blocks around the ballpark that have informally come to be known as Wrigleyville) take a hard line and don’t change a thing.

The simple fact is that the concerns of neighborhood residents have to come before those of the ball club, and part of what gives Wrigley Field its “charm” (which has always been lost on me) is that it is such an integral part of its surrounding neighborhood.

Anything that hurts the neighborhood’s character will trickle down and hurt the ballpark atmosphere. It would be shortsighted to automatically give in to the Cubs just because they would like to be more like every other major league baseball club. 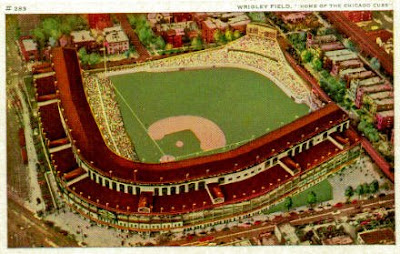 This postcard from the mid-1940s shows how integrated Wrigley Field was (and remains to this day) to its surrouding residential neighborhood of Lake View.

BUT THE PART of the ordinance that the Cubs are most interested in having changed is the provision that forbids any of those night games from being played Friday or Saturday nights.

City officials argue the youthful population that dominates Lake View comes alive on those nights. Between area residents and the young people who live elsewhere but want to pretend they’re “hip” enough to live on the lakefront, the area’s taverns and nightclubs already are crammed to capacity.

The last thing local political people want is more of an influx of people on those nights, with roughly 40,000 more people trying to be a part of the atmosphere of attending a ballgame – then sticking around afterward to pack the bars even fuller.

Alderman Tom Tunney told the Chicago Sun-Times this week that while he understands the Cubs would benefit because more people can attend games played in the evening, he sees it as too much of a “burden” for his home neighborhood.

NOW I CAN already hear the arguments of Chicago Cubs fans (an irrational breed if ever one existed) who will claim that people who live in the neighborhood mostly moved there knowing that a stadium used by a professional sports team existed nearby. They should have taken the notion that Lake View is not some isolated place like the Sauganash or Hegewisch neighborhoods before they moved there.

And I will concede that while I have never lived in Lake View, I have known people who did, and many of them chose to live there for a time because they liked the idea of being able to walk to and from a Cubs game.

But that is all irrelevant, and it is wrong for the Cubs to overlook the needs of the Lake View neighborhood when studying their own situation.

One of the reasons the Cubs draw a national audience (unlike the White Sox, whose appeal ends once one leaves Cook County and northwestern Indiana) is because they play their games in a building that is different from any other stadium in use today. If not for the building, the Cubs would have little more charm than the old St. Louis Browns.

WRIGLEY FIELD’S CHARACTER is that it sits in a residential neighborhood that is well-kept and clean. Lake View has changed throughout the decades from a German ethnic neighborhood to a flirtation with becoming a Puerto Rican enclave (most of them were priced out and moved further west to the Humboldt Park neighborhood) to its current status as the neighborhood of choice for young, educated professional people.

Part of the reason they choose to live so close to a sports stadium is because the local laws make an effort to control the potential negative effects that such a building can have (although I have heard the complaints from local residents about Cubs fans who think alleys behind their homes double as public toilets).

If those people ever moved out and Lake View took a plunge or two down the economic status scale, it would lose its appeal to the Cubs, would no longer be a desirable place to have a ballpark.

Let’s be honest, if Lake View had not in the late 1970s undergone gentrification and the Latino community had been allowed to develop there, it is most likely that the Cubs would have abandoned Wrigley Field decades ago, and people would regard it similar to how they think of Comiskey Park – a decayed building that outlived its usefulness.

THE CUBS NEED the professional crowd that dominates the neighborhood in order to keep up the illusion that Wrigley Field is a desirable address.

And if the Cubs think that the restrictions of staging their events (which is what the ball games there have become) at Wrigley Field are not worth the hassle, then perhaps it is time for them to start looking seriously at other locations – one where they could build the kind of massive structure that could accommodate their needs distant enough from area residents that excess noise would not be created.

That is why on the South Side, U.S. Cellular Field is surrounded by a block in all directions worth of parking lots, and by a railroad viaduct to the west that separates it from the Bridgeport neighborhood. It provides something of a muffler for the residents of Bridgeport and Armour Square to make life near a stadium somewhat more bearable.

Now I know the Cubs (and many of their fans) don’t want that.

THEY LIKE THE idea of playing games in a building that is a holdover to a past era when stadiums were built on whatever plots of land could be purchased at an affordable price, and the stadium quirks were dictated by the size and shape of the plot.

If that means the Cubs have to play fewer night games than other major league teams because there are people who literally live across Waveland and Sheffield avenues from the ballpark who would be inconvenienced by a batch of drunken idiot Cubs fans at 10:30 p.m. Saturday, then so be it.

After all, the Cubs like to claim the backdrop of all those apartment buildings just beyond the outfield walls and bleachers is what makes the ballpark so beautiful and unique. If they really believe that, then they need to show respect for Lake View and not talk about wanting to dump where they eat.

EDITOR’S NOTES: The Cubs already are able to play Sunday night games at Wrigley Field (http://www.suntimes.com/sports/baseball/cubs/1090220,CST-NWS-wrig05web.article) because of the demands of ESPN, which likes to stage a “Sunday Night Baseball” game and often likes the Cubs to be the team that plays in it.

The first official night game by the Cubs at Wrigley Field took place when they beat (http://mlb.mlb.com/content/printer_friendly/mlb/y2008/m08/d06/c3267159.jsp) the New York Mets 6-4, one night after what was supposed to be the first night game was rained out.

The circus-like atmosphere of baseball games staged at Wrigley Field dates back to the coming of lights (http://www.dailyherald.com/story/print/?id=226133), ending the era in which the Cubs took pride in being the only team that didn’t play after dark.

I can understand the buffer but the area the Sox plays now is getting better, perhaps 35th street could use a little of the action that one could find up there in Wrigleyville.