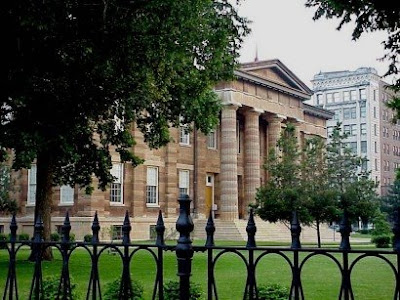 Barack Obama hopes to return to the Old State Capitol in Springfield, Ill., for a Saturday campaign rally. Photograph provided by state of Illinois.

I have heard some people of the Illinois Democratic Party persuasion claim that if Abraham Lincoln were alive today, he’d be a Democrat.

I don’t know if I believe that. But I’m starting to wonder if Barack Obama does.

OBAMA IS GETTING his schedule ready for a series of public events during the upcoming week that are meant to lead him directly to the Democratic National Convention in Denver.

One of those events is a rally outside the Old State Capitol in Springfield, which is the building that Lincoln knew as the Illinois Statehouse (the current building dates back to 1877).

Some people want to believe that Obama is going to use the site where he began actively campaigning for president to announce his choice for a vice presidential running mate. I’m not sure I believe that, but it wouldn’t surprise me if Illinois got its first look at the Obama/__________ ticket in Springfield on Saturday.

What makes it strange is that Springfield likes to think of itself as the quintessential Republican city. Since it can literally claim that Lincoln walked/slept/worked/ate here, it finds political people of the Democratic persuasion to be a strange breed.

YET NOW IT is a Democrat (and one from Chicago, at that) who is giving the Illinois capital city its moments of national glory.

And Saturday will likely be the last chance anybody in this state will have to actually see Obama prior to his late August trip to Denver – after which the campaign season kicks into high gear (as if it hasn’t been intense enough already).

For what it’s worth about Lincoln, I can’t help but think he would be disgusted with the “state’s rights” attitude that has taken over the Republican Party in recent years. But I’m not convinced he’d have looked to the Democrats as an alternative.

Lincoln in his lifetime was the man who gave up on the Whig Party to have a hand in creating the GOP. Who’s to say that if he were alive today, he wouldn’t have felt the need to create a third political party to take on the existing party hacks.

AND MAYBE, JUST maybe, that would have made him feel comfortable with Obama’s talk during this campaign season of government reform.

Although I’m sure he would have been the first to crack down on Barack if his actions fell short of his words.

On the topic of Lincoln and the Whigs, you may be interested to learn that the Whig Party currently has a modest 10,000 members (6,500 are affiliated with the military). The "Modern Whig Party" is a legitimate, mainstream and non-fringe organization that caters to those who find themselves cherry-picking between traditionally GOP ideals and traditionally Democratic ideals.

The Modern Whig Party is based out of Washington, DC and so far has 12 state affiliates as well as some college chapters.

Springfield has a Democratic mayor, and for the first time in many years Sangamon County had more Democratic Primary voters than Republican, thanks to Obama.

I think Lincoln would have appreciated Obama's focus on consensus building and bringing people together. Republicans certainly haven't been the party of civil rights for at least 40 years.

I'm hoping that President Obama will come to Springfield to speak on Lincoln's 200th Birthday in February.