What was the deal about Wednesday?

Was today really some crucial deadline that had to be met if the General Assembly was to be able to do something to spare taxpayers the expense of pay increases for people on the Illinois government payroll?

WAS IT ALL a moot point because, as Illinois Comptroller Dan Hynes says, there’s no appropriation of money in the budget that would allow him to approve checks for higher salaries?

Or is it more likely that all the rhetoric being spewed by political people in Chicago and Springfield was nothing more than a chance to try to score points against their opponents?

The way things stand, pay raises for various state employees (including the members of the Illinois General Assembly) were rejected, as the Illinois Senate gave in to political pressure on Tuesday. Although state Senate President Emil Jones, D-Chicago, had long said he thought the salary increases were justified, he ultimately allowed a measure to reject pay hikes to proceed, and it got a 47-0 vote. State officials have not received a pay raise since 1999, although they have received cost of living adjustments every other year, including a 3.8 percent boost this year. 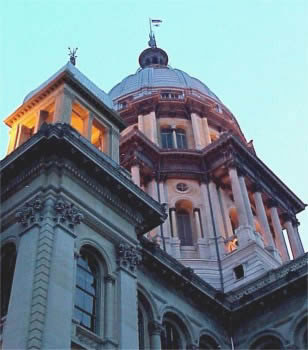 All activity related to state government this week is supposed to take place at the Illinois State Fairgrounds, not the capitol building itself. Lt. Gov. Patrick Quinn (below) is keeping himself busy with pay raise-related activity. Photographs provided by state of Illinois.

Now the way political people portrayed this issue, it was a matter of the Legislature giving itself a pay hike. In reality, it was the Legislature having to approve a pay increase for state officials, constitutional officers and judges, in addition to themselves. It was because the concept of salary increases for people on the Illinois government payroll being an “all or nothing” concept that I was never offended by the idea of pay hikes.

THE ILLINOIS HOUSE of Representatives did vote a few months ago to reject pay increases. But the state Senate held out on taking action until Tuesday because they considered it ridiculous to refuse to give state workers a pay hike – just because some people objected to the fact that the legislators themselves would also receive it.

That is the key to understanding the process by which Illinois government decides how much to pay its top staffers. A commission that is supposed to be apolitical and judge the jobs purely on the merits of the work being done and the cost of living decides how much of a pay increase is warranted every two years.

When that commission releases its study, its recommendation takes effect – unless the General Assembly approves a very specific resolution overturning the recommendation.

And it can’t just overturn the idea of a pay hike for some people, while allowing others who warrant a raise to get it. Just imagine the chaos that would be caused if the General Assembly were allowed to play political favorites – giving some people a raise and not others.

IN TODAY’S POLITICAL climate, I could imagine the goofs who would want to score political points by docking the salary of Gov. Rod Blagojevich while allowing others to get the governor’s money.

That is why it must be an “all or none” issue. The people who don’t want the legislators to get more money also have to harm the pay hikes of Illinois constitutional officers, various state agency officials and judges (whose salaries are included in this report too).

Now some people are saying that at a time when the cost of living (gas, food, housing, etc.) are increasing for Illinois residents, it is wrong to raise pay. But in reality, it is those very increases in the cost of living that caused the commission to recommend the pay hikes.

These state employees who do legitimate work on behalf of the people of Illinois also have to support themselves financially. They have to eat, pay the mortgage or rent, fill up the gas tank to get themselves to work.

DOES ONE REALLY believe they should be penalized because they work for the same general employer as the 177 goofs who were duly elected by the voters of Illinois to serve in the state Legislature?

Now for those who object to the Legislature’s tactics (the Illinois House approving a rejection of pay hikes while the state Senate did nothing), it must be acknowledged that they could have done worse – they are being honest in ways that some past legislators were not.

Jones may sound like he is mocking his political critics. But at least he’s coming right out and stating he’s not going to play politics with the issue, just to satisfy some people who will find an ideological reason to oppose him – regardless of what he does to try to appease them.

There have been some years in the past when both the Illinois House and state Senate would manage to approve a resolution of sorts that could be interpreted as a stance against pay hikes.

BUT WHAT WOULD happen is that each legislative chamber would come up with their own resolution, pass it and send it on to the other legislative body for concurrence – which would never occur.

The end result was that every single legislator who felt the need to say he or she voted for a measure against pay increases could do so. But since one single resolution never got approval from both the House and Senate, the raises would take effect anyway and political people would say it was “the other guy’s fault.”

That didn’t happen this year. Instead, we’re going to get the political rhetoric from various factions that comprise the Statehouse Scene.

I couldn’t help but notice Lt. Gov. Pat Quinn going so far as to hold a press conference in Chicago on Sunday and picket a gubernatorial appearance on Monday, claiming that pay hikes were bad and that the legislators didn’t deserve them.

HE EVEN WENT so far as to say he would donate the additional money from his pay increase to some charitable cause, which is a cute gesture. Of course, what he really wants is to draw attention to his new web site (http://www.nopayraise.org/), which is set up to allow people to automatically send hostile e-mails to either Jones or Blagojevich in protest of the pay raises.

That may sound like a lot of money. But there are officials elsewhere who get more.

NOW AS SOMEONE who personally has never taken in a salary of more than $35,000 annually, that might sound like some great sum of money. It might even be distorted into some great outrage that a mental mediocrity like Blagojevich could get such a salary.

But ultimately, all of this rhetoric about pay increases being wicked is dishonest. It comes from people who want to nitpick at the current political leaders in Springfield because they’re envious of their control. That nitpicking is an alternative to focusing their attention on trying to defeat them come the elections of 2010.

In short, talk about pay raises being “bad” is just partisan political rhetoric that should not be taken seriously. It would have been best had the state Senate had some backbone and ignored it.

EDITOR’S NOTES: Some people are willing to kill pay hikes for legitimate state employees (http://www.suntimes.com/news/commentary/1101871,edit081108.article) to score political points against the Legislature.

Lt. Gov. Pat Quinn is back to using press conferences on Sunday to try to gain attention for (http://www.chicagotribune.com/news/chi-ap-il-quinn-payraises,0,5466116.story) his pet causes.

Legislators are more than willing to use the pay raise issue to try to score political points against (http://www.wbbm780.com/Lawmaker-Pay-Raises-Always-a-Tricky-Subject/2762796) their partisan opponents. Criticism has nothing to do with legitimate economic concerns.

In the end, the state Senate went along with the idea of holding off on salary increases for state employees (http://newsblogs.chicagotribune.com/clout_st/2008/08/house-meets-for.html#more) for this year.
Posted by Gregory Tejeda at 12:01 AM