What do Democrats really owe Hillary in the name of preserving party unity? 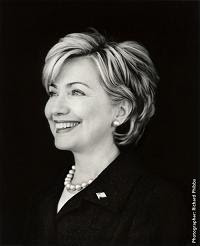 I’m going to “tick off” the ABOs and PUMAs of the world with this statement, but I don’t see the point of letting Hillary R. Clinton be included in the nomination process at the upcoming Democratic National Convention.

Party officials are thinking that a symbolic gesture of support towards Clinton will appease her fans and also be seen as a gesture of respect for the primary campaign she ran.

AFTER ALL, 18 million-plus people voted in primary elections across the nation for Clinton over Barack Obama. If not for the states that choose to use the caucus system rather than primary elections to pick their delegates to the nominating convention, the last week of August in Denver would be an over-glorified pep rally for Hillary instead of Barack.

Now I realize Clinton needs to be acknowledged, both at the convention and in the following weeks prior to the Nov. 4 elections, and (if he wins) during the years of an Obama presidency. She has earned the respect of Obama, even though he probably privately wishes he could engage in retribution against her for her primary campaign activities.

But I don’t see that allowing the delegates who are pledged to Clinton to vote for Clinton will be a sign of respect. In fact, I can see where it would be interpreted by the hard core Hillary fans as a bitter reminder that she lost the primary season of 57 elections and caucuses.

The intent of a presidential nominating convention, particularly in the modern era where the actual nominees are known in advance, is to serve as a political equivalent of a high school pep rally.

IT IS TO get the Democratic Party officials thinking of themselves as a unified team, getting themselves enthused and prepared for the “big game” – Team Obama takes on McCain High.

Instead, people want to dwell on the fact that the “semi-finals” between Team Obama and Team Hillary went to the final inning, with the Clintonites staging a late game rally that fell just short of victory.

It becomes a matter of what is the primary purpose of the 2008 Democratic National Convention – to pay tribute to Hillary Clinton or to begin the serious work behind getting Obama elected as 44th president of the United States.

The appropriate role for Hillary at the convention is to give her the keynote speaker role the night before Obama formally accepts the Democratic nomination for president. It gives her a chance to speak to the country, and in prime time television.

HER ADDRESS (WHICH has the chance to be the most memorable point of her life in public service) can be first-hand evidence that the Democratic Party can work together, despite the various factions that comprise it.

That is the key to taking into account the cantankerousness that lingers between Obama people and Clinton people. There was always truth behind the comment of Will Rogers when he said, “I am not a member of any organized political party, I’m a Democrat.”

That’s why I don’t get too concerned about those people whose political sensibilities these days are such that they qualify as members of “Anybody But Obama” or “Party Unity, My” tushie.