﻿ ﻿﻿﻿﻿Perhaps that is something we must all keep in mind with all the security cameras that police have erected around Chicago. You never know just when you’re being observed by the police.

That eerie feeling is the one I got from learning that three women got themselves arrested earlier this week for climbing into Buckingham Fountain, wading in the cold water, then climbing onto the fountain proper.
I’M NOT ABOUT to defend (or attack) these women, who appear to have got caught up in the spirit of summer’s end. They were at the fountain, got the urge to do something silly and fun, and now face a misdemeanor charge each of reckless conduct.
How did police catch them?
It seems that the security cameras erected around the city also are set on Buckingham Fountain – one of our city’s landmarks. Which means that an officer at the Police Department  headquarters at 35th Street and Michigan Avenue (about 3.5 miles away) saw the women get into the water.
That officer was then able to alert police officers in the downtown area to get over to the fountain and “deal” with this problem.
WHICH IS WHY when the women were ready to get out of the fountain on their own, they found two police officers on hand – with 10 more cops quickly following them up.
Regardless of what one thinks of how stupid it was to go wading in Buckingham Fountain, there is something about the image of a dozen police officers converging on three women – one of whom is still a teenager – that is a combination of comical and oppressive.
It sounds like a Saturday Night Live sketch about bumbling bureaucratic “boys in blue.”
Whereas the image of an officer at police headquarters being able to watch so many parts of the city nowhere near himself comes off as downright oppressive. It’s eerie that we literally have no clue when we are being watched, or which of our petty actions may catch someone’s suspicion.
FOR WHAT IT’S worth, the Chicago Tribune reports that the women don’t seem too apologetic for their stunt, which Chicago Park District officials say should be illegal because Buckingham Fountain is 83 years old and could easily have been damaged by their behavior.
One of the women literally talked about “youth” and how free spirits lead to “a transformation of a society and an individual for the best.”
Which strikes me as a lot of empty-headed hooey. When combined with the fact that I’d question how clean the Buckingham Fountain water is and whether I would want to wade around it it, I can’t help but think she may be a goof, but the police reaction still strikes me as a bit much.
But this is the trend in our city. Too many people seem willing to accept these cameras.
WHICH REALLY ARE all over the place in certain parts of the city.
The other day, I had a reason to drive through the South Side – specifically along 79th Street from the Dan Ryan Expressway west until I got to Damen Avenue. I lost track of how many times I looked up at a lamp-post and saw one of those boxes with the Chicago Police Department logo and the flashing blue lights replicating a squad car Mars bar – letting people who live in those neighborhoods know what the women at Buckingham Fountain apparently did not.
You’re being watched.
Seriously, I think it was six such cameras erected in that 20-block stretch of Street, although I may have missed some. I feel like my drive along 79th Street has been preserved for posterity – should the police suddenly feel the whim to look at it.
IT MAKES ME wonder just how many people the Chicago Police Department employs to sit in front of video screens and watch the content being produced by all those security cameras. It must be a virtual army of officers. 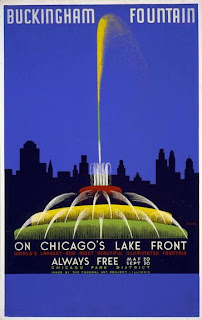 Either that, or more likely there is a good chance that much of what is being filmed never gets seen.
Which means that these three women who will have to go to court in coming weeks to learn just what the Cook County State’s Attorney’s office intends to do with them likely just had the dumb luck of having a police officer catch a glimpse of their particular camera at the exact moment they decided to take their dip.
A moment sooner (or perhaps later), and their wading in the murky water in the fountain would have gone unnoticed.
-30-
Posted by Gregory Tejeda at 12:01 AM