Thome didn’t ‘do in’ the White Sox

It is a vivid memory from recent baseball seasons past. The two big bats of the Chicago White Sox – Paul Konerko and Jim Thome – both managed to get base hits and are on base hoping that someone can follow them up with a hit that will allow them to score runs. 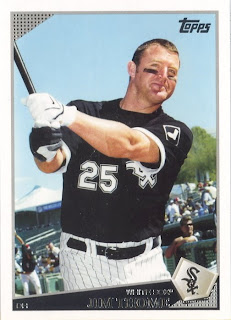 The problem, however, is that both Thome and Konerko, particularly Paulie, are dreadfully slow. They can’t run worth a squat. They’re the kind of guys who have trouble scoring a run from second base if someone hits a single.
IN SHORT, THEY clog up the bases. Several potential rallies that could have resulted in a few runs scored by the White Sox turned into a run or two – or a pitcher managing to get out of the inning with both Konerko and Thome stranded on base.
It was frustrating to watch. But it is the type of baseball that one gets to see too often when a team thinks that deep fly balls hit over the outfield fence are the key to success. Heck, Chicago Cubs fans know this better than anyone else.
It was the reason why when I learned just under a year ago that the White Sox were not going to bring back aging home run hitter Thome in 2010 for a fifth season on the South Side, I didn’t immediately have an outburst of anger.
When I heard manager Ozzie Guillen say how he wanted some flexibility and some athleticism in being able to put together lineups from game to game, I got where he was coming from. He was sick and tired of the base-clogging that took place in recent years just like many others were.
BUT IT SEEMS that “logic” is being ignored, because way too many people (including too many sports-related pundits) are quick these days to come to the conclusion that the reason the White Sox fell short of winning at least a division title is because they let Thome go.
What makes it worse, as they see it, is that Thome managed to latch on for the 2010 season with the Minnesota Twins, who last week DID clinch the division title. Twins baseball fans are quick to say it was Thome’s hitting that helped them fill the gap when star Justin Morneau was knocked out with a back injury for the entire second half of the season. 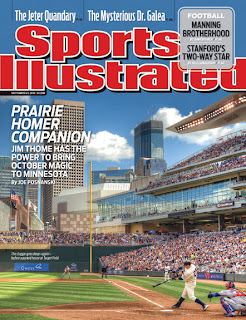 There are those people who for years have been getting on Guillen’s case who now want to claim this is the ultimate evidence that Ozzie doesn’t have a clue what he’s doing in running a baseball club on the field.
Sports Illustrated’s latest issue features a photograph of Thome at bat in the act of hitting a home run for the Twins, with a subhead saying that Thome “has the power to bring October magic to Minnesota.”
I’M SURE THE central Illinois native would be happy. If it happens (I’d favor either the New York Yankees or Tampa Bay personally), it would be a first World Series appearance for the slugger approaching 600 home runs in his career for the first time since 1997 when he was a young star with the Cleveland Indians.
But when I look at this year’s White Sox team, I honestly don’t think Thome would have made a difference. In part it is because Konerko has managed to come up with a season where he may wind up with 40 home runs (38 as of Sunday) and over 100 runs batted in. He still provided the team with the big bat that would have been essential to a legitimate contender.
What I see as the White Sox shortcomings is the fact that they lost the pitcher who was supposed to become the team ace half way through the season. If Jake Peavy were still pitching, I think we’d still have a competitive race – instead of a final week of the season that means little.
There also is the fact that those relief pitchers all managed to seem to lose it come August. Not just Bobby Jenks. I still remember the appearances of J.J. Putz back in mid-August – which is the point where in my mind the season really ended because that is where the gap between the two teams became big enough that it would have taken a miracle collapse by Minnesota (something along the lines of what the White Sox did when the two teams played in mid-September) for there to be playoff baseball on the South Side this October.
IF ANYTHING, THE difference between Minnesota and Chicago this season is that when Morneau suffered an injury that could have devastated their chances, Thome was in a position to fill the gap. When Jenks became unreliable in relief pitching, the White Sox came up with guys who became even more unreliable.
Which is my way of saying that had Thome somehow come back to the White Sox in 2010 and paired up with Konerko and the two of them had the kind of seasons they had this year, it wouldn’t have mattered.
The pitching problem would have overcome it.
We’d still be complaining about the White Sox’ inability to hold onto a lead in late innings And we’d definitely be griping about how ridiculously slow Konerko and Thome are on the basepaths – bringing a premature end to way too many a rally.
-30-
Posted by Gregory Tejeda at 12:01 AM