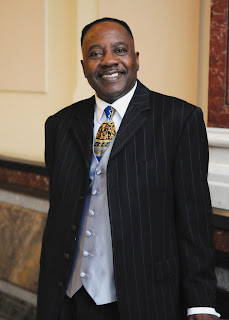 In my mind, all that means is that state Sen. Rickey Hendon, D-Chicago, is one of the nothings who got beat by political amateur Scott Lee Cohen. But then again, Hendon (who took 13.8 percent of the vote) is not someone who sees eye to eye with the political establishment.

FOR HENDON ON Wednesday made it clear that he expects people to include his name among the list of candidates for mayor of Chicago. The outspoken Hendon whose mouth makes him either beloved by his backers (who think he sticks up for them) or detested by his opponents (who think he is an embarrassment to Chicago politics, which says something considering some of the knuckleheads who populate our political scene) thinks it is time to move up the political ladder.

Of course, this isn’t the first time that Hendon has wanted something resembling a promotion from his 18-year-post representing the Near West Side of Chicago in the Illinois Senate. Hendon has run for seats in Congress, only to lose.

He also was the man who at one point was trying to get on the ballot for the 2010 elections both as a lieutenant governor candidate and as a Congressional hopeful (had Rep. Danny Davis, D-Ill., decided to retire, Hendon would have gone for his seat instead).

Now, Hendon thinks he has what it takes to be The Man on Five at City Hall, even though the one political accomplishment for which Hendon is noted in local political circles is that he is a former alderman who got “demoted” to the Illinois Legislature because his city colleagues were tired of his outspoken ways.

ADMITTEDLY, HENDON DOES cut a more colorful personality than the typical politico. He got the nickname “Hollywood” both for his flashy demeanor and because he once had aspirations to direct movies – although anyone who ever watched “Butterscotch and Chocolate” would say that Hendon will never be talked about the in same ranks with Martin Scorcese or Spike Lee.

But this was the man who also for awhile thought he could rise to national prominence by being an outspoken African-American critic of the concept of Barack Obama as president of the United States. It took the longest of time for Hendon to get on board with the concept that his one-time colleague in the Illinois Senate had surpassed him politically.

It was only when Hendon came to realize how ridiculous he’d appear in Chicago by continuing to hold out against Obama that he finally got on board – although his book about the 2008 campaign (which he wasn’t a part of) helps perpetuate the idea among those determined to believe it that Obama is somehow “not black enough” to be thought of as the first African-American person to be president.

Hendon declared his candidacy in a way typical of Hendon. He was on a Fox News Chicago morning news segment being interviewed about his political thoughts, when he said he was a candidate. He even went so far as to say he’d undo Mayor Richard M. Daley’s shuttering of Meigs Field – being willing to rip up the park that replaced it to restore a landing strip for small aircraft.

I WONDER IF Hendon thinks that will get him significant campaign contributions from the business community?

Admittedly, Hendon has the mouth to draw attention to himself and any campaign he would run. When considering that this campaign has the potential to be a free-for-all and that the winner is going to be someone who today doesn’t even come close to a majority of support, I have to say that anything is possible.

But then I wonder about the enemies Hendon has made throughout the years. Illinois Secretary of State Jesse White, who lives in Hendon’s legislative district, has never thought much of Rickey. And there’s also state Rep. Art Turner, D-Chicago, whom the political pundits believe was supposed to win the lieutenant governor nomination over Cohen – except that Hendon got into the campaign in part because he doesn’t get along with Art.

COULD THE TURNER allies wind up engaging in a little payback by ensuring that Hendon’s mayoral dreams go nowhere? Anything is possible.

Which is why I personally think the idea of Rickey Hendon running a mayoral campaign is really about little more than coming up with another good story. Since he is now a published author, perhaps he thinks next year’s campaign will give him a literary sequel.

At the very least, the presence of Hendon will make the political season more entertaining for us observers.