Do people really believe Eugene Sawyer was the last black mayor ever of Chicago?

We’re going to learn next spring just how far we truly have come with regards to race. At least that is how I perceive next year’s m 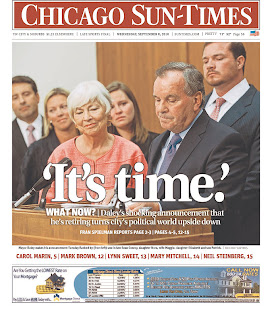 unicipal elections that will be held to pick a new mayor of Chicago.

For I couldn’t help but notice that the first person I spoke to after learning of Richard M. Daley’s intentions to not seek re-election in 2011 had as an initial reaction, “it looks like we’re going to have a black one again.”

SADLY ENOUGH, THAT person was not alone. I have heard several variations on that theme in the hours since. For as much as we’d like to think that we’re beyond the kind of nastiness that overcame the 1983 mayoral campaign and the years of Harold Washington, I’m not so convinced.

Some people are going to argue we have sent a black president to Washington, and have had a black state attorney general and two black people to serve in the U.S. Senate from Illinois. They are going to want to think we have moved beyond such considerations.

I wish we have. And this is one time I would love to be proven wrong come next spring.

But a part of me wonders if Chicago mayor is different, because there are people who perceive city government and its elections as being more important, and because of the belief that those other black officials were part of overall slates of candidates that gave people a chance to vote for many different people – some of whom they liked and some of whom they didn’t.

THERE ALSO IS the attitude that Washington political positions fall under that category of “up and out” – meaning we send people to someone else’s government, and not our own. 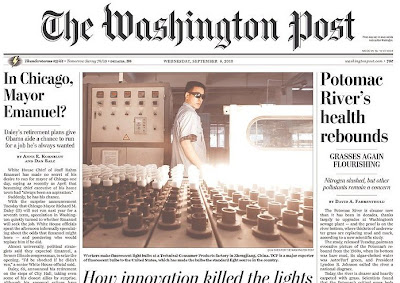 The Washington Post gave Richard M. Daley's so-called retirement Page One play, albeit behind the story about the Potomac River, while The Pantagraph of Bloomington, Ill., let Daley's future float among the newspaper's nameplate - with the story inside.

So how many people are going to have a visceral reaction in their gut if a serious contender happens to arise from the field of candidates, and that person just happens to be of an African-American racial persuasion?

Now I don’t expect the blatant racial politicking of 27 years ago. I don’t think we’ll see people walking around with those campaign buttons depicting a watermelon with a red slash through it, or t-shirts bearing the slogan, “Vote right, vote white.”

It will be the more subtle rhetoric, not all that different from those people who get all hung up on the concept that Barack Obama is a Muslim – because no “real American” could be anything other than someone exactly like themselves.

BUT I EXPECT there to be a tension, particularly since it makes sense that Chicago, with its significant African-American population (almost 40 percent of the total city) has an electorate capable of picking black people to run for that highest of city offices.

Be honest. There are people in Chicago who like to think that the whole concept of “black mayors” is just a stupid phase we went through a few decades ago, and that the reason we kept re-electing Richard M. Daley was because we outgrew it.

The reality is that the black candidates for mayor throughout the years, including men such as Timothy Evans, Danny Davis and Burris (who already has said he can’t afford the cost of a mayoral campaign next year), couldn’t unite enough of the black vote, and couldn’t make any traction among white voters – which was the key to the Washington electoral victories of ’83 and ’87.

I can’t help but remember the 2002 Illinois governor elections – the one where Rod Blagojevich became the first Democrat in 26 years to win that statewide office. What I actually remember is the Democratic primary.

FOR IF CHICAGO voters had had their way, we would have never had Blagojevich for governor. The city vote was won by Roland Burris – because of all the predominantly black wards on the South and West sides of the city that overwhelmingly preferred Roland, making up for the fact that Burris was irrelevant everywhere else.

If it had been up to Chicago, we would have had the concept of “Gov. Roland W. Burris” for the past few years. It was only because of the rural parts of the state that we got a Gov. Blagojevich.

Which means it is totally feasible that black Chicago is strong enough to win this election – particularly since there is no front-runner, Daley himself said Wednesday he has no intention of publicly endorsing a successor, and no candidate is going to come anywhere close to 50 percent of the vote.

If anything, it is that reality that Rep. Bobby Rush, D-Ill., referred to when he issued a statement about Daley’s departure that some political pundits are already lambasting as Rush playing the “race card.”

IN RUSH’S WORDS, “whoever (the new mayor) will be will have to come through my community.” As Rush sees it, too many people are trying to compile shortlists of who the frontrunners are, so as to exclude anyone else.

“Before anyone is deemed an imaginary front-runner in this particular race, they should pause and take that into consideration,” Rush said.

I think it is just being realistic to admit that Chicago’s sizable black population must be considered when figuring who the new mayor could be. I’d argue that people who want to disregard this factor probably are the true racists – it seems to me they’re interested in trying to ignore that particular group of voters. 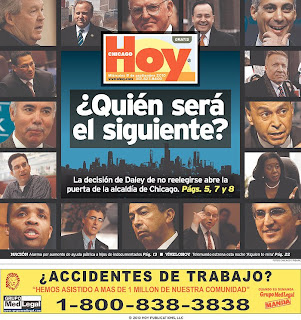 If anything, it is the reason why I most enjoyed Wednesday’s edition of the Spanish-language newspaper Hoy, which used its front page to put together a montage of local political people who could be the next mayor, and included a fairly multi-racial, multi-cultural group.

WHICH IS HONEST, because the next mayor could be anybody. There is no frontrunner. Whomever does wind up getting the position is going to be in a very tight spot on account of the economic struggles that have forced governments everywhere to make severe cuts in essential programs and services.

Which almost makes me wonder if what we ought to be thinking about the candidates for mayor in the 2011 election – regardless of race – is something along the lines of, why are they dumb enough to want the job to begin with?