It should never be a shock to us when an elected official says something that  essentially is knuckleheaded in nature. 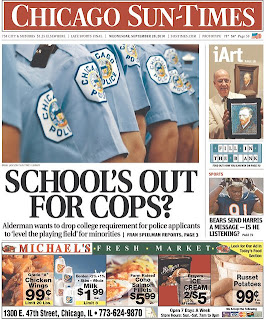 But a part of me is still trying to comprehend the logic (or lack thereof) that went into Ninth Ward Alderman Anthony Beale’s recent comments with regards to the way in which the city hires police officers.
CITY OFFICIALS EARLIER this week let it be known that they will administer another entrance exam (the first in four years) so as to create more potential police officers who can be hired and assigned to police districts that could use more staff to try to fight crime.
That led Beale to spout off about how he thinks the pool that will be created will be a flawed one.
Now let me state up front that I admire, and agree with, Beale’s goal of a potential cop pool that isn’t a bunch of young white Irish guys who will grow up into veteran white Irish cops. The alderman from the far South Side ward (the Roseland and Pullman neighborhoods) wants to ensure that there will be a significant number of people of various racial and ethnic backgrounds among the new hires.
Which only makes sense because Chicago is a city comprised of people of various racial and ethnic backgrounds. Our police should look like ourselves, not what the city’s composition looked like some 75 years ago.
MY PROBLEM IS with the idea Beale came up with to achieve it. One of the ways in which police departments have tried to upgrade their image and the skills of their officers is by seeking out people who have at least some college education in their backgrounds.
Currently, the city requires that someone have at least the equivalent of two years of undergraduate work. That could either be an associate’s degree from a community college, or two years worth of work towards that bachelor’s degree.
It doesn’t mean that anyone is requiring a college degree to become a police officer – although some of the more technical positions within law enforcement that an officer with ambition might aspire to probably do require significant technical knowledge and far more education than two years of undergraduate studies.
It’s not like anyone is even requiring that people wishing to work for the Chicago Police Department go to elite universities to obtain this education. It can literally be studies done at the City Colleges of Chicago, which probably would result in more people from the neighborhoods getting involved in local law enforcement.
BEALE SAYS HE wants to eliminate the college requirement because it discourages racial minorities from thinking about law enforcement. To me, it comes off as him claiming that black people somehow shouldn’t be expected to think in terms of higher education, if they want to advance in certain facets of our society.
I will be the first to admit that not everyone is cut out to attend a college. Then again, not everyone is cut out to be a police officer.
I don’t like the idea of lowering the bar of what we expect from potential police officers just because one alderman gets it into his head that somehow, college educations and racial minorities aren’t synonymous, or that college and cops don’t mix.
I think they do, and not just because much of the skills of law enforcement are so much more advanced than they were all those decades ago.
WHETHER WE CAN accept this fact or not, our society has become more technologically skilled in ways that require just about everybody to get some sort of advanced education. I’m not saying everybody needs a Master of Arts degree, or a Ph.D.
But just as we are now requiring more education of just about everyone in our society who does not want to be left behind, it only makes sense that our police officers should be treated no different.
At the very least, it exposes those potential new police officers to experiences with people in our society that they might not otherwise encounter. Which actually is what I consider to be a college education’s chief benefit.
People get exposed to others with differing experiences whom they might not otherwise encounter. Perhaps the military once served that role, but I wonder at times if the all-volunteer army we now have consists of limited types of people?
ONE OF THE last things we want is for our police officers to return to something resembling the old stereotype of the flatfoot cop walking his beat and having his knowledge amount to little more than knowing when it is appropriate to pull out his nightstick and use it on someone who is threatening to cause trouble.
I agree with Beale that I’d like to see more racial and ethnic groups represented in the Chicago Police Department. Yet perhaps the real solution is to make it more feasible for people in those groups who have interest in working in law enforcement to think in terms of obtaining a higher education.
Any time we get people to think in terms of setting the bar higher for themselves to achieve a goal in life, we are better off as a society.
-30-
Posted by Gregory Tejeda at 12:01 AM