Green Party doesn’t have any …

Green, as in cash. Which helps pay for all the equipment needed to hold campaign rallies, and cover the cost of all those posters to promote oneself, and also to buy the airtime on telev 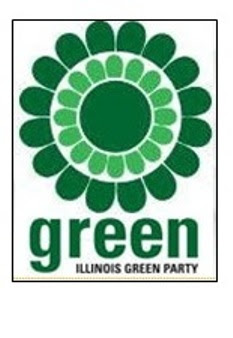 ision across Illinois – all to generate enough attention for one’s campaign so as to get voters to go out and cast ballots come Election Day.

The Green Party doesn’t have much in the way of finances, and it is showing in the fact that they’re lagging. In a year where the political pundits want to believe that voters are eager for change, any change, no matter how reckless, nobody is seriously looking to the Green Party candidates to provide that change.

HECK, IN ILLINOIS’ gubernatorial election, Scott Lee Cohen with all his personal baggage gets taken more seriously than does the Green Party nominee.

That fact is what caused Rich Whitney (who doesn’t seem to accept the fact that the only reason anyone voted for him for governor in the 2006 election cycle was a political fluke that is not about to repeat itself) to send out e-mails in recent weeks to the Green supporters asking for whatever donations they can make.

He needs the money to buy the airtime to draw attention to himself, or else he and the other Greens are going to be exposed on Nov. 2 for the irrelevant political movement that they have become in the Land of Lincoln.

Of course, that won’t stop the Green Party candidates in this state from shouting and screaming to try to force people to pay attention them. Already, the Green candidate for U.S. Senate is getting pushy with NBC news.

FOR ONE OF the events that is passing for a debate in that campaign is a live Sunday morning broadcast on NBC News. Alexi Giannoulias and Mark Kirk are appearing together on “Meet The Press.” Nobody invited candidate LeAlan Jones.

The official reason is that he’s too insignificant. He’s not drawing enough in the polls to show that he deserves to be included. Neither is Cohen. But he’s not whining about it. He’s just planning another expenditure to buy attention. Perhaps he could buy commercial airtime during the “Meet The Press” broadcast on WMAQ-TV that day?

That just leaves Jones out as a “fourth wheel,” which is pretty much typical of his Green Party colleagues – none of whom have a serious shot at winning their statewide or regional political posts.

WILL THE GREENS be relegated to the political dump heap of independent and fringe party candidates – one step above the Communist Party, but floating below the Libertarians? Which would mean their candidates would have to struggle to even get on the ballot – let alone win!

It wouldn’t be the first time that an attempt at creating a third major political party sank back into nothingness. Who else remembers the Harold Washington Party – which used to be a legitimate entity that put forth slates of candidates in our local elections.

But the party (which Washington himself had nothing to do with, he was a loyal Democrat his entire political career) eventually turned into nothing. Which is what I seriously expect to happen to the Green Party in Illinois – Born: 2006, Died 2010, R.I.P.

It is not exactly unfair. Any political party that picks as a candidate for Congress a person who has run past political campaigns as a Republican, a Libertarian, an independent and a Democrat (Rev. Anthony Williams, who is Rep. Jesse Jackson, Jr.’s, perennial opponent) comes across as the dumping ground for everyone else’s political failures and a place for the politically delusional to congregate.

PERSONALLY, I DON’T think most people in this state understand what the Green Party is about; for which I blame the Greens themselves. They haven’t done a thing to educate the public as to what they stand for, which is why they haven’t moved beyond the image of Ralph Nader to become a real political party.

There is the stereotype of the aging hippie and some naïve kids who haven’t outgrown their idealism yet. But there also have been the reports this campaign cycle of Green candidates using campaign tactics and issues meant to appeal to the more conservative voters. I’m probably not the only person in Illinois who is confused about what the party has become.

I may be one of the few who cares enough to try to find out. Most people, I would suspect, merely write them off as a hopeless case, and move on to other candidates.

Which is the reason why nobody’s coughing up the kind of contributions needed to help fund campaigns (since the types of people who are wealthy enough to pay their own way are most likely the ones who view the Green Party faithful as everything that is wrong with our society), or willing to include them in their debates.

JUST AS JONES isn’t being given equal time with Kirk or Giannoulias, it is unlikely that Whitney will get to appear as an equal candidate with either Gov. Pat Quinn or Republican challenger William Brady. I’m sure it is just a matter of time before Whitney issues another whiny e-mail to complain.

Personally, I’ll try not to yawn with boredom too loudly at his complaint before shifting my attention span to something else.

I am surprised this blogger was so naive to overlook the main difference between Scott Lee Cohen and Green Party candidates like Rich Whitney and LeAlan Jones: money.

Whether or not it's an accurate determination of the voters, money buys legitimacy in the mainstream/corporate media. The reason why LeAlan sent NBC that letter is because he, like most Americans and unlike most politicians, can't afford to just buy an ad during Meet The Press.

If you are content with millionaires and billionaires running this country, keep yawning. If you feel like they are stepping on everyone else who is working hard and still coming up short, then get up off your butt and let's get to work.

The reason why the Greens are thought of as idealists is because we still have hope for this country. Pessimism is for the Republicans and complacency is for the Democrats.