What are the chances that President George W. Bush, on his final day in office in January 2009, grants a pardon for former Illinois Gov. George Ryan – thereby commuting his sentence to time served?

I know that the very thought of 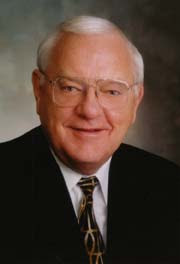 anything other than Ryan dying in prison will make a segment of the Illinois population very unhappy, and that there likely was a feeling of joy going through the minds of certain people when they learned Tuesday that the Supreme Court of the United States refused to hear Ryan’s appeal.

BUT I HAVE to admit that when I first learned that Ryan had failed in his last legitimate chance at a successful legal appeal and elimination of his prison sentence, my thoughts turned to Bush.

It seems inevitable that every single outgoing president has a pardon controversy. Ronald Reagan showed compassion to those caught up in the Iran-Contra affair, while Bill Clinton was accused of giving pardons to people who had previously been his campaign contributors.

Would Bush feel any sort of compassion for Ryan, who currently is 74 and would be pushing age 80 by the time he finishes “his time” – assuming he actually lives that long.

I wonder if Ryan’s age and health factors (he’s diabetic and suffers from Crohn’s Disease – an inflammatory bowel disease) could sway Bush into showing some compassion.

AFTER ALL, HE’S old and sick, and by January 2009 would have served just over one year of his life in a prison environment. Some might think that sufficient punishment for Ryan’s infractions (which amount to looking the other way and ignoring the fact that his staffers in the Illinois secretary of state’s office were soliciting bribes).

That means he’s working in an environment where he’s in the shadows of one of the most intense prison environments in the country – Terre Haute is the facility where the federal government houses its “death row” inmates and performs its executions (the last of which were Timothy McVeigh and Juan Garza in the summer of 2001).

An argument can be made that the last thing the federal government really needs is to have to deal with Ryan’s declining health.

THERE’S ALSO THE fact that since the criminal conviction was kept intact (never overturned, despite vociferous written opinions by various appeals court judges), the loss of his sizable government pension remains in place.

He’s penniless and sick. What more is there for George Ryan to lose? Unless you are of the perspective that justice will only come if he gets knifed by a fellow inmate during a cafeteria brawl, then there isn’t much of a purpose to continuing to keep him in Indiana.

Ryan could easily slink back to the Kankakee area and live out his life as a broken man, which was the fate of Ryan’s opponent in the 1990 campaign for Illinois secretary of state – Jerry Cosentino. He got caught up in his own federal corruption trial and died with a criminal conviction, and only avoided prison because he sold his house to pay for the attorneys who kept him free. At the time of his death, he was broke and lived with his daughter.

Of course, I’m not completely convinced Bush would grant the pardon, although I expect him to grant a few to his political allies who managed to get into trouble during the past few years.

THE PROBLEM IS, Ryan may have been of the Republican Party, but they had ceased to be political allies.

Bush was the Texas governor who presided over so many executions (about one every two weeks at their peak), while Ryan was the guy who presided only over one (Andrew Kokoraleis), had trouble bringing himself to allow it to happen and wound up stirring up national attention against the death penalty when he imposed the still-intact moratorium against executions in Illinois.

Could I see Bush deciding to ignore a Ryan pardon application on the grounds that he doesn’t want to dignify anything related to the Ryan record – which includes death penalty opposition?

IN FACT, I wonder if people who talk about a pardon for Ryan are as misguided as the attorneys for Garza, the Brownsville, Texas, drug dealer who was put to death for a series of murders along the U.S./Mexico border, who actually appealed to Bush for clemency, saying they believed Bush would look at the death penalty differently now that he was president, and not just a Texas governor.

People who talk about pardons for Ryan note that dozens of people will be put on a list for Bush’s consideration. They want to believe it would be easy for Ryan to slip through, unnoticed.

Except that when it is Ryan, everything he will ever do for the rest of his life will gain extra attention. People who want him punished because of his activities with the death penalty (or those who seriously believe he “killed those kids” when an improperly-licensed Illinois truck driver caused an accident that killed six people) will ensure that his name shoots to the top, and a Ryan pardon would wind up being yet another blot on the legacy of George W. Bush.

So what is the Ryan legacy?

THERE ARE THOSE who want to spin it so that it is nothing more than a political official who went to prison.

I honestly believe that is a ridiculously narrow view from people who resent the fact that Ryan forced the concept of capital punishment in this country to be debated by government officials.

Ryan is the political official who was willing to address the issue of flaws in his state’s capital crimes statute at a time when the Illinois General Assembly wanted to ignore the issue and pass it on to someone else.

That doesn’t really warrant the Nobel Prize – as some people have tried in recent years to pursue on Ryan’s behalf.

BUT IT LIKELY will be the reason that a pardon request will not be taken seriously. The issue’s existence is the reason no one can rationally discuss the Ryan legacy.

And it is the reason why I still keep a photograph of Ryan hanging on my office wall (the picture is of Ryan being interviewed by myself during the 1997 Illinois State Fair in Springfield). He was an old-school politico who got things done and didn’t get caught up in the political partisanship that has poisoned modern-day politics.

And he also was one of the most interesting characters I will ever write about.

EDITOR’S NOTES: George Ryan’s hometown newspaper, the Daily Journal of Kankakee, does its own pondering of the possibilities of a presidential (http://daily-journal.com/archives/dj/display.php?id=421347) pardon for the former governor.

As expected, the federal prosecutors who handled Ryan’s criminal case don’t want a presidential pardon (http://www.chicagotribune.com/news/local/chi-george-ryan-appeal-denied-webmay28,0,6489600.story), seeing any granting of clemency as a blotch on their own legal legacies.

Aside from surprise that the criminal conviction actually withstood legal appeals, my basic viewpoint of George Ryan hasn’t changed (http://www.upi.com/NewsTrack/Top_News/2003/01/12/analysis_death_row_dead_kids_for_ryan/3528/) much since his final day in office in 2003.
Posted by Gregory Tejeda at 12:01 AM