Can Newsday offer Sun-Times a lesson? 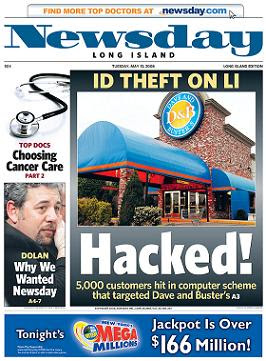 imately decide they can get a better tax break by folding the paper than they would a sale price by selling it) is to be a sister company to Comcast Cable?

If Tribune Co.’s recent sale of Long Island-based Newsday is any indication, it could be.

THE BIGWIGS WHO run the nationwide information and entertainment conglomerate from the gothic tower on Michigan Avenue recently dropped their interest in Newsday from controlling to just over 3 percent.

Newsday is now controlled by the people who run Cablevision, which is New York’s answer to Comcast – controlling what people get to watch on television and charging excessive rates for hundreds of channels of mediocre programming.

Yet to listen to Cablevision executives, they see Newsday as a brand name that they can leach off of in putting together news-oriented products on the Internet, and perhaps on television.

“Newsday TV” – a cable television channel that provides intensely local news programming unlike what is offered by the network owned-and-operated stations in New York City. That is one vision of what could become of the newspaper property in the New York suburbs that Cablevision has just acquired.

SOMEHOW, I DOUBT they paid over $600 million just so they could operate printing presses on Long Island.

For those of us who wonder the fate of newspapers, this is probably it.

The simple fact is that newspapers do have tremendous archives of material (unless they were short-sighted and turned it all to mulch). They provide more detailed accounts and better information than any other form of news media.

So it would make sense that people would want to turn that credibility developed over decades into a news product that can be used on other mediums.

TELEVISION IS THE most obvious – trying to feed off the credibility of newspapers, combined with the video skills of the broadcasters who also are losing viewers to people who’d rather sit in front of a computer screen (or, in some cases, would rather have a little audio and video snippet fed to their cellphone) to get a story.

I can see it happening in Chicago too.

Tribune Co. was always big on pushing the concept of “synergy,” getting their newspaper people to take their local television stations into account when rooting around for stories, while also getting their broadcasters to undertake projects that promoted the image of their local newspapers.

The big problem with Tribune in recent years wasn’t that synergy itself was a bad concept. It may have been that Tribune was trying to do too much in too many places, all in its attempt to create itself into a national media company.

THERE IS A natural tie between the Chicago Tribune and WGN (both the radio and television versions) that allow for Chicagoans to accept the notion that they work together. It is why the concept of ChicagoLand TeleVision seems logical – even though poorly executed at times.

Such a bond has never existed in Los Angeles between the Times and KTLA-TV or in New York between Newsday and WPIX-TV. (Whether Tribune could have succeeded if they had never sold off the New York Daily News is a different debate for another day).

Cablevision, which already provides television programming and sports in the New York area, would have a logical tie to a New York newspaper. The fate of newspapers that manage to survive in some form is probably to develop as many local ties and offshoots as possible.

If this means the day will come when Tribune Co. is nothing more than its Chicago properties, that is probably a good thing. People in the news business have long accused Tribune Co. of taking on actions that hurt their properties across the nation because they were more concerned about propping up the Tribune and WGN.

PERHAPS A CHICAGO-focused Tribune Co. (instead of having to worry about how the Los Angeles Times’ long-standing financial difficulties will drag down the company as a whole) will figure out a way to succeed. Perhaps Los Angeles-oriented ownership is best for the Times.

And perhaps Cablevision (a company that knows nothing of newspapers but understands the New York market) can figure out the way for Newsday to exist long-term.

So that takes me back to the original concept of this commentary – what about the Sun-Times?

If that news-gathering entity is to have a long-term future, it is going to be in the form of a business entity that wants to develop a Chicago-specific news product.

THERE ISN’T GOING to be some out-of-town newspaper tycoon with deep financial pockets who will come in and take over the Sun-Times out of some deep moral concern for the information needs of the people of Chicago. Newspaper tycoons only spend money on publications in markets with no competition.

Its future owner is going to be someone who wants to peddle information about Chicago and who thinks that the brand name “Chicago Sun-Times” still carries a lot of weight and could give instant credibility to any new venture.

Some people think the Sun-Times could follow the lead of the Capital Times newspaper of Madison, Wis., which recently converted itself to a once-a-week newspaper whose primary focus is now (http://www.Madison.com/tct/) its website.

I personally see this vision of Comcast deciding it can make money off a Chicago-oriented cable news channel (they already do Comcast Sports Chicago, channel 37 on many cable systems across the Chicago area).

THEY COULD HIRE up a new crew of kid broadcasters and put together something on the cheap, like they do with the local news interview inserts that run every half hour during the day on CNN Headline News.

Or they could use the brand and resources of the Sun-Times to give themselves some instant credibility – creating the image of more in-depth news than that offered on the conventional local television stations.

In fact, we could someday see the Chicago Newspaper War converted into something that is not fought on newsprint – Tribune-owned CLTV takes on Sun-Times/Comcast, with the two channels trying to convince the news consumers of this area that they offer the best, most-detailed report.

Both would probably also have web sites, and that would be where the archives of the two newspapers could be found – digging up the actual news accounts to provide the first-hand reports of when the significant events of Chicago took place.

SUCH A COMBINED Internet/broadcast combination is likely the future of our local news media. If Comcast isn’t the company to do so, perhaps someone else will take on such a venture.

Some will argue that it is just inevitable that Chicago will become Tribune Co. turf. Their products will control our local news reporting. I disagree, because I know there is a significant portion of the Chicago news consumer who (for whatever reason) wants nothing to do with Tribune and ignores its properties. There is a large enough market for a competitor. Money can be made by a sharp operator, particularly if they can combine newspaper expenses with their other media operations.

Of course, we’d have the inevitable battle over what to call such a new venture. Sun-Times/Comcast sounds right, but I’m sure there are those who would insist on putting the corporate Comcast portion first – just like it became AOL/Time-Warner when those media properties tried a joint venture a few years ago.

I must admit that while I will miss the feel of newsprint (and the concept of stories laid out on big pages in easy-to-read formats), I find such joint ventures a much more pleasant concept of the media future than the idea of the newspaper legacies dying out altogether and news reports falling into the hands of corporate types who think the First Amendment exists solely to let them sell advertising at overpriced rates.

EDITOR’S NOTES: Cablevision officials are trying to figure out how Newsday can help their (http://www.newsday.com/business/ny-bzdola135684073may13,0,6390185.story) media properties become a larger company as a whole.

It will take drastic measures to prevent the brand name of the Chicago Sun-Times (http://www.chicagotribune.com/business/chi-fri-earnings-may09,0,5984608.story) from joining the ranks of the Chicago Daily News, the Herald-Examiner or the original Chicago Argus – namely, that of defunct newspapers.
Posted by Gregory Tejeda at 12:01 AM