Don't they realize that Daley-speak could give them one of the most unusual commencement speech experiences ever?

I have always thought of Northwestern University types as a batch of whiny fools from out-of-town whom we Chicagoans are forced to endure in our midst. Now, I have the bit of evidence that proves my point. 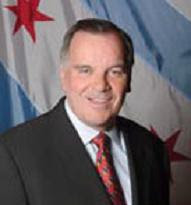 k they attend college in the nitty-gritty, urban atmosphere of Chicago) are upset that their graduation ceremony on June 20 will have the ultimate face of Chicago present – Hizzoner Jr.

RICHARD M. DALEY will give the commencement address, and will be the recipient of an honorary doctor of laws degree. His presence is meant to provide the 2008 graduation events with its unique touch.

Northwestern University officials actually thought their announcement would garner some positive press, since Daley is not the type who needs to feed his ego by seeking out commencement speeches (unlike someone like television personality Tavis Smiley, who is doing at least four graduation speeches this spring).

But all they got were complaints from students who feel that Daley is not worthy of their time.

One student who posted a message on the website of the Daily Northwestern student newspaper went so far as to say that Daley does not deserve to speak to them because he only attended DePaul University – which makes him not that bright. Another student sent his complaints by e-mail to university President Henry Beinen, who shot back a response that the student should “grow up.”

I HAVE TO agree.

It dismays me that a new group of students is going into the world who did their college time so close to Chicago, yet seem to have no comprehension of just what it was they experienced while living here.

Daley is a national figure, both because of his family’s political legacy (his father and brothers) and because of the size of his home city (just under 3 million people, and the focus of more than 8-million person metropolitan area).

Daley has responsibilities that would extend beyond those of governors of small and mid-sized states. In fact, some people would argue that the reason Democratic politics in Illinois is in such disarray these days is because our governor doesn’t like the fact that Daley is more powerful than he is.

DALEY FALLS INTO the same category of politicos as the nationally known mayors of New York and Los Angeles.

Yet I don’t hear the student bodies of the University of Pennsylvania (where New York Mayor Michael Bloomberg is giving the commencement speech this year) or Occidental College (where Los Angeles Mayor Antonio Villaraigosa will speak) claiming their educational experiences will be sullied because all they got was a mayor.

Now some of the students said that, if they had to get a political person, they would have preferred someone of the stature of Sen. Barack Obama, D-Ill. That is just a case of students being clueless about the realities of politics.

Obama’s career advanced beyond the realm of representing Hyde Park in the Illinois Legislature because he made his ties to the political power of Daley and the Democratic organization in Chicago. In the world of politics, Daley is bigger than Obama until the day Obama takes the oath of office as president.

THEN, DALEY’S REPUTATION will grow even further nationally because he will be able to claim he “made” Obama into a nationally worthy figure.

Even if it’s not really true, it will be what people across the country will want to believe, particularly those who want to smear Obama with Daley because they believe the mayor represents everything that is wrong with politics in the United States.

There’s also the fact that Obama doesn’t appear to be doing any commencement speeches this year (running against John McCain is keeping him busy). But he has done four such speeches since becoming a U.S. senator, including the Northwestern address of 2006.

These Northwestern geeks apparently view Obama as their personal motivational speaker. It’s a good thing that Northwestern looked to someone else.

NOW I WILL be the first to admit that the thought of Daley giving a speech makes me chuckle a bit. He is far from a classic public speaker. There will be those who will giggle at the way he exits a sentence from a different grammatical universe than he entered it.

But his blunt-spoken earthiness can be reassuring. It tends to make you think this man is speaking the truth – even when he’s engaging in political double-talk. It is a significant part of the man’s appeal to Chicago voters during the past two decades.

What I’m saying is that the man who once told a gathering of reporters that, “you’d want to know if there’s a rat in your sandwich” when asked about citywide crackdowns on unsanitary restaurants is likely to come up with a good line or two – something that will be remembered.

It’s bound to be more memorable than the other local politico who gave a commencement speech – Illinois Attorney General Lisa Madigan spoke to the graduates of Chicago-Kent College of Law.

IF ANYTHING, WHAT a student should want from their commencement speaker is a quotable line that will help break up what otherwise is a dreadful routine of pomp and ceremony. Somebody with the potential to be funny is better than someone deadly serious.

I still remember by own graduation from Illinois Wesleyan University in 1987. After four years of academia, Dr. Robert Jay Lifton gave me his advice. He chose to speak on the subject of “Our Nuclear Age – a Time of Hope.”

Was it awful! He spoke in a monotone and, to this day, I cannot remember a single line of what he said. In fact, my only real memories were looking over at my family and seeing my grandmother literally asleep, and my stepmother’s father spending the rest of the day ragging on me for making him have to sit through such a dreadful speaker.

DALEY IS NOT the classic orator. But he will give the Northwestern kids a memory they won’t forget, even if they still have a buzz going from the wild partying they did the night before commencement.

Besides, it could be worse. The university could have followed the lead of many colleges in picking out an alumnus who has “made good.” Northwestern could have sought a local politico by picking Blagojevich to speak (he received his bachelor’s degree from there in 1979).

His nasally tone and lack of anything significant to say would be dreadful to sit through, as I’m sure the graduating students at the University of Tampa (where Blagojevich also attended for a couple of years) who endured his commencement speech on May 10 would testify to.

EDITOR’S NOTES: Northwestern U. types are miffed they didn’t get a Hollywood celebrity to speak at their graduation (http://media.www.dailynorthwestern.com/media/storage/paper853/news/2008/05/28/Campus/Chicago.Mayor.Richard.Daley.To.Speak.At.Commencement-3375913.shtml?reffeature=recentlycommentedstoriestab). Perhaps they’d prefer the Law School’s commencement speaker?

The Dalai Lama (http://www.chicagotribune.com/business/content/education/chi-daley-northwesternmay29,0,1022702.story) would have been a catch.

So who is speaking at which college for the honor and glory of receiving (http://chronicle.com/free/speakers/?handler=search&Last_Name=&Institution=&State=&order=&year=2008) an honorary degree?

I realize he was academically distinguished, but Robert Jay Lifton managed to leave a (http://globetrotter.berkeley.edu/people/Lifton/lifton-con0.html) number of students under-whelmed when he gave a commencement address in 1987.
Posted by Gregory Tejeda at 12:01 AM

I agree. Read my comment on my blog at absurdtosublime.blogspot.com

I'm sorry that you feel Northwestern students are such a nuisance to the city. Your generalization about NU students is quite off the mark and it's obvious that you have never taken the time to even speak with students at the school. Although the main complaints broadcasted by the media have been about Daley being unknown, a large population of students also question Mayor Daley's ethics. A commencement speaker should be someone who can inspire, not invoke concerns of political corruption. In addition, it's also frustrating to have a school administration and trustee members that use its student body to play favors with their political buddies. So, even though this whole controversy has became overblown, it's not something that should be used to generalize all students at NU, when most of them are not only hardworking, respectful, but more socially conscious than most of the politicians in this country. Although you claim that the students at Northwestern need humbling, your comments and attitude clearly indicate that you should also take some of your own advice.

"There will be those who will giggle at the way he exits a sentence from a different grammatical universe than he entered it."

This bit of irony made me giggle.

That, and an IWU graduate calling NU students "geeks." Hilarious! We've never heard that before! Where did you develop such witticism, a fifth-grade lunch table? Perhaps if you went to Northwestern you'd have a real job in journalism.