I can remember not all that long ago when I would actually make a special trip southeast whenever I wanted to fill my automobile’s tank with gasoline – I justified it on the grounds that a drive across State Line Road into Indiana could get me gasoline for under a dollar a gallon.

I was being a tightwad in making the drive – since I didn’t want to pay the “ridiculous” rate of about $1.20 per gallon, or up to $1.40 if I were to get gasoline at a station near downtown Chicago.

NOW, OF COURSE, it seems like an Impossible Dream (cue “Camelot”) that gasoline was ever that cheap. On Sunday, for the first time in my life, I paid over $4 for a gallon of gasoline. The $15 that once would have nearly filled my car’s gas tank got me barely more than a quarter of a tank, which will keep me moving for a little while.

And today, I learned that the $4.09 per gallon I paid makes me the norm for a Chicago-area motorist – the Lundberg Survey says $4.07 per gallon is the average in Chicago, which makes us the most expensive metropolitan area in the continental United States.

At that price, a trip to Indiana for gasoline comes to a waste of time, particularly since I don’t really notice any significant difference anymore between gasoline prices in Cook County and Lake County, Ind. I’m certainly not going to drive deep into rural Indiana in search of cheap gas. I’d use up more than I’d save. 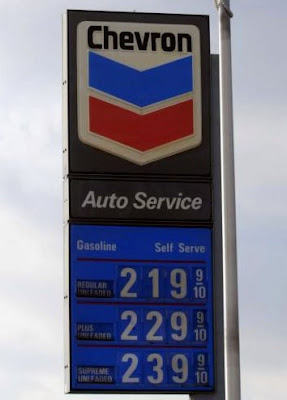 To "dream, the impossible dream" that gasoline will ever be as cheap as these once-outrageous rates is the status of our automobile-dominated society.

This is just absurd. What logical reason is there for gasoline to be so expensive?

I DON’T WANT to hear about other countries where the price of gasoline has been higher than the equivalent of $4 per gallon for so long that they would dream of gas so cheap. Nor do I want to hear about places like Alaska or Hawaii, where basic commodities have to be shipped in and everything costs more.

I figure anyone who willingly lives in such an isolated place obviously gets so much pleasure from the locale that they accept higher gas and food costs as the price of living in “paradise.”

Besides, as of Monday, the average gasoline price in Anchorage was $3.89 per gallon, with some places selling it for as little as $3.83 per gallon. That’s the price we in much of the Chicago area were paying as recently as the end of last week.

Now some people will argue that these ridiculous gasoline prices are evidence that we ought to rely more on public transportation – which I have no problem with in theory. I am a big fan of the convenience of elevated trains and the Metra suburban commuter trains, which I have used whenever possible during my times living in Chicago proper and some of its surrounding suburbs.

BUT THERE ARE large swaths of the Chicago area to which public transportation is just not convenient (the stations are too far away, or the trains and buses run too infrequently).

Expanding service also isn’t a political reality, because there are too many people who perceive the issue of mass transit as some sort of liberal plot to take away a person’s automobile (just like some suspect the liberals want to take away their guns too!).

We are a car-based society. Why else have these ridiculous gasoline prices not caused a significant drop in the number of motorists?

People still have to get to work and to other places that are a part of their lives, and very few people live in communities where everything is within walking distance or a short bus ride away. I personally am working a job these days requiring me to make about a 20-minute drive, but would require something like two hours and three bus transfers to complete each way if I tried to do it with existing Chicago-area public transportation.

IT’S NOT PRACTICAL. For many people, it’s not possible – even if they wanted to take the bus (which many do not).

We’re hooked on cars, meaning we’re going to keep paying and paying these ridiculous prices (which don’t even make profits for the gas station owners – who are dependent on us buying overpriced slurpees, chips and lottery tickets in significant quantities in order to make a profit) for gasoline.

How about $5 per gallon? It’s not a ridiculous nightmare – it will be a reality, and the gasoline manufacturers know we will do little more than grumble every time we dig into our wallets to pay it.

We need serious relief on this issue. And I mean real relief, not some political hack spewing out rhetoric that amounts to nothing.

THAT IS WHY I actually gained a bit of respect for Democratic presidential nominee Barack Obama when the whole issue of gasoline prices came up during the campaign a few weeks ago and he was getting smacked around by his opponents for refusing to support talk of easing the federal government portion of the gasoline tax.

In theory, that would reduce the price of gasoline by a few pennies, and some people want to have dreams that those pennies would add up into significant dollars that would remain in the consumer’s wallet.

In reality, the amount is so small, that (based on the Obama campaign’s calculations) the total savings for a “typical” motorist would be about $20 – over the course of the entire summer of 2008.

In my car at the current gas price, $20 is about half a tank. For people who drive those SUV monstrosities to lug their kids around from activity to activity, $20 is as little as a quarter of a tank.

THAT PLAN, PUSHED in slightly different forms by Democrat Hillary R. Clinton and Republican John McCain, would not have offered serious tax relief, but the political people would have spun it to make it appear as though they were doing the American people some great favor.

What impressed me about Obama was that he remembered the “gasoline tax holiday” (that’s the political-speak way of making it sound so cute) that the Illinois General Assembly approved back in 2000 when gas prices were so out of control in this state that they were “threatening” to go over $2 per gallon (remember that?).

Obama voted for it, only to see the gasoline manufacturers boost their own prices so bolster their profit while keeping gas prices overall at the same level. He said he wishes he could have taken that vote back

This was probably one of the few times a public official (particularly one running for president) opening admitted to making a mistake. It is perhaps the only time that a public official appeared to have learned from his mistake – and hopefully will not repeat it again.

EDITOR’S NOTES: A lot of good it does me to know that gasoline in Tuscon, Ariz., goes for $3.48 per gallon, since I (http://www.chicagotribune.com/business/chi-gas-prices-web-may19,0,7796647.story) have no intention of moving there anytime soon.

For those of you willing to make a drive (and use up existing gasoline to find slightly-less expensive new gasoline), here is a place (http://www.chicagotribune.com/business/chi-localgasprices-map,0,2994228.htmlpage) to find the current gas prices across the Chicago metropolitan area.

Some “experts” seem to think that gasoline prices nationally will “top out” at about (http://www.hattiesburgamerican.com/apps/pbcs.dll/article?AID=/20080519/OPINION01/805190316) the level we here in the Chicago area are paying now.
Posted by Gregory Tejeda at 12:01 AM

Repealing the federal tax amounts to about .45 cents a gallon. Work with me here. That is almost a dollar saved for every two gallons of gas put in your car. On a car with a 15 gallon tank that's about 6 dollars saved with the first fill up. So where does this only 20 dollars saved over a summer come from?