Obama’s “up and out” presidential move creates political shifts for U.S., Illinois

In a sign that Democrats are adjusting to the concept of Sen. Barack Obama, D-Ill., as their party’s nominee for president this year, the attention of the party faithful is shifting away from the primary and toward figuring out who else gets a boost up from Obama’s political coat-tails.

Nobody (outside of the most hard-core members of Camp Clinton) seems to care much about what Hillary Clinton is saying. They want to know who’s going to get a bump up (and nobody except for those most hard-core of members thinks it will be Hillary) from Obama.

BUT HERE’S THE difference between Chicago political junkies (those people who think that the most powerful political position on Planet Earth is destined to be held by a descendent of Richard J. Daley), who want to know who would get the U.S. senate seat from Illinois if Obama wins on Nov. 4.

The rest of the world’s political observers want to know which white guy gets to be the first ‘second banana’ ever to a bi-racial presidential hopeful. Vice President is on their minds.

In what appears to be the worst kept secret in electoral politics today, Obama is seeking the help of political people who have helped past presidential nominees in choosing a running mate. 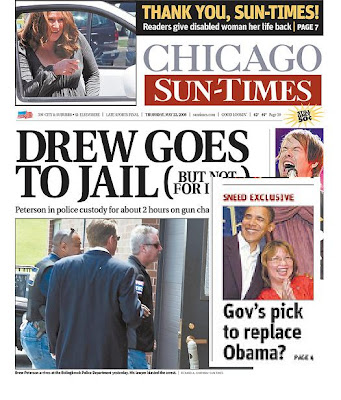 To the Chicago political junkie mentality, this was the true "big story" of the day, not the latest in the ongoing saga of Drew Peterson or talk about vice presidents.

The secretive nature (which has only been reported by the New York Times, Wall Street Journal, CBS News and the Atlantic, just to name a few) of this vice presidential search is because Obama realizes he has not officially clinched the presidential nomination. He could theoretically turn into the political version of the Chicago Cubs and pull a late primary collapse of historic proportions.

BUT OBAMA ALSO realizes that if he is to have a vice presidential selection ready to appear with him during the summer months and in Denver at the Democratic National Convention in August, he has to start looking now.

Speculation says Obama will search for the whitest, most blue collar-appealing political person he can find so as to moderate the fact that he clearly is not the type of person who would “fit in” in a place like West Virginia.

The vice presidential nominee will be someone of moderate to conservative social beliefs whose cooperation with Obama will be used as a sign that Obama can work with people of all political beliefs – even though he himself falls on the liberal side of the social spectrum.

If anyone thinks that such a strategy is ridiculous, keep in mind that Republican presidential hopeful John McCain is considering something similar – in reverse.

I COULDN’T HELP but notice that among the political people being invited to a social event at McCain’s home in Sedona, Ariz., is newly elected Louisiana Gov. Bobby Jindal – whose parents came to the United States from India. A McCain/Jindal top of the ticket for the Republican Party would (in a sense) balance out the exotic/conventional pairing that likely will take place on Democratic ballots for the Nov. 4 elections.

I can already hear the comparisons from social conservatives. Jindal is the man who actually changed his first name from Piyush to something he thought sounded more “American” and who has gone out of his way to downplay his ethnic background. They will contrast that to the man named “Barack” whose background is so different from their own.

One can never underestimate the appeal of racial- or ethnic-based campaign strategies. They’re ugly, but they can scare a certain type of voter. Considering that a Gallup Organization survey released Thursday showed Obama with a slim 47 percent to 44 percent lead over McCain, it wouldn’t take much of a shift to put the Republicans in the presidential lead.

BUT THERE’S ALWAYS the possibility Obama might just go all out in being different from any other campaign – he might go for a woman as a running mate, particularly if he can find one with moderate political beliefs.

Someone like Arizona Gov. Janet Napolitano or Kansas Gov. Kathleen Sebelius could be a way of reaching out to the women who are disappointed that their choice of Clinton did not get the nomination.

Some have even tossed out the possibility of New Mexico Gov. Bill Richardson – who is of Mexican ethnicity on his mother’s side of the family. But having the former U.S. ambassador to the United Nations and a presidential cabinet member reduced to the level of the ceremonial rituals that vice presidents do might be considered too low a drop for him to consider seriously.

It also is the reason why picking Hillary Clinton as vice president is a ridiculous suggestion – she is going to want something more significant. Considering how much support she got for her presidential bid, she probably is entitled to it.

BUT TO SOME Chicago political people, all of this speculation is pointless. Unless there was a chance that Obama would pick another Chicago City Hall type to be his vice presidential nominee, they don’t really care who gets to run ribbons at ceremonies and make ritual trips to the less prominent foreign countries of the world.

They want to know which local political person gets to go to Washington to serve in the U.S. Senate, making that person one of the Big Four of Illinois politics (Mayor Richard M. Daley, Sen. Richard Durbin and Gov. Rod Blagojevich are currently the other three).

Admittedly, it is just a “SneedScoop,” which means there’s a good chance that it’s wrong. But the Chicago Sun-Times’ columnist Michael Sneed reported Thursday that Illinois Department of Veterans Affairs Director Tammy Duckworth would be Blagojevich’s likely choice to replace Obama, should he move “up and out” from Illinois.

For those with short memories, Duckworth is the disabled military veteran (she lost part of a leg fighting in Iraq) who had never considered a political career until the Democrats put her up to running for a congressional seat in the Chicago western suburbs in 2006.

SHE NARROWLY LOST that campaign to Rep. Peter Roskam, R-Ill. Her reward for enduring the campaign was her current job as Blagojevich’s top person in dealing with veterans’ issues. Now, he may move her “up and out” to Washington, in a much more prominent post than she would have got had she won in ’06.

Some might think Duckworth is not experienced enough to warrant consideration for a Senate seat. They might view this as yet another example of Blagojevich’s irresponsibility as governor.

Yet something about this appointment rings true – even for the cynical motivations that there would be a U.S. senator totally beholden to Blagojevich (something he wants at a time when Republicans and rural Democrats in Illinois are banding together with Chicago Democrat malcontents into an outspoken coalition that constantly denounces his every move).

Also, her personal story would make her instantly one of the most prominent members of the U.S. Senate (which likely would make the three-decade veterans of that chamber jealous). What Republican is going to have the nerve to attack a woman who suffered her injuries while piloting a military helicopter that was struck by a rocket-propelled grenade?

EDITOR’S NOTES: The secret’s out. Barack Obama is starting to try to figure out who he wants (http://thecaucus.blogs.nytimes.com/2008/05/22/obama-begins-search-for-vice-president/) to be his vice-presidential running mate. Republican challenger John McCain is also looking, but he’s not pretending that it’s a secret.

Tammy Duckworth in the U.S. Senate makes sense for Rod Blagojevich on certain levels, no matter how many (http://www.suntimes.com/news/sneed/964328,CST-NWS-SNEED22.article) longer-serving political people get their feelings hurt at being passed over. For those who don’t remember (http://www.chicagotribune.com/news/local/chi-0611100134nov10,1,3297221.story?coll=chi-news-hed), Duckworth is a military veteran who has not let her combat-caused disabilities prevent her from getting ahead in life.

Obama has a large lead over Hillary R. Clinton in the nationwide polls and a slim lead (http://www.gallup.com/poll/107467/Gallup-Daily-Obama-53-Clinton-42.aspx) over McCain, if the general election were to be held today. That makes this as good a time as any to start thinking of who will move “up and out” if an Obama presidency becomes a reality.
Posted by Gregory Tejeda at 12:01 AM