On the one hand, I want to praise Mayor Richard M. Daley for the comments he made Thursday while speaking at the city’s rally on behalf of immigration.

“Hizzoner Junior” acknowledged that Chicago is a city that was built up by immigrants, and that its co 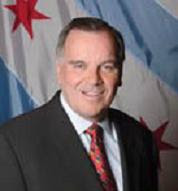 ntinued strength depends on newcomers to this country continuing to locate in the Second City, rather than in places like Houston, Los Angeles or Miami.

ON THE OTHER hand, the real story would be if Daley and other city officials did not publicly acknowledge the role of immigration to Chicago. It could very well be that Daley looks at simple arithmetic and sees that Chicago is a place where the Hispanic population is nearly as large as the white or black populations.

By the year 2020, it is expected to be just as large as either of those groups. The numbers demand that Daley not irk any segment of the population, particularly since he will want their votes come 2011 – when he likely will try to run for the term that potentially (if he wins and serves the entire term) would make him the longest-serving mayor ever in Chicago history.

So what was notable about Immigrant Rally III, Chicago-style?

A few thousand people marched from a West Side park to the public square outside the Dirksen and Kluczynski federal buildings. This year, because Chicago officials were fully aware that large numbers of people would participate, they were ready.

POLICE CLEARED A route for the marchers to follow, and Chicago Transit Authority bus routes were altered during the afternoon to prevent the possibility of a bus running over protesters (as much as that thought would likely please the nativist crowd).

The Chicago rally was one of dozens to take place in large cities with significant Hispanic populations. Likely, the one tidbit from Chicago that will warrant national attention was the participation of Saul Arellano, the U.S.-born boy whose mother, Elvira, was deported to Mexico last year after she sought sanctuary in a Humboldt Park neighborhood church for nearly a year.

Of course, he only gets a tidbit because all he really did was said “Si, Se Puede,” the slogan of United Farm Workers founder Cesar Chavez that roughly translates to “Yes, We Can” and is meant to be an “Up With People” type of saying to encourage people to do more with their lives.

In Chicago (and perhaps elsewhere in the country), activists who marched were determined to talk up the need for improved protections for the rights of Hispanic people, comparing them to other groups that often fight political battles for civil rights.

THAT IS A step forward for Latino activists, for as long as their fight consists of nothing more than marches, it becomes easy for political people to dismiss them. All too many people are going to cite the official crowd estimate of roughly 3,000 people who participated and compare it to the 300,000 or so who marched in 2006.

They will claim this is evidence that the Latinos themselves don’t really care about the issue. All it really means is that the marches themselves have the potential to become stale, and activists need to advance their fight if they wish to prevail.

Prevail they must, although I wonder at times why Latinos are still considered such an immigrant group in Chicago, considering that our origins here date back to the years just after World War I. We're not newcomers. Some of us (my family included) have been here three or four generations.

This is an important issue, as xenophobic elements of our society who have problems with the fact that the U.S. Hispanic population is growing (and is also moving to places besides California and Texas, such as in the southeast and northwest where Latinos previously never lived) are putting their own pressure on political people to impose laws they believe will somehow “force all those foreigners” out of the country.

THE REALITY IS that the Latino population is too large to ever be eliminated, but many people can suffer in the interim if these elements of society are allowed too loud a voice in public discourse.

So for those of you Chicagoans whose usual daily routine might have been disrupted (the crowd at the federal building kept you from walking your typical route through “the Loop” or your bus had to take a detour), relax.

The “delays” were for a good cause. Besides, the typical Chicago resident is of some ethnic background that makes it likely their parents or grandparents would have been the brunt of the same ridiculous criticism a generation or two ago.

Besides, the protesters gave so much advance notice (these marches have been in the works for months), that if you didn’t have enough sense to figure out an alternate route in advance, you deserve to be a little late for work.

EDITOR’S NOTES: Even the Rev. Jesse Jackson got into the act at Thursday’s immigration (http://cbs2chicago.com/local/immigration.rights.rally.2.713078.html) march and rally in Chicago.

A blast from the not-so-long-ago past, when Latino activists got hundreds of thousands of Hispanics and other immigrants to march through the streets of urban America (http://www.msnbc.msn.com/id/12578901/), forcing Anglo-America to realize that Latinos are a significant part of this country’s composition.
Posted by Gregory Tejeda at 12:03 AM