Rod Blagojevich has had his wife, Patti, at his side throughout his entire legal proceedings. Yet on Monday, he made a point of bringing his daughters to court.

They get to spend a day with Daddy, as attorneys for the prosecution and defense make their last-stand closing statements before the whole case gets thrown to a jury locked away in a back room somewhere until they reach a verdict.

TO ANSWER YOUR question, “yes,” people were aware those were his daughters, Amy and Annie. The Chicago News Cooperative used their website to report that the now-impeached governor made a point of introducing the girls to those people in the courtroom.

Some people are saying it is a cheap attempt to sway the jury. Others think it is somehow cruel and unusual to the kids themselves to be exposed to a courtroom where attorneys will be making a point of saying in graphic detail that their dad is a crook who belongs in prison.

My gut reaction, however, is to say this isn’t a new tactic. I have seen it used once before, albeit under nowhere near as drastic as circumstances.

What I’m referring to is an incident involving Pat Quinn, who back then was Illinois treasurer. Which means his now-grown sons were still kids.

BACK THEN, I was a reporter-type person for the now-defunct City News Bureau of Chicago, and one of my assignments that day was to show up at the WBBM-AM radio studios on McClurg Court, where Quinn was supposed to show up to tape the news radio station’s weekend interview program “At Issue.”

I forget exactly what the “controversy” was involving state government that made the treasurer’s office particularly relevant that week. But it meant that Quinn accepted the invitation to appear on that program knowing he was going to get grilled in the questioning, and that there would be people looking for him to slip up in the details so he could be accused of not being fully truthful with his answers. 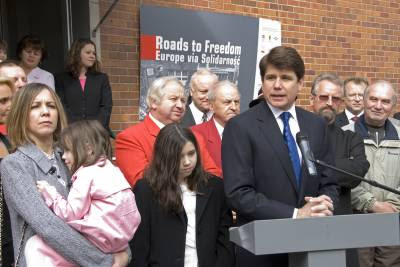 The Blagojevich daughters have been seen in public with their parents before, including this event back when Milorod was still governor. Photograph provided by Victims of Communism Memorial Foundation.

Maybe it really was coincidental that Quinn picked that exact date to have his sons with him, allowing them to see “Daddy” at work, while also getting to see the insides of a real live broadcast studio.

What I remember of the event was Quinn sitting those kids in a spot that was between himself and the questioning reporters on the program’s panel. I don’t remember any of the specific questions or answers (we are talking about 18 years ago), but I do remember the tone was rather mild.

AFTERWARD, I STILL remember one of the reporter-types who was part of the panel saying, “it’s hard to grill him when you got those boys looking doe-eyed at us.”

Is that the effect that Blagojevich was hoping to have by deciding that Monday was the day to bring Amy and Annie (the latter of whom, I believe, is only 7)? I almost hope I can have a chance to talk to those girls some two decades or so from now, just to get a sense of what memories they keep from Monday – or if they manage to blank out the entire day from their life’s memories.

Actually, I’d wonder who Blagojevich would be trying to sway. Does he want the prosecutors to ease up on the all-out attack they want to do – to make up for the fact that they didn’t get to do any cross examination of him on account of the fact that he didn’t testify on his own behalf? Or does he want the prosecutors to smack him about like a piñata in front of his daughters – out of some hope that the jurors will see the shock and fear in the girls’ eyes and feel some compassion for him?

For the record, prosecutors said in their closing statements that Blagojevich made claims that were “outright lies,” particularly when it comes to the former governor’s claims to maintain separation between government and campaign activities.

THEY DID, HOWEVER, try to clean up the obscene language that Blagojevich engaged in that was caught on tapes of FBI wiretaps of his telephone conversations. Of course, those of us following the trial have heard the “f---ing golden”-type comments so often that our minds fill in the foul language.

It could just be that Blagojevich wants the jury to see him with his wife and two young daughters to make them realize that there are people who care about him and who will be hurt if they reach a guilty verdict on so many charges that a lengthy prison term becomes mandatory?

Or maybe it truly is just that Blagojevich wants to expose his daughters to the ways of public policy and public service, and Monday truly was the best time for the girls to spare to sit in a courtroom on a hot July day at the Dirksen Building courthouse.