Daley “approval”: I don’t buy it 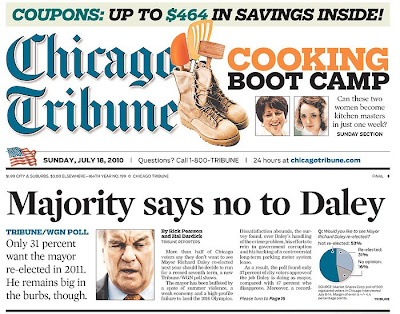 Will we be reminded of this headline again on May 4, 2011 (the city's next Inauguration Day?

Excuse me for being skeptical, but I spent the weekend wondering if the Chicago Tribune had come up with a front page this weekend that would be remembered alongside “Dewey Defeats Truman” and the day that the newpaper prematurely obituaried long-time Alderman Vito Marzullo.

“Majority says no to Daley” was the banner headline put atop the lead story, which told of a poll the newspaper commissioned for itself and WGN-TV news to write about, saying that Mayor Richard M. Daley is vulnerable politically as we approach the 2011 municipal elections.

AS THE NEWSPAPER reported, only 37 percent of those surveyed approve of the job the mayor is doing these days. Only 31 percent are willing to say they want Daley to get re-elected next year.

Admittedly, that is not as bad as the 22 percent final approval rating George W. Bush got when he left the presidency last year. It is nowhere near as bad as the 13 percent approval rating that the same Chicago Tribune gave to Rod Blagojevich – and which we got to hear Blagojevich himself mock on all those audio tapes the U.S. attorney’s office used as evidence against the former governor during his corruption trial.

But still, having potentially only one-third of the people in support of you is not a sign of great confidence – even if the number of people who “disapprove” of Daley is also below a majority (47 percent, to be exact) and that same poll says 16 percent of people have “no opinion” on the question of whether Daley should be re-elected as mayor.

Yet like I wrote at the beginning of this commentary, I’m skeptical of the thought that people in this city are somehow on the verge of dumping Daley. They may joke about it, or make cynical comments at moments when something is going wrong.

BUT I BELIEVE that when all is said and done, next year a lot of people who gave a negative response to this survey will wind up making a knee-jerk reaction in the voting booth – and casting their ballot in a way that ensures Daley the younger gets to extend his time working in his father’s old office on the fifth floor of City Hall.

As far as Daley is concerned, I fully expect him to die in office just like his father (although not literally in his office, such as was the fate of former Mayor Harold Washington). My sense is that the man wouldn’t know what to do with himself it he weren’t in the political post he has held since 1989 (when he won the special election to replace interim Mayor Eugene Sawyer). In the Tribune’s story, he talks of still having the “passion” for the position.

Perhaps it is a sign of my age and that I had already reached adulthood by that time, but I can envision Chicago someday with someone other than a Daley as mayor – although I wonder if it will be a Vanecko or a Thompson, or any of the other surnames of assorted cousins who can trace their family roots back to Richard J. Daley.

What I can’t consider is Richard M. departing us now, mainly because I don’t see any significant challengers in the current political ranks.

SOME PEOPLE LIKE to toss out the name of Sandi Jackson, the alderman from the seventh ward who is married to Rep. Jesse Jackson, Jr., D-Ill., (just envision a local political dynasty tracing back to the Rev. Jesse Jackson) while others think that Ald. Joe Moore of the 49th Ward has a big enough ego to think he can challenge Daley.

Yet Moore himself has said he will run for re-election next year to his City Council seat from the far North Side. Too many names tossed about have appeal limited to specific segments of the city. While I personally could see Cook County Sheriff Tom Dart having the ego sufficient enough to think he could be mayor, even he has said he will not take on Daley in '11.

If anything, the reason that the political speculation about Rahm Emanuel giving up his post as White House chief of staff to move back to Chicago to run for mayor has been given as much credibililty as it has is because there just isn’t anyone else to consider. Yet even Emanuel says his mayoral dreams will wait until Daley voluntarily departs elective office.

At this point, I’d have to say Daley will have nothing more than token opposition in the bipartisan elections that will take Feb. 22, 2011 (with runoffs scheduled for April 5, if necessary), which would make it just like all the other mayoral elections of recent years. The website Our Campaigns predicts Daley to have a 99.68 percent chance of winning re-election.

THAT WEBSITE MIGHT be far from scientific, but I think it reflects reality a bit better than this latest poll. In fact, I can’t help but think this latest poll is merely a reflection of the mood the country is in with regard to electoral politics.

Many people these days are willing to say “no” or think “no” and are just giving a knee-jerk reaction now to an election that is almost a year away. It’s not even the next election.

I almost expect many people who are ideologically inclined to do so to take out their bashing of Democrats in the Nov. 2 elections. Which means that an election cycle that affects solely the city of Chicago in 2011 will be a whole new set of circumstances. I’d go so far as to say any poll taken now is irrelevant.