Could we someday see a broke Playboy?

Chicago’s own Hugh Hefner (who hasn’t actually lived in Chicago for nearly four decades, if you want to be exact) managed to work his way into the news on Monday. He wants to “buy” Playboy.

The man who founded the magazine (the first issue supposedly was put together on the kitchen table of his then-Hyde Park apartment) and turned it into an iconic brand that Chicagoans like to brag about whenever it suits our public image desires is determined to ensure that the company that has evolved from his brand name lives on – regardless of how much longer he may have to go.

Now why should Hefner, whose official title is editor in chief and chief creative officer, have to buy what he created?

It’s like everything else when it comes to media companies. The trend back in the 1970s was to turn to Wall Street. Go public. Take advantage of the potential for huge revenue streams that can come from having stock traded publicly. People who buy in and cash out at the proper time can become very wealthy.

Look at Hefner. He is a wealthy man and the company has to be taking in serious amounts of money to maintain that suburban-Los Angeles mansion and the constant parties that perennially take place there on assorted cable television shows.

THE PROBLEM WITH “going public,” however, is that one becomes susceptible to fulfilling the whims of Wall Street – which have very little interest in the actual product.

Shareholders buy stock because they want it to continually go up. When it doesn’t, they become upset. The concept that there are up and down quarters in the operation of any business is not one of interest to stockholders. 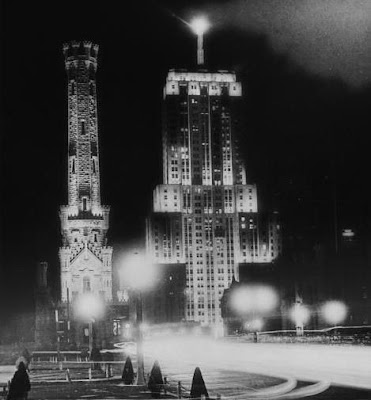 The idea of Playboy controlled exclusively by Hugh Hefner brings to mind the days when the magazine was published from the former (and now once-again) Palmolive Building. Does Hefner know something that could pull off this idea? Or is the long-term fate of the company as dead as the one-time Bunny Beacon? Photograph provided by American Architecture.

Thinking about it that way, it makes Wall Street sound like organized crime, at least as described by the “Henry Hill” character in the 1990 film “Goodfellas.” Businessmen who get pressured into taking on the mob as a partner now have a financial obligation to meet, and the mob isn’t interested in anyone’s problems.

THE SIMPLE FACT is that the “stockholders” ultimately don’t care about the long-term fate of the company, because when things get really bad, they will hope to have sold out long before and made a nice profit. Some people who invest even take on the attitude that nothing is meant to last forever – and that everything must come to an end.

Even Playboy magazine, and all the merchandise that attracts people because it carries that “bunny” logo (which company officials admit is probably worth more than the magazine itself).

It would seem that Hugh Hefner is sick of being told “(Obscenity) you, pay me.” Which is why Playboy Enterprises issued a statement Monday saying that company founder Hefner told the Board of Directors that he wants to buy all the outstanding shares of common stock that he does not currently own.

According to a statement issued by the company, there are two classes of common stock, and Hefner currently owns 69.5 percent of one class and 27.7 percent of the other. In short, Hefner is going to have to be willing to risk a good chunk of his wealth in order to get back control of the company.

IN SHORT, HE wants to make one big payoff now so that he can get rid of all those people who aren’t devoted to the concept of keeping alive the magazine that some view as a symbol of sexual liberation, and others think of as an essential part of wet dreams (I still remember the scene from the film “Animal House,” where the Homecoming Parade is disrupted and a girl dressed as a Playboy bunny is flung from a float, through an open window, and onto the bed of a young boy reading a Playboy magazine).

To that end, Hefner is talking with financiers, who presumably would find some way of putting up that much money to buy back all that stock.

Does this mean Hefner is risking putting himself in so much debt just so he can claim to be the sole owner of Playboy that he’s risking bankrupting himself? If the thought of Playboy going bankrupt sounds absurd, just think, who would ever have thought the Tribune Co. would have to declare bankruptcy?

I’m sure financial experts, particularly those being paid by Playboy Enterprises, will claim I am oversimplifying my explanation of what Hefner has in mind, and that there are elements of the deal that will reduce Hefner’s financial risk.

BUT I CAN’T believe any deal would eliminate it, which means it sounds like Hefner is making the same move that many newspaper companies did in recent years by continually buying more properties and expanding – thereby creating so much debt that they now owe more money than their publications are taking in during this current period of economic struggles.

Some newspapers have had to cease operations as a result. Could this ego-driven business move have the same ending for Hefner’s magazine (which no matter how much they want to boast has an image that sells merchandise in China is the item that props up the whole company).

Would anyone buy a “bunny” logo sweatshirt if not for an association with the centerfold?

I’d hate to think of the sight someday of an auction at the Playboy Mansion, with all of its contents and the property itself being put up for the highest bidder (would the Gucciones show up just for kicks) to try to repay some of the debt incurred just because Hefner has dreams of once again being the sole boss – just like the days when he lived and worked out of the Near North Side.