I kind of felt sorry on Sunday for John Scott.

He was an outfielder in professional baseball who, in a sense, made it to the top of his profession. He has three lines of type in 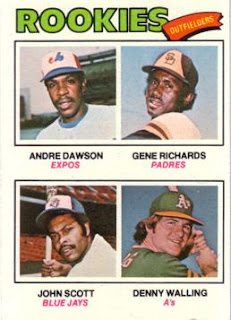 Baseball Encyclopedias indicating he played parts of two seasons with the San Diego Padres and one year with the Toronto Blue Jays back in the team’s first year of existence in 1977.

HE WILL FOREVER be able to say he was a major league baseball player, and I realize there are many people who would desperately have liked to have made that claim – but cannot.

Yet on Sunday, when Andre Dawson was giving his acceptance speech upon becoming a member of the Baseball Hall of Fame in Cooperstown, N.Y., Scott was, well, who knows? He hasn’t done much that has attracted public attention (which can be positive in that he hasn’t seriously screwed anything up) since leaving baseball (where he is a career .222 hitter who managed all of two home runs in his career).

What ties the two men together is that staple of memorabilia – baseball cards. The set issued by Topps Chewing Gum for 1977 includes card number 473, which depicts four rookies all of whom have that fresh-faced look of a full life of baseball glory ahead of them.

One of them is Dawson, who is the reason this card has a book value of $20 (compared to the perhaps $0.50 it would command if it didn’t have a Hall of Fame player on it). Another is Scott.

WHAT IT AMOUNTS to is that the highlight of Scott’s baseball career could literally become that he once had his picture put on the same piece of cardboard as the man who went on to become the Hawk to a generation of North Siders (Sout’ Siders know who “The Hawk” really is).

While Dawson went on to play baseball into the 1990s and is beloved to certain Cubs fans, how many Blue Jays fans except for the most hard-core remember the man who was a part of their team’s original ballclub?

While Dawson managed to get himself immortalized, Scott’s career ended at age 26 in 1978, when his attempt to stick in baseball with the Springfield Redbirds of the old American Association produced a .281 batting average, 50 stolen bases – and no interest by the parent club St. Louis Cardinals in promoting him back to the major league roster.

His claim to fame in Blue Jays history? He was the lead-off Blue Jays batter in their first game ever, on April 7, 1977 against the Chicago White Sox (the game that was played even though it snowed heavily throughout). He was struck out by pitcher Ken Brett.

BOTH DAWSON AND Scott were equals, in a sense, back in the spring of ’77, as they had hopes of lengthy careers playing baseball in Canada. Dawson made the trip players dream about that ends in Cooperstown. Scott took the trip that occurs much more often, struggling (and failing) to stay in baseball while playing in Springfield, Ill., the very next season.

I wonder if he has any memories of the capital city, or of eating a “horseshoe?”

For his sake, I hope his life has turned out well, post-baseball. At the very least, the value of his baseball card just shot up significantly – all due to Dawson.