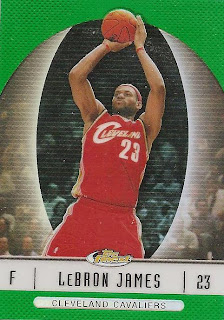 This is going to be a sacreligious thought for some. But I didn’t care enough about where LeBron James wound up to want to watch ESPN’s hour-long stint of prostitution where they let the now-former Cleveland Cavaliers forward announce which basketball team he was going to bless with his presence for the next few years.

In fact, I’m glad that when the World Cup final is played Sunday, there will be so many alternatives that I can avoid paying attention to the television network that would like to think it is reporting on sports, but is really making athletics all the more trivial.

A PART OF me wants to start boycotting anything having to do with ESPN on account of the way they so willingly gave up their airtime for this nonsense. I’m sure they think they scored a “scoop” and will try to dismiss people like me as merely being bitter that we didn’t get the story first.

Yet treating this self-indulgent trite trash as something ever so significant makes me want to puke – especially since too many people think that ESPN is somehow the significant news media entity, rather than just another infotainment channel among the hundreds that many of us can access on our cable television packages.

Which means the people who might be the most sane are the ones who are willing to put up with the “luddite” label and get their television signals over the airwaves.

Now in a sense, I don’t blame LeBron James. He’s a ballplayer, and he has an ego like many professional athletes. I expect him to pull ego-centric silliness such as he has conducted the past week to turn himself into a presence that must be catered to.

MY PROBLEM IS with people who are too willing to play along with that, instead of doing our best to try to knock down the hype and try to report on whether or not there truly is any benefit to having LeBron James in ones’ line-up.

With James and the other players the Miami Heat (the stupidest franchise name in professional sports, even moreso than the Utah Jazz or the Tampa Bay Rays) picked up in recent days (including Chicago-area native Dwyane Wade), that team had better win something.

They had better make a clean break from their history of nothingness and start to amount to something as a sports franchise. Or else James is going to find that he’s the biggest bum in all of pro sports (he’s going to make Alex Rodriguez appear to be well-loved).

He dumped on his home town of Cleveland, and managed to string along the franchises of the major cities of this country. He’s going to have a lot of people hoping that his career fizzles into a pile of dog-do.

WHAT CRACKS ME up is that much of the early speculation saw the free agent battle for James’ services as a good ol’ Chicago vs. New York brawl. Some even put Los Angeles into the equation.

But this was supposed to be about what metropolis would turn James into the symbol of their city for the upcoming decade.

Instead, it truly seems that this was nothing more than a Cleveland vs. Miami battle, with the big cities (including our own) strung along to feed his ego.

I’m not shocked that James could ignore all those people who behaved as though they were Chicago Cubs fans (don’t any of these people have jobs?), carrying those black signs reading “home!” and trying to create an almost intimidating presence to keep the one-time Cleveland-area high school prep star with his hometown NBA franchise.

Instead, James gave up the hometown memories for nice weather, which as far as I’m concerned is about the only real difference between Cleveland and Miami (unless one wants to factor in the lack of Cubanos in Cleveland).

SOME WILL CLAIM that it was the chance to create a “super team” with Wade and Chris Bosh that could win something in Miami. Yet I’m wondering if they could produce a lot of teams that fall just short.

Perhaps it is because I have seen too many baseball teams that think they can buy their way to a championship. It is true that a team can usually spend money to get that final remaining part to a team that actually wins something.

But thinking that they can go on a checkbook spree this week to suddenly make Miami an elite NBA franchise? That’s nonsense. They could wind up being the best second-place team in the league, or the one that consistently gets knocked out of the playoffs in the early rounds.

But maybe James will be entranced by the flash of Florida, which depending on the type of person one is can be more appealing than anything coming from the Big Apple or the Second City. Why do I suspect that if the NBA had a team in Las Vegas, that would have been the preference of LeBron, and just about every other ballplayer on the planet today.

BESIDES, I STILL wonder if Chicago sporting luck would have had its way with James and brought down his talent?

In which case, the Chicago sporting scene is better off without the additional disappointment. The Cubs will give us enough of that in coming years.