Blagojevich did us a favor by shutting up, even though some don’t appreciate it 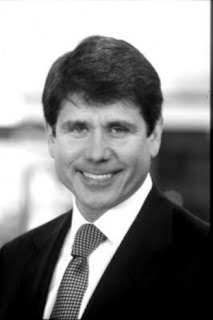 I couldn’t help but breathe a sigh of relief when it became official Wednesday that Rod Blagojevich is NOT going to blather on for days, if not weeks, on end, trying to justify himself as a noble public official – rather than just a government geek who got where he did because of his father-in-law.

In fact, we may have heard the most honest thing we will ever hear come from the mouth of a public official when he told reporter-types at the Dirksen Building courthouse, “maybe the biggest lesson I’ve learned is that I talk too much.”

THE IDEA OF a politician piping down is something we ought to be thankful for – even though the tone of much of the punditry about Blagojevich’s criminal trial these days is that he somehow owed us his testimony.

That idea was based on all the boasting that Blagojevich did throughout the months leading up to this trial claiming that he wanted a chance to “tell” his own story so as to convince the public of his innocence of any criminal behavior.

It was pleasant to know that the Republican research teams doing work for the various GOP candidates will have to dig elsewhere, rather than just write down the words Blagojevich said on the stand in their efforts to dig up dirt on Democrats who nominally were the former governor’s political allies (but in reality were more pleased than Republican legislators when he was impeached and removed from office over a year ago).

Because that would have been one of the few benefits to actually having Milorod on the stand during his trial.

SO WE SHOULD thank the defense attorneys who talked Blagojevich into not testifying – and give a coscorron a la cabeza (a smack to the head, for those who don’t habla Español) to the one defense attorney who said he wanted Milorod to testify.

Now I will go so far as to make this prediction. While I think there is some legitimate thought to the idea that the prosecution did not prove its case against Blagojevich, I don’t think that matters.

I expect Rod Blagojevich to be found guilty of all counts in the case before him. If this jury feels any compassion, it will be in terms of determining the fate of brother Robert. They may feel he was an un-political rube who got thrown in way over his head, and shouldn’t have his life ruined because of his younger brother.

Then again, the contempt factor for Rod may be so intense that it will take down everything in its path – even Rob, who amused me when he admitted during his testimony that he still considers himself to be a Republican. That will be one fact the GOP “attack dogs” will ignore.

THERE ALSO IS the fact that U.S. District Judge James Zagel is determined to set the rules that the jury must follow in ways that ensure they disregard many of Blagojevich’s claims.

How else to explain Zagel’s comments outside of the earshot of jurors when he compared one-time first lady Patti Blagojevich to a pair of madams from 19th Century Chicago, and his comments about how conspiracies can be just words (since Blagojevich’s attorneys have tried saying that much of the political trash talk caught on FBI tapes was merely speculation that never occurred, and the former governor himself describing it as “brainstorming ideas”)?

As Zagel put it (and was reported by the Chicago Tribune), “you can have a conspiracy entered into with fools and bumblers, and it’s still a conspiracy.”

“Fool” and “bumbler” are probably the nicer words that people would use to describe Blagojevich these days. Is that what we really would have wanted to hear coming from the witness stand for the next few days?

I HONESTLY BELIEVE that if Blagojevich has a chance at having his name cleared in a strictly legal sense (the bulk of Illinoisans are going to think that Rod is skuzzy, regardless of the jury’s eventual verdict), it is going to come in the appeals courts.

Blagojevich could wind up suffering the same fate as former Gov. George Ryan, whose appeals up to the Supreme Court of the United States were unsuccessful – despite the firm belief of dissenting justices who think that Ryan’s behavior wasn’t criminal.

But it likely would be there that we will learn whether Zagel’s rigid control over what could or could not be said in court was truly an attempt to keep Blagojevich from turning the trial into a circus, or merely a judge leaning too far to benefit the prosecution

SHOULD BLAGOJEVICH SOMEDAY have his name cleared, I would envision him spending the rest of his days on this Earth blathering on and on about how he was victimized – similar to how I now expect former newspaper magnate (and Chicago Sun-Times owner) Conrad Black to behave, now that he has been granted bond to be free from prison while his criminal appeals are pending.

True justice would be to lock the two of them in a room together and let them suffer from each other’s over-bloated egos.