Who gets mass transit perks?

It’s not much of a secret that mass transit on the city’s South Side is set up a little more awkwardly than it is up north. 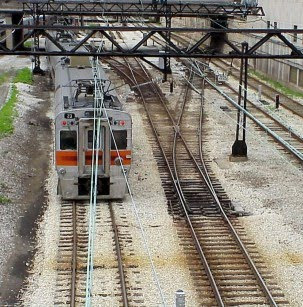 These are the Indiana commuter trains that could, but can't, pick up South Side residents. Photograph provided by State of Illinois.

I’D ARGUE THAT if they were true urban sophisticates, they’d live a stint on the South Side, and try to figure out how to navigate around the city in the section where commuter train service isn’t as expansive.

There are those to whom mass transit is “the bus’ and all those transfers that make truly lengthy trips across the city seriously inconvenient. It also creates people who reside in certain neighborhoods into those who rarely leave the neighborhood because going anywhere is such a pain in the butt.

It probably isn’t an accident that many of those most isolated neighborhoods are African-American in population. Not that I need to come out and say there is some sort of racial motive at work. I don’t have to because there are plenty of other people who will do so.

Just this week alone, the Chicago Tribune reported about a lawsuit being filed in U.S. District Court that contends the Regional Transportation Authority’s methods for splitting up state funding for mass transit programs is biased in favor of the suburban-dominant Metra commuter trains and against the Chicago Transit Authority that handles the buses and “el” trains in the city.

THE NEWSPAPER ALSO reported about a new activist group that wants increased transit service on the South Side, and is hoping to use the South Shore Railroad commuter trains to their benefit.

Those trains are the ones that connect South Bend, Ind., to Hammond, then have their trains pass through the South Side en route to their final destination – the Randolph Street station at Michigan Avenue.

Those trains, by agreement of the transit authorities in both states, don’t make stops at stations in the city neighborhoods, even though they share tracks and pass by stations used by the Metra Electric commuter train system that connnects southern Cook County to downtown Chicago.

In short, there are those who want more commuter train service through the South Side, because there are limitations as to how effective bus service can be – particularly since they’re making stops every couple of blocks or so and have too much of a knack of getting backed up during peak traffic times.

SO I CAN understand the reason that these activists are upset and why some people feel compelled to file lawsuits claiming that Metra is getting too much money.

The problem, however, is going to be to convince political people that there is any truth to that concept.

I can recall being a reporter-type person covering political debates that devolved into arguments about mass transit – usually because there were those who believed that it was the Chicago Transit Authority that got “too much” money and that it was the suburban services that ought to be receiving more.

Admittedly, the political partisan atmosphere has changed since those days to favor the city’s interests. But there are still going to be a significant number of government officials who will blatantly resist any attempt to make changes in favor of the South Side activists.

THE BIG FACTOR is just the cultural difference in the way mass transit is viewed between urban and suburban residents.

The latter account for about two-thirds of the people of the Chicago metropolitan area. But it is the CTA that gets nearly 90 percent of all the funding provided by the state for mass transit programs, with the bulk of the remainder going to the Metra commuter trains that connect various suburbs to downtown Chicago.

The actual amount that goes to Pace, the suburban bus entity, is so miniscule that that is the sole reason while suburban bus lines run so infrequently and are non-existent in certain parts of the Chicago area.

Those percentages are justified by officials on the grounds that it is city residents who make up the bulk of mass transit users. Yet it also is those same city residents who are using a system that in portions is more than a century old.

STATE SEN. KWAME Raoul, D-Chicago, (whose home neighborhood of Hyde Park has no CTA “el” trains running through it, but has some Metra Electric line trains that pass by) is sponsoring a bill in Springfield that, while it has little chance of passing, may persuade transportation officials to discuss the issue seriously to avoid having some sort of government intervention on the issue.

I have no doubt that the activists are absolutely correct when they argue that the mass transit service in their respective neighborhoods is in need of a serious upgrade. Yet this might very well turn into one of those issues where everybody agrees there is a problem, but no one is willing to do much about it because of the cost. For as much as the CTA needs a cash influx to improve (cost-cutting only means a reduction in service, which exacerbates the problems rather than resolving them), I have no doubt that Metra trains also need more finances in order to be maintained.

Reading about the federal court lawsuit, I got my 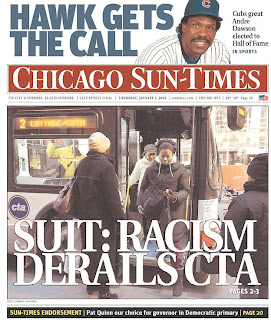 chuckle when I read that Metra trains were “mass transit luxury.” I don’t remember anything particularly luxurious about a Metra train the last time I rode one (I occasionally use the Rock Island line Metra trains that run from Joliet to the Southwest Side, then to downtown).

In fact, I can think of CTA “el” trains that were cleaner. Then again, I probably was using a Red Line train to get to some North Side destination at the time.

EDITOR’S NOTES: The federal courts in Chicago and the Statehouse in Springfield are being asked (http://www.chicagobreakingnews.com/2010/01/minorities-cheated-on-public-transit-funding-suit-says.html) to ponder (http://www.chicagotribune.com/news/chi-metra-southshorejan04,0,2377858.story) whether the problem of lesser quality mass transit service on the South Side is a coincidence, or some sort of legal catastrophe.
Posted by Gregory Tejeda at 12:01 AM

I'm not stating whether or not there is inequality, but the fact that the south shore trains don't permit people in Hyde Park to commute downtown does not is not evidence of it. The Metra Electric, which runs along adjacent track, does serve Hyde Park-downtown commuters and runs at least as frequently as north side-north suburban commuter rail lines. Hyde Park is not a good example of an underserved neighborhood. Though the two nearby el lines don't run through the neighborhood, each are a short bus ride away along one of several main streets (63rd, 55th, 51st, 47th). The same is true for many neighborhoods all over the city-- not everywhere is there an el line. Think of Sauganash, West Ridge, far southwest side neighborhoods, etc. All these place require a bus to get to an el stop. Go look into who was the moving force behind the demolition of a section of the Green Line running through the low-income majority black neighborhood of Woodlawn.

None of the mass transit agencys keep track of the race of the riders that use thier service. The numbers cited in the law suit are made up or guesses. The racial make up of city nieghborhoods changes. Many so called minority areas were white when the El lines and othe mass transit was being planned. The city and state woefully underfund mass transit but I dont think race is the problem.