A Pulitzer for the Enquirer? Nah!

It seems in recent days that we’re reliving the fact that former Sen. John Edwards of North Carolina, who had 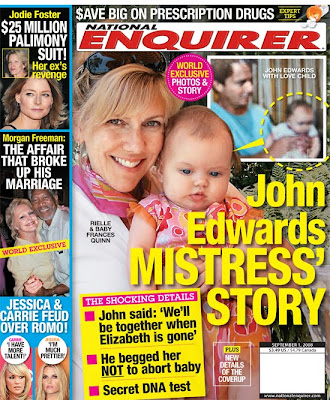 his own political aspirations to become president, is an adulturer.

His mistress became pregnant with his kid (a fact he now admits to). His wife has left him. As recently as Thursday, CNN got excited over the fact that there is an Edwards “sex tape” of him engaging in coitus with the woman who now is mother to his newest child.

WE HAVE HAD some self-righteous hissy fits from the editors of the National Enquirer claiming they ought to receive a Pulitzer Prize because (they claim) they were the first publication to put any effort into nailing down the story that Edwards was not someone who fit the stereotype of a dutiful family man.

The Enquirer does not expect to receive that Pulitzer. Their fits are more along the line of trying to stir up resentment against an establishment that will not recognize them for their achievement.

So part of what I’m trying to accomplish with this particular commentary is to knock back any attempt to stir up resentment. Because as far as I’m concerned, I don’t care about this story anymore.

Not that I ever really cared about it, since it was clear early on in the 2008 election cycle that Edwards was going to be a long-shot for those presidential aspirations. How many people seriously remember anything from that year other than the Obama/Clinton brawls that resulted? Personally, Bill Richardson’s lame presidential campaign made more of an impression on me than did Edwards.

CONSIDERING THAT EDWARDS is no longer a public official, I don’t care about hearing continued details. At least not in any sense that those details are informing us for the good of the public.

This has devolved down to the level of tawdry trash. And while the reporter-type person in me appreciates fully that tawdry trash can be news and does help to provide offbeat, interesting copy, the trick is to keep in mind that it ultimately is secondary.

It should not be allowed to prevail in a news report – which ultimately is the problem with many news reports of the early 21st Century.

It’s not a liberal news media. It’s a trivial news media. The more pointless a story is (it seems at times), the bigger play it will get.

SO I WOULD hope that most people would have enough sense to realize that the National Enquirer’s rants about not being taken seriously for a Pulitzer Prize are little more than self-serving rants. An egomaniac who is upset because the people around him have enough sense to ignore him.

Now I know that some people are going to argue that the fact Edwards was once a presidential aspirant who liked to play around sexually is a sign of a character flaw – something that the public ought to have known about before his name could appear on a presidential ballot (he got as close as being John Kerry’s running mate in 2004).

Some others will claim that such sexual daliances rise to the level of corruption if the public official uses the perks of his public position to help promote his affairs (the mistress gets a government job or the official uses government funds meant for legitimate travel expenses to pay for trips that turn into sex romps).

I sort of agree with the latter, but think the people who peddle the former theory are usually talking a load of trash they really don’t agree with.

BECAUSE MANY PEOPLE, when they read or hear these “sex affair” stories, don’t really get worked up over such esoteric concepts. They just want to see pictures of the “other woman,” usually so they can make some judgment call (some thought along the line of, “he cheated on his wife for that skank?”) about the official.

The thought of a “sex” tape feeds into the thought that what matters about such incidents is the tawdryness of the moment. Just think of how absurd the situation would have become in 1998 if we had learned of a videotape involving then-President Clinton and intern Monica Lewinsky.

At least when I heard of the Edwards sex tape on Thursday, it was on CNN Headline News’ “Showbiz Tonight,” which struck me as an appropriate place for the story (which turns out to be that someone found the tape in the trash broken into pieces, but managed to put it back together).

It fit in with all the other trivial celebrity tidbits that really don’t amount to much (and half the time aren’t even really interesting, I don’t care about anything related to Kim Kardashian or her family). I don’t see anybody suggesting that CNN get a Peabody award for their Edwards work.

THE NEWS PROFESSIONAL in me realizes that whoever does wind up winning a Pulitzer Prize when those awards for the news business are announced in April at Columbia University will have done so for a story that is of far more significance to the public than whether Edwards violated his marriage vows (which is a fact that is only relevant to his now ex-wife Elizabeth).

There’s also the fact that a North Carolina television station likes to claim it is the one that “broke” the story that Edwards was not fully faithful in his marriage. I’m not going to get into a debate over who deserves credit for “breaking” this story. The Enquirer may very well deserve full credit for this.

But at a time when we have serious economic troubles and have to wonder how much the partisan political infighting between Barack Obama’s supporters and opponents in Congress will delay the finding of a solution, there are more important issues to worry about than an affair.

For those people who would claim otherwise, I’d argue they are a significant part of the problem with our society.

EDITOR’S NOTES: Some people are misguided enough to see a significance to the work of the National Enquirer (http://www.politicsdaily.com/2010/01/09/does-the-national-enquirer-deserve-a-pulitzer-for-breaking-the-j/) when it comes to the behavior of John Edwards.

WRAL-TV in Raleigh, N.C., is claiming a significant “scoop” because they say they were the first to report that Edwards (http://www.wral.com/news/local/politics/story/5791651/) was about to admit paternity of a child out of marriage.
Posted by Gregory Tejeda at 12:01 AM