Emanuel for mayor? I doubt it 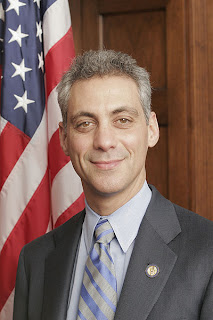 rs of the administration. So it isn’t out of the realm of possibility to speculate on what will become of the man.

That is what has led to conspiracy theories about how he is trying to rig the political future so he can return someday to Congress (he used to talk about how he’d like to be House speaker someday – which would be a first from Chicago).

THERE ALSO HAVE been those who think the north suburban native who turned himself into a North Sider to serve in Congress would envision himself as governor of Illinois someday.

But now, those Emanuel conspiracy theories appear to have reached into yet another branch of government. Sally Quinn, the one-time society writer for the Washington Post who continues to write occasional columns for the newspaper, published a piece of commentary Tuesday that hints Rahm thinks of himself as a future mayor of Chicago.

It would seem that the people with little better to do than guess what political fantasies Emanuel might have for himself are putting him all over the place. Could it be a series of trial balloons, whereby he runs for whichever office people are the least repulsed by.

If that’s the case, he won’t be running for anything at City Hall – particularly if Richard M. Daley decides to seek another term (at this point, I believe he will) in the 2011 municipal elections. Nobody will have the nerve to challenge Daley, no matter how much his naysayers want to think that thinks like parking meters or the Olympics debacle will "take him down."

BECAUSE I REMEMBER the revulsion level that Emanuel created in his congressional district when he first ran for the House of Representatives’ post from the Northwest Side. That, combined with the certain level of mistrust of any Washington official that people in other parts of the city will feel make me think that Rahm would be beatable if he were delusional to actually run for mayor in 2011.

The fact is that our local people who run for offices in Washington are considered to have run “up and out,” meaning they may be moving on to something that technically outranks City Hall but is part of another system altogether.

Meaning the local powers-that-be are more than willing to indulge Emanuel’s ego, so long as he applies it elsewhere. Let the District of Columbia deal with him, they think.

If he tries to come back to Chicago and exert such an attitude, there will be any number of politicos willing to dredge up the dirt.

IT WAS THE reason why I always thought it ridiculous that people used to say that Obama himself would someday run for Illinois governor if he had lost to Hillary R. Clinton in the 2008 primary. He too was another “up and outer” who left the Chicago delegation of the Statehouse Scene in order to be a part of Capitol Hill.

Am I saying that Washington and the federal government is another world? Yes. Am I also saying that the people who go there often are cutting themselves off from the local affairs? Yes.

Some might cite Roman Pucinski as a case of a member of Congress who became a local official. He gave up his House seat (a portion of his district was later represented by Emanuel) to be a City Council member.

But the fact that he is one of the few and that that took place decades ago shows just how unlikely it is that someone so engrained in the ways of the White House and Congress (let’s not forget Emanuel’s years of service under former President Bill Clinton that were so tight that Rahm was one of the last Democrats from Illinois to publicly side with Obama during the ’08 primary) could make the switch back to the fifth floor of City Hall.

THE VERY FACT that Quinn threw her Emanuel “nugget” into the middle of a lengthy diatribe about another issue (Desiree Rogers should be fired for letting those dingbats sneak into the state dinner for India) shows that it is not a fully-developed idea.

While I’m not trying to bad-mouth Quinn (who has been an observer of the federal government scene for several decades), I don’t expect her to be a master of the ways of City Hall. So I’ll give her the benefit of the doubt that she doesn’t fully appreciate how ridiculous an idea it is that Emanuel could ever return to Chicago on the local level.

You might as well say that Obama himself is going to come back to Chicago after he’s done being president to run for mayor. About the only local post I could envision Obama holding someday would be University of Chicago chancellor.

That is, if he doesn’t start thinking of Chicago as a place from which he came, rather than the place for which he is intended to return. USA Today earlier this week reported on many local business officials who wish Obama would take a closer interest in the city to help bolster their economic interests.

THAT IS WHY I always had the easiest time envisioning Emanuel thinking of himself as a future House speaker. I realize the man has (even by government official standards) a bloated ego. He’s going to want something for his own right someday.

And dreaming of the day in which he could be the guy that a president has to turn to in order to get things approved by Congress likely would satisfy him. Unless he dreams of the day that a Republican is president and he can be the House speaker who thwarts that official’s ideological desires.

EDITOR’S NOTES: Sally Quinn is dribbling political daydreams in her attempt to get Desiree Rogers to (http://www.washingtonpost.com/wp-dyn/content/article/2010/01/04/AR2010010402722.html?sub=AR) take the blame for lax White House security procedures.

Do you believe we will have to wait for Daley to deciede on his own to retire or is their anyone out there who has a chance to beat him.