EXTRA: Were Chicago and Illinois the point of Ground Zero for baseball fraud? 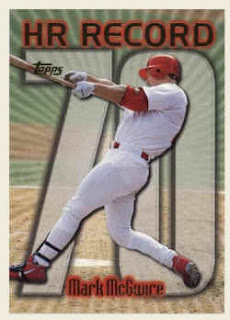 dates” about the home runs being hit by Sammy Sosa and Mark McGwire.

It was a mixture of cheers and boos that came from the crowd, some of whom resented the way that Chicago Cubs fans tried to spin Sosa’s performance as some sort of imperical evidence that the White Sox were irrelevant to the city.

AFTER ALL, IT was the Cubs (they would claim) that were giving baseball its “big” story and helping to “save baseball” from the public relations mess it incurred from the strike of 1994-95 (the one that now-Supreme Court Justice Sonia Sotomayor ultimately ended in her New York courtroom).

So you have to excuse me if a part of my reaction to learning that McGwire is now admitting to what was long suspected (his strength came from chemical substances that are considered inappropriate to the mentality of true sportsmanship and athleticism) is to chuckle at the thought that the Cubs were ever deluded enough to think they were that important.

After all, McGwire now admits it and baseball officials in 2003 had a drug test that Sosa himself passed. The one time that he needed to fail, he didn’t.

I find it ironic that many of the self-appointed guardians of baseball of today who want the harshest, most punitive punishment for Sosa and McGwire sound a lot like White Sox fans circa '98.

WHAT ALSO STICKS in my mind is that in the Summer of ’98, I was living and working in Springfield, Ill., which meant I was more or less on the dividing line between Cubs fandom and St. Louis Cardinals fandom. (For some reason, downstate Illinois residents are mostly too ignorant to appreciate the superiority of the American League).

Every single moment that season got the locals all worked up because it was taken personal. There was none of this “I wish they could both break the record” sentiment. Everybody wanted their team’s guy to win, and the other to be humiliated.

But now that we have to recognize that it all was a fraud, what should we think of that season – and of baseball.

I have been one of those people who does not get as worked up over steroids because I figure the ballplayers who are taking them are doing more potential harm to their bodies and their health than any humiliation they might suffer from my heaping indignation upon them.

IN SHORT, THEY will get theirs some day. And I’m sure Sp 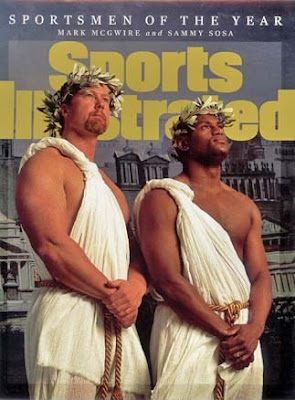 orts Illustrated wishes it could take back this magazine cover.

It also reinforces in my mind the thought that the most interesting part of 1998 was the New York Yankees managing to set an American League record with 114 wins that season.

Even though the Seattle Mariners broke that record three years later (just like Barry Bonds came along to top McGwire/Sosa), their accomplishment doesn’t seem as big a deal as what came from the Bronx.