State Sen. Kwame Raoul, D-Chicago, who to the best of my knowledge is the only Chicago politico of 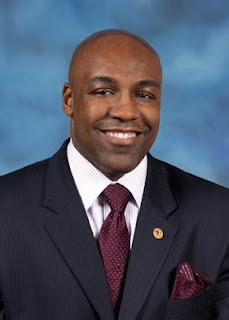 Haitian ethnicity, is doing his part to try to bolster the relief efforts in support of Haiti.

Raoul created a website (http://www.raoulrelieffund.org/) this week that tries to make it easier for people who wish to make financial contributions in support of the relief, which is trying to help cope with the earthquake last week and aftershock earlier this week that has left at least 200,000 dead.

EDITOR'S NOTES: Until now, Kwame Raoul's political claim to fame was that he replaced Barack Obama (http://www.ilga.gov/senate/Senator.asp?MemberID=1496) in the Illinois Senate when the latter went to Washington.

Chicago's Haitian population got a temporary boost this week (http://www.chicagobreakingnews.com/2010/01/evacuees-from-haiti-to-arrive-at-ohare-tonight.html), while Gov. Pat Quinn appeared to be trying to get the votes of their relatives who are already living here.
Posted by Gregory Tejeda at 11:45 PM