Chicago vs. Midwest hurts all 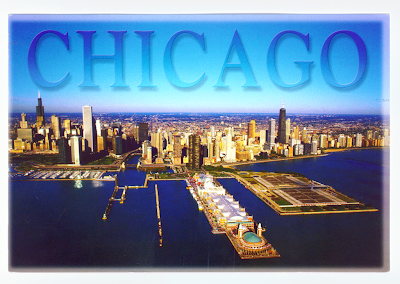 If the Asian Carp makes it to the Great Lakes, this is their eventual point of entry. Image provided by http://www.chicagopostcardmuseum.org/

When Barack Obama won the presidential election, it was done in part with a uniting of the Midwestern states that comprise our region. It was evidence that perhaps Chicago and its immediate neighbors weren’t so radically different from each other.

But anyone who thinks the squabbles that have occurred in the past are a thing of the past ought to think again. Or at least that’s the impression I’m getting from watching the legal brawl that is rising from the Asian Carp situation.

FOR THOSE OF you who can’t bring yourselves to follow too closely anything involving Carp (a truly unglorious type of fish), it appears that the species with the potential to wipe out the ecosystem of the Great Lakes is on the verge of reaching that shore.

Some naysayers will claim they may already be there, but the closest confirmed sightings of the Carp have been within eight miles of Lake Michigan.

To listen to some people speak it these days, it’s all Chicago’s fault. Or, it’s all Illinois’ fault, and Illinois these days is overrun with all those Chicago political types.

MICHIGAN STATE GOVERNMENT is suing Illinois and the Army Corps of Engineers, claiming both are at fault for letting the Asian Carp get so close to the Great Lakes. Just this week, Indiana state government officials indicated they’re going to latch on to the Michigan lawsuit.

I think it will be just a matter of time before Wisconsin, Minnesota and Ohio (if not also Pennsylvania and New York) also join the lawsuit.

Heck, this is one instance where I suspect if downstate Illinois could break away, they’d also file suit – having the entire Midwestern region take on Chicago, which at times can come off as a pompous bully when dealing with its regional neighbors.

Of course, we could keep in mind that the Asian Carp problem began in the South when Mississippi (the state, not the river) fish “farmers” screwed up and let the species into the Mississippi (the river, not the state).

IT WAS THEN that the Carp have worked their way upward until reaching St. Louis, at which point some of them decided to cut across Illinois and head for Chicago. Should we be blaming our downstate Illinois brethren for letting the Carp come so close to Lockport, Ill.?

It strikes me as small-minded that since this truly is a national screwup cutting across our country to think that we now ought to be blaming Chicago-area officials for this. That is what these lawsuits threaten to do.

Michigan’s lawsuit seeks to have the Chicago locks that allow Lake Michigan to have a connection to the Mississippi River to be permanently closed.

Some critics also say that one of Chicago’s great engineering feats – the reversal of the flow of the Chicago River away from Lake Michigan – ought to be undone, and Mother Nature should be allowed to reign supreme with river water flowing into the lakes.

THIS IS ALL just absurd, and at times reeks just a bit much of Michigan people who for years have complained about “F-I-P’s” (Illinois people, with a profanity placed in front) now seeing a chance to dump back on the region’s dominant city.

Keep in mind that I fully appreciate the problem presented by the Asian Carp and the need to come up with a solution as quickly as possible.

But some of the rhetoric being spewed these days in legal briefs has the potential to become incredibly ignorant oral arguments made someday in various federal courtrooms. We’re all just one quirky, short-minded judge away from some serious long-term harm being caused to the region.

Realize that the reasons the Chicago River’s flow was reversed was to avoid pollution being dumped into the river from flowing into the Great Lakes. It also was the result of a cholera outbreak in the late 19th Century that motivated the expensive engineering project that reversed the flow.

DO WE REALLY think that restoring things to the old ways is the right way to go? Let’s not forget that the Chicago River in my lifetime was once classified as a “toxic” body of water. It is now merely regarded as “polluted.”

Do we want to ban the Asian Carp from the Great Lakes at the expense of dumping Midwestern pollution into them? How much would Michigan and Indiana be complaining if that were to be the outcome?

We need a serious solution to this problem, and it probably is one where all the Great Lakes states ought to be working together to try to find it rather than go to court to fight against each other in an effort to assess blame.

EDITOR’S NOTE: The Chicago-area may stretch into Indiana, but there are many people on both sides who view State Line Road (http://nwitimes.com/news/local/lake/article_31366ea3-f606-577e-ab46-38ed782e3f41.html?mode=story) as some sort of impenetrable barrier. Too bad it can't keep the Carp out of Lake Michigan.
Posted by Gregory Tejeda at 12:01 AM

Hi:
here's my posting on the issue...
http://thepoliticalenvironment.blogspot.com/2009/12/boycotts-could-nudge-illinois-to-block.html