Alan Keyes was the conservative pundit who tried to give his political aspirations a jolt at the expense of Illinois, while Drew Peterson is the gu

y who thinks the fact he was once a cop makes him superior to the rest of us minions – instead of just a pinhead.

If it sounds like I don’t think much of either man, you’d be right. But on Friday, it was a rea 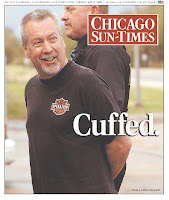 l fight for which one was the bigger goof in the news.

BOTH MEN HAD to deal with the criminal justice system Friday following their arrest, although admittedly Keyes’ criminal case is way less severe than the one confronting Peterson.

The bail amounts both face ought to tell the story. Keyes was one of 22 protesters at Notre Dame University who were arrested on a trespass charge, and he had to come up with $250 in order to avoid having to spend time in jail awaiting trial.

By comparison, Peterson had his bail set Friday at $20 million – a figure that no one expects him to come up with. The point of having such a high bond set in Will County Circuit Court is that the judge was trying to ensure he spends time in jail while he awaits trial on criminal charges that he killed his third wife (never mind what he may have done with wife number four).

Both of these men have been the butt of jokes in recent years. Keyes is the clown who got killed politically when he temporarily became a Calumet City resident so he could run for the U.S. Senate seat from Illinois.

REMEMBER HE LOST by a 7-3 ratio to Barack Obama.

Peterson is that breed of cop who’s basically a clown but thinks his badge gives him some sense of moral superiority. So I’m sure in his mind, he thinks he’s the one rational human being surrounded by a batch of degenerates and nitwits.

I’m not saying that all police officers are like that. But there are some who fall into that category. They’re the ones who become overbearing to deal with because they can use their law enforcement power in improper ways.

So perhaps the biggest question concerning the Peterson saga is, “Why did it take 18 months to come up with an indictment?” Either Peterson’s law enforcement connections were willing to look the other way out of a sense of protecting the image of their “profession” or the criminal case we’re likely to hear in coming months isn’t all that strong.

I DON’T REALLY know what to think of the whole Peterson affair. It isn’t a case that I have enjoyed reading about, and it intrigues me to think that so many people in the public think this is an interesting story.

If it were up to me, Peterson’s indictment and arrest earlier this week would have warranted a one-graf news brief, rather than a sense of major news breaking that literally caused WBBM-TV to point out how close they came to having pictures of the actual moment of Peterson’s arrest – as though it would have been a significant scoop.

As much as it is criminal that Kathleen Savio died apparently due to deliberate human activity and that Stacy Peterson remains missing (and so many people believe she too is dead), I can’t say that I find their stories all that sad.

Pathetic, maybe. But not sad.

THEY DID WILLINGLY subject themselves to Drew. The fact is that he has some sense of personality that draws a certain type of person. If someone chooses to associate with Peterson, can we really be expected to feel all that sympathetic if something bad happens to them?

So now, Peterson gets to sit in a jail cell in the facility located on the southern edge of downtown Joliet (although he jokes about getting “spiffy” outfits to wear and “three squares” to eat). And we’re bound to hear much more about him in coming months, even though his saga is one that I desperately want to wither away.

Yet despite all this, I can’t help but think that Keyes is the more ridiculous character on Friday.

He was at the Catholic university near South Bend, Ind., along with other anti-abortion protesters. They are upset about the fact that Notre Dame is dignifying Obama by allowing him to be a part of the commencement program this year.

THEY CLAIM THEY are merely being good Catholics in line with the portion of church teachings (which aren’t even believed by all Catholics) that abortion is never permissible. What it really amounts to is a group of people with a narrow viewpoint that they’re trying to push off on the general public.

In the case of Keyes, I can’t help but wonder if he’s trying to do anything he can now to attach his name to Obama.

Right now, Alan Keyes’ claim to fame is being the guy who once got annihilated politically by Obama. But I’m sure he’d love it if he could become Obama’s permanent opposition.

Think about it. Anytime Obama says or does something, Keyes will be on hand to speak against it. Keep it up enough times, and people will start to think of Keyes as being the equivalent of the president.

PERSONALLY, I THINK it would make Keyes the equivalent of the Washington Generals to Obama’s Harlem Globetrotters.

But Keyes these days is so desperate for attention that he’s willing to engage in stupid stunts such as the one that got him arrested this week in Indiana (trespassing on private property while pushing a baby carriage with a bloodied doll inside).

Somehow, I think even Drew Peterson would look down on that type of behavior.

EDITOR’S NOTES: Drew Peterson will get another chance on May 18 to convince a judge (http://www.chicagobreakingnews.com/2009/05/petersons-attorney-goes-on-new-media-blitz.html) that his bond should be set at an amount that he can realistically afford.
Alan Keyes would have to enroll at Notre Dame in order to legally be allowed to protest (http://www.chicagobreakingnews.com/2009/05/alan-keyes-among-21-arrested-at-notre-dame-in-obama-protest.html) on campus.
Posted by Gregory Tejeda at 12:01 AM

All I can say is I hope you do not have daughters. How can you actually state that you don't feel sad? As if these women were asking for it? That is exactly what you are implying when you stated what you did. Shame on you. How was Kathleen Savio to foresee that her husband was a narcisstic pathological sociopath? For that matter, the community of the police department that Drew worked for should be held responsible for ALLOWING and ENABLING him to be a cop at 46 and date an immature 17 year old girl while married. SHAME ON YOU FOR BLAMING THE WOMEN. Unbelievable. And in this day and age?