From Guantanamo to Tamms?

It’s more about political grandstanding than offering up a se 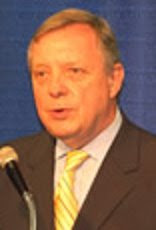 I don’t expect the federal government to take Sen. Richard Durbin, D-Ill., up on his offer to take some of those suspected terrorists who have been held at the military base at Guantanamo Bay (that’s Cuba) and keep them in custody in the depths of Southern Illinois.

DURBIN WENT ON the “Meet the Press” program Sunday, and made his statement that Illinois could easily handle some of those people who think they’re earning their way into Heaven by igniting a bomb or two against the Western world.

Specifically, he’d have them sent to the closed-unit prison built near the town of Tamms – located about 12 miles north of the state’s southernmost tip.

To those of us who rely on newspaper headlines and smart aleck pundits for details, a closed-unit facility is known as “supermax,” although most prison officials I have ever met detest that term.

But regardless of what one calls it, Durbin is offering up our state’s most isolated prison as a place to keep people who view themselves as “enemies” of our nation (or may have mistakenly been taken for terrorists, who’s to say. It’s not like these people were ever tried and found guilty of the allegations against them).

“I’D BE OKAY with them in a supermax facility, because we’ve never had an escape from one,” Durbin said during his interview on the long-running weekend interview program whose ratings have been on the decline ever since host Tim Russert passed away last year.

“We have over 340 convicted terrorists now being held safely in our prisons,” said Durbin. “I just don’t hear anyone suggesting releasing them or sending them to another country. That isn’t part of the program that we have before us.”

The issue of the “enemy combatants” picked up in desolate parts of Afghanistan or other parts of the world and being held in U.S. custody has long been a feisty one.

Former President George W. Bush will have the fact that these people were held in Guantanamo Bay as a negative part of his legacy, and that is what is behind President Barack Obama’s desire to get those people off the naval base maintained by our nation at the southeastern tip of Cuba (the bizarre nature of that deal is a topic for another day’s commentary).

OBAMA IS NOBLE enough in his desire to get these people out of a situation where it looks like our nation is incarcerating them without any concern for their legal rights (and yes, every human being has certain legal rights – that’s part of what makes our nation so noble).

But what do we do with them?

The obvious situation would be to hold them within the existing prison system maintained by the federal government. But the Bureau of Prisons only maintains one closed-unit facility (in Colorado), and officials there have made it clear they’re filled close to capacity.

One broadcast report I heard this weekend indicated that prison in Florence, Colo., had room for only one more inmate. Obviously, there is more than one person being held in Cuba who needs to be put elsewhere.

AND NOBODY IS suggesting that one-time Evergreen Park resident Ted Kaczynski (a.k.a., “the Unabomber”) should be moved to a lesser-security prison so that someone who thinks his ultimate reward is 72 virgins can have his cell.

So what should become of these people who have had a particularly un-luxurious Cuban “vacation” in recent years, and whom the United States would prefer not to have freely in circulation around the globe?

The smart aleck in me wants to welcome Durbin’s suggestion.

After all, if the Illinois Department of Corrections were required to take custody of inmates because of the federal government, it would be able to send a bill to Washington for the expense of custody and care of these people.

PERHAPS ONE KEY to helping plug the state’s budgetary problems is to offer up a few cells in Tamms, with the state adding on a certain “gratuity” of sorts to ensure that a profit is made.

I don’t think we’d want to take on so many people to plug the entire budgetary gap, but a few extra bucks couldn’t hurt.

Nonetheless, I don’t seriously expect anyone to take up this suggestion – even though Durbin has offered up Tamms and Sen. Roland Burris, D-Ill., said last week he’d be willing to have some of those inmates transferred to the maximum-security federal prison in Marion.

I can already hear the outrage of the roughly 5 percent of Illinoisans who live south of Interstate 70 if such “dangerous” people were put in their midst, even though such an argument would be ridiculous.

THE WHOLE CONCEPT of closed unit/supermax/whatever you call it is that inmates are kept in their cells for about 23 hours per day, and NEVER have contact with any human being other than the guard who gets to put them in shackles for the few minutes of fresh air they are allowed each day.

In short, people of Southern Illinois would never see these inmates.

Neither would the rest of Illinois, since Tamms is such an isolated place (I made the drive down there once, it’s not the kind of place one accidentally stumbles across) that one could argue these combatants had more contact with the rest of the world when they were at Guantanamo Bay.

So will it soon become every state’s obligation to take on a few of these inmates (who are a significant part of the Bush legacy) so Obama can try to appear as though he’s being humanitarian? It’s not like life in isolation at Tamms is a picnic.