When it comes to the concept of high school kids skipping directly to professional basketball, I have nev 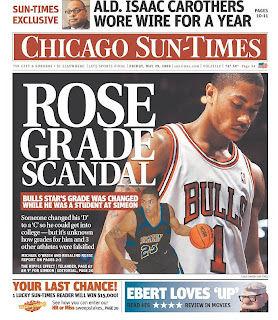 er been one of those people who got all worked up.

I do believe those young people would be better off going to college, being exposed to the academic atmosphere, and possibly even learning something in their courses.

BUT I AM realistic enough to know that some people have little to no interest in academia. Some aren’t cut out for it. There may very well be some young people who spend their every spare minute practicing their dribble and their jump shot – out of the delusion that they will be the one in the few who will be able to play in the National Basketball Association for a long enough time period that they will be able to stash away enough money that they never have to work a real job in their lives.

Probably the only reason many of these young people pay attention to colleges at all is because they know that the NBA uses NCAA Division 1 athletic programs as their minor leagues.

Playing a year or two in college ball is the key to catching the attention of NBA scouts. Otherwise, why bother. The last thing most of them have any interest in doing is playing for all four years of a college athletic career.

That clearly is the mentality behind Derrick Rose, the Chicago Bulls star who once was the big shot ballplayer of a nationally ranked high school team out of Simeon Career Academy – which published reports in the Chicago Sun-Times indicate had people who were willing to tamper with his high school transcripts to bolster his shot of getting into college.

AS IT TURNED out, Rose did one year at the University of Memphis, helping to lead the Tigers to a Final Four appearance before moving on to the NBA and the Bulls – where he may very well be the guy who someday leads Chicago to its seventh NBA title (and its first ever without Michael Jordan).

Officials are investigating whether Rose’s “D’s” were bolstered to “C’s,” and whether someone took the SAT college entrance examination for Rose, in order to improve his chances of being accepted to college.

After all, what good would Rose’s athletic ability be if he weren’t able to take it any higher than leading the South Side high school to state championships?

Admittedly, nothing has yet been proven. This is not a court of law, but Rose is entitled to the same “innocent until proven guilty” standard that everyone in this country is supposed to get when they are confronted with an allegation.

BUT THE SPORTS pundits already are speaking out about the punishment, which is really a joke.

The official record of Illinois High School Association basketball may very well be changed to say that Simeon’s state championship isn’t legitimate because of a player participating in inappropriate activity.

Memphis fans will continue to remember the stellar play that led their favorite collegiate team to a Final Four appearance in the NCAA tourney – even if some sort of asterisk will be put aside their record to indicate that something funky took place.

And somehow, I doubt the Bulls are going to care much – so long as Rose plays well on the court. If he doesn’t, he’ll get traded away, just like the last local high school star who was supposed to lead the Bulls to a championship – Eddy Curry.

A WHOLE LOT of asterisks will clutter up the athletic record books to create the impression that “justice” took place and that punishment was administered. Yet I don’t see it that way.

It’s like a whole lot of athletic record keepers were trained in the old Soviet Union, where negative aspects of history were written out of the books in revised editions. A whole lot of people at Simeon and Memphis will try to act as though Rose is somehow a non-person.

But they’re not about to do anything to get at the real problem, which is kids who probably don’t belong in an academic environment being used by universities so long as their athletic skills can help those athletic departments make a few bucks for their home colleges.

It goes back to the issue of whether kids directly from high school should be playing in the NBA. I say why not, and not just because there are the occasional high schoolers (and younger when one considers the rush of Dominican teenagers who get to play minor league baseball) who make it to the U.S. major leagues.

I’M NOT A professional basketball fan. What interest I have in the game goes to the college level, and I’d rather have that level of the game kept free of this kind of grade-altering (or even the appearance of it).

If it means that the level of ball played at the college level declines somewhat, I can still enjoy the game because my interest in it is in all that athletic “rah rah” spirit. I’d rather not have the ballplayers whose only interest in being on campus is to use the school as the equivalent of a year in the minor leagues before going on to the NBA.

And for those who might be concerned about what happens to Rose, I’m not overly worried about that part of this story. He got through, and he’s a professional.

Rose got the big payoff (unlike the kid who’s a second too slow and never advances beyond small-school basketball), and is now focusing on playing well enough without getting injured to have a lengthy (and wealthy) athletic career.

HE’S NOT GOING to suffer from this. Nobody else will either, in all likelihood.

That is what we should be outraged about.

EDITOR’S NOTE: Derrick Rose’s exceptional athletic abilities are hard to find, which is why someone (http://northcarolina.scout.com/2/493218.html) may have thought that a mere “D” was not worth derailing his potential for a life in professional basketball.
Posted by Gregory Tejeda at 12:01 AM