It shouldn’t be a surprise. Christopher Kennedy (the son of Bobby) has made a life for himself in Chicago. And 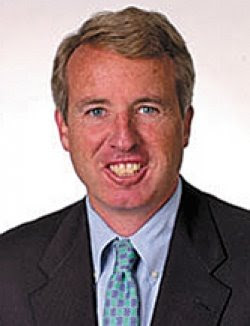 he comes from a family drenched in electoral politics.

So it was only a matter of time before he started thinking seriously of combining those factors and becoming a government official – running for a political post in a city where the magic name is “Daley,” not “Kennedy.”

FOR IT LOOKS like Kennedy, the guy who runs the Merchandise Mart (for many decades, the Kennedy family included the riverfront office building among their real estate holdings), thinks the world needs another Sen. Kennedy on Capitol Hill.

Unlike his Uncle Ted who stood in the Kennedy "homeland" of Massachusetts, Christopher would like to be the junior senator from Illinois.

In short, Christopher Kennedy has aspirations of being the guy who dumps Roland Burris from the U.S. Senate. Considering that the field is going to be crowded enough, I’m not sure what to think of the fact that a building manager with no prior elected offices on his resume wants to have one of the Big Four positions in Illinois politics.

It could be that in a crowded field, the Kennedy “mystique” will be sufficient to generate about 25 percent of the vote – which could be enough to win the Democratic party’s nomination in 2010.

WE COULD VERY well get a 21st Century sequel to the 1960 presidential campaign. That is the race where Richard J. Daley’s political organization (the dreaded Machine) turned out the vote to win Illinois’ electoral votes for John F. Kennedy.

Now, it could turn to Richard M. to get the powers that be of local politics to put aside their own elective ambitions to turn out the vote for Christopher come next November. For his part, Daley says he thinks the “Kennedy” name has a magic in Illinois.

On the one hand, it would be intriguing to see an “outsider” such as Christopher Kennedy run for office in Illinois. Next year is going to be the campaign where Republican officials at every level will scream the name “Blagojevich!” at every opportune moment (and even a few occasions where they make themselves appear gauche for doing so).

Because he has not held elective office, and hasn’t done much politically other than write out checks to make donations to favored candidates throughout the years, Kennedy might actually be able to dodge such accusations.

HOW COULD HE be just another “corrupt Blagojevich Democrat” (how many times will we hear that phrase?) when he has never been elected to anything. Yet that Kennedy name will draw national attention, which would make it easy for him to tap into sources for fundraising.

But I’m sure there will be people who will resent his presence, and will try to make him out to be some foreigner to this state – even though he has lived and worked in Chicago for decades (longer, I’m sure, than Barack Obama, who is now our ultimate “favorite son” on the national political scene).

I’m sure people like Burris, Jan Schakowsky, Alexi Giannoulias and anyone else with dreams of being in the U.S. Senate will start sniping at the Kennedy name, trying to make it seem as though some Massachusetts guy wants to steal a Senate seat from Illinois the same way Alan Keyes of Maryland tried to do in 2004.

I’m also sure that the hostility he will face will be comparable to the attacks sustained by Caroline Schlossberg. The daughter of JFK had her own dreams of being in the U.S. Senate from New York when Gov. David Patterson had the chance to fill a vacancy created by the resignation of Hillary Clinton (herself a Park Ridge native).

BUT SHE GOT hit with all kinds of accusations that she was totally inexperienced and knew nothing of the ways of public policy and public life. I can guess the campaigns against Christopher Kennedy in Illinois will echo that rhetoric – only more harsh.

Personally, I’m not sure if I’d vote for Christopher Kennedy. That is assuming he does proceed with plans to seek the nomination. I’d have to hear more about what he stands for.

But you have to admit it would have been the ultimate in bizarre if Caroline had become the senator from New York, with her cousin Chris being the senator from Illinois. The kids of JFK and RFK on Capitol Hill.

I’d feel all Kennedy-ed out. For those people who used to make an issue out of the fact that a Hillary Clinton election as president would have given us at least 24 years of the U.S. presidency being controlled by two families, I’d say the spread of Kennedys across the country makes the Bushes and Clintons seem like small change.

ACTUALLY, THAT IS the ironic part of this Kennedy conspiracy. Christopher isn’t even the first Kennedy to think of running for electoral office in our city.

One of the founders of the Center for International Rehabilitation who is most remembered for a 1991 rape trial in Florida (where he was acquitted) gave some thought back in 2001 to running for a U.S. House of Representatives seat from the Northwest Side.

That’s the one Rod Blagojevich gave up to run for governor in 2002.

EDITOR’S NOTE: A modern-day Daley thinks a modern-day Kennedy could do well politically (http://www.suntimes.com/news/cityhall/1583041,daley-kennedy-chris-caroline-052009.article) on the Chicago scene.
Posted by Gregory Tejeda at 12:01 AM