It strikes me as ironic that one of the the Iraq casualties to occur on Memorial Day this year was a fellow Chicagoan. By now, we’re getting the reports of how one-time Illinois 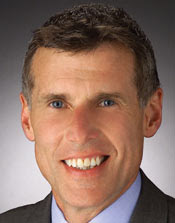 Commerce Commission chairman Terry Barnich was killed by an explosion while working in Iraq.

It has been several years since I last saw Terry Barnich (it was back in the late 1990s when I was a reporter-type at the Statehouse in Springfield and he’d be hanging around the building working as a lobbyist for various interests).

YET THE STRONGEST memories I have of him go back to the days when I worked for the now-defunct City News Bureau of Chicago. I was the reporter for the local wire service based at the Thompson Center state government building.

As things worked out, the press room in that grandiose government building that sprung from architect Helmut Jahn’s vision was located on the same floor as the Illinois Commerce Commission offices. In fact, the press room was near an obscure back door that one could take to get past the ICC’s front desk and go directly to the chairman’s office.

I know, because there were times I managed to get statements directly from Terry Barnich by making the roughly 25-step walk from my desk to his.

Some people might think that was presumptuous of me. But security in that building back in the early 1990s wasn’t as rigid as it is these days, and a reporter usually comes to appreciate any time he (or she) can get direct access to political people – rather than having to rely on the canned statements put out by their press people.

BARNICH ALSO WASN’T exactly the type whose first response would be to call security and have me removed.

In fact, Barnich was usually the type who would spend his spare moments making the same walk in reverse – popping into the press room to shoot the breeze with reporter-types for City News, the Chicago Tribune and the Illinois Radio Network (which back then were the only news organizations that thought the state building worthy of staffing).

Now I’m not going to start nominating Terry Barnich for sainthood just because he was a little easier to talk to than some government officials (I’m talking about the types who want you to think they’re doing you a favor by acknowledging your existence).

Part of what came from his mouth was pure political spin (he was a Republican of the James R. Thompson mold). He was just as interested in getting his perspective included prominently in any stories written about him as any other political person.

BUT I HAVE to admit that part of the practical knowledge I have accumulated from some two decades of observing the Chicago and Illinois political scenes came from Terry Barnich – both in terms of watching him and listening to him when he worked.

There also were the moments when he’d tell us the little anecdotes of what it was really like to work for Jim Thompson – who by that time was approaching the end of his record-length 14-year run as Illinois governor.

Barnich was a guy who literally started out at the bottom of Illinois government (I recall him telling stories of what it was like to be a young law school graduate who held the governor’s coat or took the gubernatorial dogs for a walk), but worked his way up and ultimately became head of a state agency.

I’m sure on a certain level, he viewed those trips to the press room as being a part of the job to try to keep us reporter-types under control. I’m sure he had that attitude because I can remember a couple of times he would storm into that press room in anger – acting almost as though he thought we had betrayed him.

BETRAYAL, OF COURSE, isn’t the right word, even though there were stories that would paint the Illinois Commerce Commission (which regulates utility companies and any other business interests such as railroads that cross through Illinois and other states) in a negative light.

That is part of a reporter-type’s job – to tick off political people and occasionally bite the hand of the occasional politico who comes by willingly.

But while there are some political people in this state who have shown an ability to hold a grudge against me, I can’t say that Barnich was in those ranks.

Eventually, Barnich went the route of many a government official – he gave up a spot on the public payroll for the private sector. In his case, he became a consultant. Like I wrote earlier, for a few years he was one of the lobbyists pushing for the political interests of whichever company was paying him.

EVENTUALLY, HE MOVED on to a bigger scale – choosing to try to earn his living by being a part of the coalition trying to rebuild Iraq into something resembling a Democracy.

I can’t say I had kept in touch with him, but I must admit to having always gotten a kick out of the idea that somebody I knew “way back when” had moved up to such a reputable post.

He had been in Iraq for just over two years, working as a senior advisor for the State Department’s Iraq Transition Assistance Office. I actually found an interview he gave early in 2008 where he said he expected to be back in the United States to stay by April 1 of last year.

But just as the Iraq situation isn’t resolved, neither was his work. Which is why he happened to be a part of a convoy on Monday that was returning from a wastewater treatment plant inspection when it was hit by a roadside bomb. Barnich was one of three killed in the explosion.

SO IN THE case of the life of Terry Barnich, we’re talking about a guy who worked his way out of the South Side's Hegewisch neighborhood (he was a 1971 graduate of Washington High School) up through the ranks of the Statehouse Scene before achieving some moments of significance trying to bring stability to what has become a troubled region.

It’s just a shame he couldn’t live long enough (he was 56) to see if his work would end in success.

EDITOR’S NOTES: I found it most ironic to read of how Terry Barnich narrowly escaped (http://www.phoneplusmag.com/articles/personality_plus_terry_barnich.html) death during a past explosion – 44 paces and eight seconds, by his estimation. He wasn’t as fortunate (http://www.cbsnews.com/stories/2009/05/26/iraq/main5039228.shtml) this week.
Posted by Gregory Tejeda at 12:01 AM