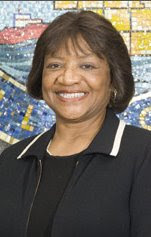 It was during the debate over whether or not to overrule President Todd Stroger’s veto of a repeal of a portion of the county sales tax that Collins said she thought the people so eager to repeal the tax were wrong. She also said she realized that some people would try to use her view against her.

BUT THE WAY she worded it makes it likely that video of her comment will be used in a spot against her, or against Stroger, or anyone who backs Stroger.

As Collins put it, “If you don’t like it, you can vote me out of office. Honestly, I’d love to go home for once in my life and just relax.”

I can already hear the narrator telling us in an ominous voice, “Let’s send them all back home.” We'll have to wait to see if this rivals the sight of Judy Baar Topinka doing the polka with George Ryan when it comes to campaign potential.

By the way, Collins’ tough talk amounted to little. She voted “present” when it came to the attempt to override the sales tax increase desired by Stroger – which only got 11 votes, three short of the 14 actually needed (out of a 17-member county board) to override a county president’s veto.