I’m curious to see what becomes of ChicagoNow.com.

It doesn’t exist yet. In theory, it is meant to begin operations some time in June. But it is an attempt by Tribune Co. to create several weblogs and sites on the Internet that people could turn to when they are looking for information about Chicago and surrounding area.

TO ME, IT sounds like someone thinks the future of the Chicago Tribune is to be gutted into parts, with those of particular interest being used to develop several new products of a small nature rather than one giant all-purpose newspaper.

If it means the brand name and reputation associated with Chicago Tribune (which is both good and bad, depending on who one speaks to) lives on, then perhaps this gesture is one that recognizes the future.

While I personally am a person who prefers to read copy off the printed page rather than off a computer screen, I am realistic enough to know that there are some people who are deluded enough that they’d rather read off a screen. 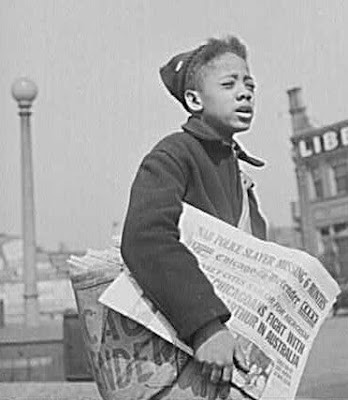 The "newsboy" already is an excinct species in Chicago. How long will it be for the printed product he carries? Photograph provided by the Library of Congress collection.

Actually, most of them are merely interested in finding video snippets, rather than reading anything. But, that is their choice. This is a free country. Who am I to tell them to do differently?

BY PUBLISHING THIS weblog (along with its sister site, the South Chicagoan), I am getting just as involved in these types of operations as anyone else.

What should we think of these outfits? I’m waiting to see the quality of the content offered up. In theory, it sounds like they’re talking about trying to get people with some sort of specialist knowledge to write about specific issues.

Yet when I hear that one-time White Sox pitcher Jack McDowell is supposedly one of their “experts,” I have to wonder if this is going to be yet another effort to pander to celebrity trivia.

On the other hand, I also understand they’re considering a weblog about baseball by a White Sox fan who has written several intelligent profiles and interviews for the site http://www.whitesoxinteractive.com/.

SO WHILE I like the idea of the Tribune trying to salvage itself for the future, I want to know how much of their content is going to be substantive.

Is the future of the business going to be something along the line of people who can write an intelligent thought or two (or show some sort of ability to garner stories) having their weblog or website become affiliated with a company that can pay them for their work?

Does this mean I ought to be trying to get this particular site affiliated with Tribune Co?

While the paycheck (and I don’t know what kind of compensation they’re offering to people, for all I know, they may be going the route of Huffington Post and expecting people to write for free so that Arriana doesn’t incur expenses for her website) might be nice, I’m not sure I’d want to be included.

I ENJOY THE certain level of freedom of knowing that I don’t have to match a publisher’s ideological bent, and that the only restriction I have on whether something ought to be written is whether it is factually accurate. And in all honesty, I have no indication that the Tribune Co. would be interested in working with me.

But I may have to think in terms of becoming affiliated with somebody someday. Because it may well turn out that the amateur weblogs of the future will be the ones that are largely worthless to read – unless one wants nothing more than cheap one-liners about someone else’s work.

That leads me to the future of the Chicago Sun-Times, whose demise people have predicted for years (I remember one now-retired Sun-Times reporter who was convinced the paper would not live long enough to see the 21st Century).

It would appear there actually are potential buyers for the paper, and all the sister publications it acquired during the past two decades throughout the suburbs. Crain’s Chicago Business says there might be a sale within 60 days.

FINANCEER JAMES TYREE talks of wanting to save a news resource, and says that he’d be willing to put together a group of local business types to buy the paper for the right price. It appears that “right price” includes having the Internal Revenue Service accept some sort of reduced price on the tax debt incurred by Conrad Black – who was always particularly adverse to having to pay the IRS what the company owed to the federal government.

I get the impression that to the degree Tyree views the paper, he sees it as a series of news assets that could be split up into smaller operations – ones that could be covered by the company’s current revenues.

Could we someday get BrightOne.com (or some variation thereof) that tries to carry on the newsgathering legacy of the Sun-Times? Is the Chicago newspaper fight destined to become an Internet battle between BrightOne (or whatever they wind up calling it) and ChicagoNow?

To me, it doesn’t the same romantic feel of newshawks peddling papers, or being able to drop some change into a newsbox to check out the day’s news. Clicking on my laptop will never be as much fun as kicking back and reading newsprint pages.

BUT IT COULD be the way in which the news wars that our city has seen manage to evolve themselves into the 21st Century technology.

And that would be, in my opinion, a good thing for the city and its character.

EDITOR’S NOTES: In all fairness, I must admit to learning of ChicagoNow (http://www.chicagobusiness.com/cgi-bin/article.pl?articleId=31702) and James Tyree (http://www.chicagobusiness.com/cgi-bin/article.pl?articleId=31698) from the same source. Crain’s Chicago Business did the actual heavy lifting of reporting these stories.
Posted by Gregory Tejeda at 12:01 AM