Will Todd Stroger get I-57 some day?

those who are curious about every form of trivia, the namesakes of Chicago’s expressways are as follows:

Jane Addams – First U.S. woman to receive the Nobel Peace Prize, and founder (left) of Chicago’s Hull House, the site of which takes up land that the University of Illinois at Chicago wishes it could change into something more commercial, but doesn’t dare.

William G. Edens – A banker who sponsored Illinois’ first highway bond issue in 1918. Without him, we might still be driving around on dirt or gravel roads.

Dwight Eisenhower – The former general who “won” the Second World War and the president who signed into law the measure creating all interstate highways, which means he had to get something named after him.

p L.F. Ford – Former presiding bishop (left) of the Church of God in Christ on the South Side. With more than 8.5 million members, he qualifies for membership in the Road Namesake Club.

Ronald Reagan – Former U.S. president who was born in Dixon, Ill., and attended college in Eureka, before ditching Illinois for a life in California.

Dan Ryan – Former president of the Cook County Board. I wonder what current president Todd Stroger will get named for him someday – we still have the Ch 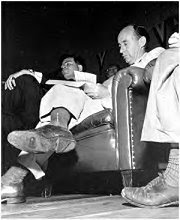 icago portion of I-57 nameless.

Adlai E. Stevenson II – The attorney from Bloomington (right) who served as Illinois’ governor and U.S. ambassador to the United Nations, but is mostly remembered for getting his butt kicked twice by Ike.