What’s the true purpose of a political poll?

I find polls taken during a political campaign to be intriguing. I find them to be an up-close look at the electorate and what they think about certain issues and people, and why.

Of course, most people find them confusing because they don’t truly understand what it is they should be looking for, or just what it is the poll results are really telling them. So they get frustrated when the poll results from weeks or months before Election Day vary so greatly with the actual election results.

WHEN LOOKING AT the results of a political poll, there are two factors to keep in mind. The “bottom line” figures of who is leading are often the most irrelevant part of the poll, and the accuracy of a poll depends greatly upon who is being surveyed.

All polls are 100 percent accurate in reporting what it is that the potential voters said. Whether the voters follow through with their talk is the key to determining whether the poll results will match the future reality.

The most important factor is to consider that polls take a small sample of people, figuring that by choosing them at random, one is getting a chunk of the U.S. population that is representative of the nation as a whole. 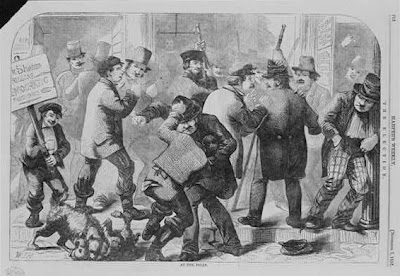 Election Day voting is more accurate than any given poll, particularly if activity at the polling place gets as ugly as in this 1858 Election Day cartoon in Harper's Weekly. Illustration provided by Library of Congress collection.

The Gallup Organization polls typically try to survey 1,000 people per day, before compiling results to tell us who is leading and who is not. Who’s to say the findings of any one day do not lean too heavily on one segment of the population, thereby distorting its results.

TAKE THE GALLUP polls for the Democratic presidential primary.

Gallup released results during the weekend that said Barack Obama had a 10-point lead in support over opponent Hillary R. Clinton (52 percent to 42 percent) on March 29. One day later, he still had a sizable lead – although his support dropped to 51 percent.

Did something really happen so dramatic during those days that Clinton suddenly gained in support? Could it be that Obama’s double-digit lead never really existed – except among the 1,000-or-so people who happened to get a telephone call from the Gallup group in the days leading up to those results?

OR PERHAPS A larger-than-usual batch of Clinton supporters received a call for the polls leading up to Tuesday’s results. Does this mean that Obama’s drop to a 4 point lead (which could really be only a 1 point lead if the margin of error is taken into account) never really happened?

I would like to trust the results of the other survey released Tuesday by the Gallup group – one that can be interpreted as meaning that the American people do not want to see an Obama/Clinton (or Clinton/Obama) pairing at the top of the Democratic ticket on Election Day.

Fifty-five percent of Democrats and independent voters leaning toward Democrats want Obama to have someone other than Hillary as his running mate.

Such results could mean that the voting public is realizing that the two candidates are too similar to each other and the presence of the other on the ballot would add nothing to the party’s chances of winning control of the presidency for the next four years come November.

BUT TO ME, the most significant figure offered up in this batch of poll results was 58 percent. That is the percentage of the 1,000 people questioned in recent days who said they would want Obama to be the vice presidential nominee – should Clinton win the Democratic presidential nomination.

That indicates that a good chunk of the population likely wants Obama to have some sort of presence in the White House, whether he gets to work in the Oval Office and live down the hall, or has to settle for life at Number One Observatory Circle (the official vice-presidential residence).

That could be the ultimate sign that Obama is handling the fiery rhetoric by his pastor, the Rev. Jeremiah Wright, properly. If people were truly as disgusted as some of the conservative pundits want us to believe, Obama’s figures would be dropping – people would be looking for him to whither away politically, not remain in a position of authority.

Now there’s always the possibility that I’m selectively looking for results to back up my own beliefs – I already cast my ballot for Obama and his pledged delegates from my congressional district. Of course, that’s also true for anyone doing poll analysis.

IT ALSO IS why I am skeptical when political people say they never trust the poll results done by commercial groups and often commissioned by large news media organizations that want to have something of their own to take credit for. They always say their own internal polls are more reliable.

Actually, they often ask different questions that are meant to inspire people to answer in a particular way – which can distort the results in terms of trying to determine the actual “mood” of the people, rather than the “mood” as the political person wants it to be.

Even when internal polls are more reliable, it more often than not is because political people have a better sense of what to look for in the numbers. Rather than trying to focus on the “bottom line” figure, one should look at any kind of breakdown of different groups and who they are supporting (or rejecting).

Getting a sense that any one group differs from the majority is the relevant fact. One can then decide whether a campaign strategy change would help shift that vote, or whether it should just be “written off” and attention focused on the groups that do like a particular candidate or strategy.

BUT SOMETIMES, POLITICAL people use polls to try to reassure themselves that their efforts are not in vain.

I still remember the 1998 Democratic primary election for Illinois governor, when in the final weekend before the election, the campaign of John Schmidt publicized its internal polls showing him with a slim lead over all three of his opponents.

The Schmidt campaign made a point of saying it was through discussing poll results because, with the election so close, they had the lead. What more was there to say?

In reality, the Schmidt campaign had a slim lead, but other polls showed they lost it in those final days. In fact, a good chunk of Schmidt backers chose not to even bother to vote, and he wound up finishing that primary in third place.

FINALLY, THERE’S ALSO the fact that pollsters are human. They can miss things.

Take the American Institute of Public Opinion (which has since morphed into the group that bears founder George Gallup’s name) surveys of the 1948 presidential election, all of which showed Republican Thomas Dewey handily defeating incumbent Harry S Truman – who had one of the highest unpopularity ratings ever for a president.

But they stopped polling a few weeks before the election, which meant they missed the factor of a lot of “third-party” supporters who decided to back Democrat Truman rather than Dewey of the GOP.

THAT FACT CAME out when, in the weeks after the election, Gallup’s people re-surveyed everybody they had previously polled to try to find out who changed their mind, only to find out that no significant numbers of Democrats or Republicans did so. Their after-election poll showed Dewey won (and the Chicago Tribune would have been accurate).

Polls are only as good as the information that goes into them. Which is why the political people are not wrong when they spout their cliché “The only poll that matters is Election Day.”

An actual vote is always more accurate than a promise of a vote.