We can't escape the debate on race

TINLEY PARK, Ill. -- I was out Monday in the land where Cook and Will counties converge in a series of zigzags s 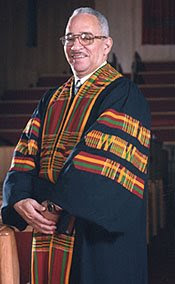 o numerous that one often has to double check to see which county they are standing in at any one moment in time.

The Odyssey Club is a housing development at the edge of the southwest suburban village adjacent to a private golf course that obviously is built on farmland; the plots across Vollmer Road remain empty and could still accommodate crops.

YET IT IS clear that this housing subdivision is meant to be an upscale development that sparks urban growth into the area and will obliterate all the open land within a decade. Odyssey is located all of what will someday be just a few blocks from a high school (Lincoln Way-North in Frankfort Township) and is one mile straight south of the Brookside Marketplace shopping center, the location of the Lane Bryant store that was the site of the still-unsolved quintuple slayings earlier this year.

Now, the neighborhood gets another bit of notoriety – it likely will be the future home of the Rev. Jeremiah Wright. He’s the retired pastor of Trinity United Church of Christ, who until recently was known to the public as the personal pastor of such African-American celebs as Oprah Winfrey and Sen. Barack Obama, D-Ill., just to name a few.

Now, of course, he’s the black preacher who illustrates perfectly the difference between the way many white and black people view the racial situation in this country.

Wright’s rhetoric offends many white people who don’t want to have to confront the racial tensions that still exist, while many black people are willing to accept Wright’s rabble-rousing rants on the grounds they understand the perspective that motivates such distrust of the white majority amongst older black people in this country.

WRIGHT WILL GET to spend his retirement years outside of the South Side. His church bought the site in the housing development under construction, and is arranging for a new home to be built for Wright’s personal use.

The SouthtownStar newspaper reported (in dramatic fashion on the front page of Saturday’s newspaper) that the home will include a family room with fireplace and bar, an exercise room, four-car garage, a master bedroom with a whirlpool and custom shower, and also another room that could be adapted in the future to include either an indoor swimming pool or a private movie theater.

I must admit that when driving past the area on Monday (the development is fenced in, and I wasn’t willing to risk arrest just to get up to the actual site of the house), the first thought that ran through my mind is that the development was not where I initially would have expected Wright to retire.

The Chicago south and southwest suburbs are developing larger African-American populations, but there are still some towns that remain overwhelmingly white in complexion and where the locals grit their teeth at the sight of a black person in their midst.

My point is to say that many of Wright’s immediate neighbors are going to be surprised when they learn which celebrity pastor is living in their midst. One village Trustee, Greg Hannon, alluded to such an attitude, telling the SouthtownStar newspaper that Odyssey is, “where people kind of decide to get away from things.”

But I think Wright’s moving into the neighborhood is a good thing. I’d like to think it will force some people who wanted to avoid having to think about race to have to address the issue. It also will do some good if area people come to see Wright as just another human being – shopping for groceries at the local SuperTarget or stocking that potential home theater with equipment purchased at the local Best Buy store.

Insofar as it relates to the presidential primary, it was naïve for the Obama campaign to think it could get through an election cycle without ever having the racial question come up. In fact, it would be wrong to think that the issue is one that should not be discussed.

THE LINGERING RACIAL distrust that remains in the United States (and threatens to undermine many of the accomplishments made in this country) isn’t going to go away until people of all races confront their attitudes honestly. It is not a problem that will go away on its own once everybody who was alive when segregation was legally acceptable has died off.

It also is obvious (to me, at least, since I still remember the Chicago mayoral elections of 1983) that the first election of an African-American as president (or even someone of bi-racial heritage like Obama) is going to come about despite the efforts of an outspoken few to whom the idea is anathema.

We have to confront the issue. It’s not like Obama can pretend he’s not African-American, anymore than Harold Washington could have gotten through a mayoral campaign without race being an issue (although Washington himself would joke that people opposed him because, “maybe they don’t like the way I part my hair?”)

It is once we have confronted the racial issue and forcibly pushed it aside that we can then view future African-American political candidates more clearly on their merits.

NO FUTURE AFRICAN-American person who runs for Chicago mayor will go through the same grief that Washington went through, and Obama is going to get hit with some things in the next few months because of his racial composition that no political person in the future will have to deal with – if Obama deals with them in a manner befitting class and his professional and academic qualifications.

And insofar as Wright is concerned, I hope he enjoys his new hometown. I hope that local half-wits don’t take it upon themselves to try to make the reverend uncomfortable there.

Despite the Lane Bryant slayings, Tinley Park is a fairly quiet community with many amenities nearby. That is why the people who live there (including my mother) chose the community to begin with, and I expect it is why Wright wants to spend his retiring years there.

See, they already have something in common.

EDITOR’S NOTE: Is the SouthtownStar trying to alert the public to the “menace” in their midst (http://www.southtownstar.com/news/867089,032908wright.article) with their front-page coverage of the fact that the retired Rev. Jeremiah Wright is having his church build him a home in the Chicago southwest suburbs? That was the tone of the story the newspaper published, and which the Chicago Sun-Times reprinted.